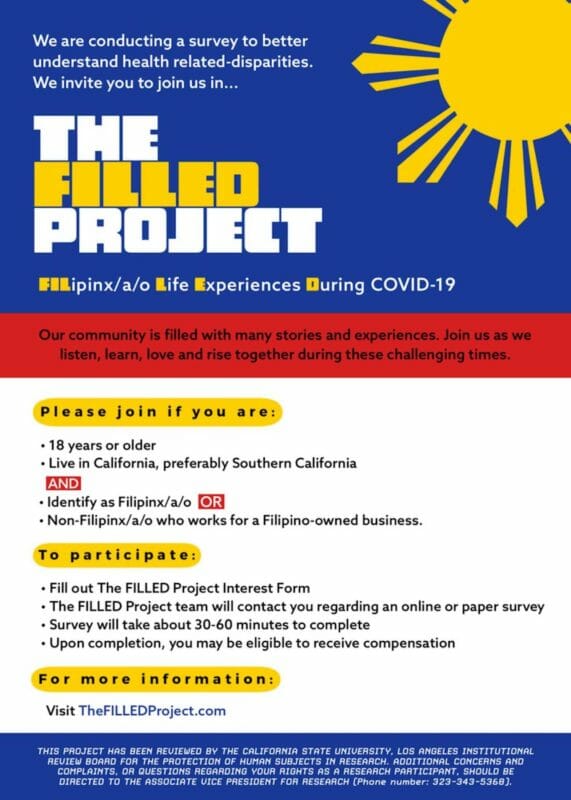 The Filled Project survey was conducted to understand Filipino American life experiences during the pandemic.

The Covid-19 pandemic has exacerbated underlying mental health issues for Filipino Americans, according to preliminary findings from a recent survey, yet nearly one-third of respondents did not receive treatment or the help that they needed.

The Filled Project survey was conducted to understand Filipino American life experiences during the pandemic. Findings were shared with the public during a virtual town hall on Oct. 28.

Findings on mental health are particularly salient given that depression expected to become the leading cause of disease burden across the world by 2030, said Melanie Sabado-Liwag, principal researcher for the survey and a public health professor at California State University, Los Angeles.

“That was disheartening because although Filipinos have access to medical and health care services, and they’re not accessing [them],” she said. “It could be that they probably just don’t know. And then there’s also a stigma that we still have to overcome in the community.”

Precisely how the pandemic has affected Filipino Americans is unclear due to the way data collection in the United States aggregates Asian American subgroups into a single category, which masks the specific needs of each group.

But the findings in The Filled Project survey with regard to mental health reflect a trend captured in the Filipinx Count Survey, conducted by the UC Davis Bulosan Center for Filipino Studies during the first half of 2020. It found that 85 percent of respondents who reported certain mental health symptoms and issues attributed them to the pandemic.

Researchers who conducted The Filled Project survey also found that more than half of respondents said their physical and/or mental health impaired their ability to function for at least one day out of the month at the time that they took the survey.

Sabado-Liwag said the findings are important because they show the number of health concerns facing Filipino Americans that are often overlooked and that the community has been severely affected by the pandemic.

The survey also included questions around health seeking behaviors and found that the vast majority of respondents get health information from the Internet, followed by friends/coworkers and family.

More than three-quarters of those who took the survey said they trust doctors and medical professionals for health information, though more than half said they might question that information based on their own research.

“This proves the importance of the medical care team because people do rely on them to help them make decisions, although it’s different from where they’re getting information,” she said. “We wanted to see that parallel of where people are getting a lot of information, but it doesn’t mean that they trust them.”

“We are perceived as high income earners and highly educated, so any type of dissonance that we might experience from other people outside of our culture, we just take as if it was normal,” she said.

Of respondents who have experienced discrimination, the majority said they were discriminated against by other Filipino Americans. More than half of those respondents said they experienced discrimination because of their ethnicity and appearance. Sabado-Liwag the findings are reflective of colonial mentality, a term often used by ethnic scholars to refer to a form of internalized oppression in Filipinos and Filipino Americans. She added it also contributes to mental health fatigue in the community.

The next step for researchers is to conduct qualitative studies among seniors and caregivers to gain a deeper understanding of the findings, to collaborate with community groups on how to move forward with the data and to conduct a deeper analysis on the differences in experiences reflected in the survey.

The Filled Project survey was conducted from March to September. Findings are based on responses from 247 people. Some of the study’s limitations include the sample size, which isn’t sufficient for results to be generalized across all Filipino Americans, and that outreach for respondents was conducted entirely online.