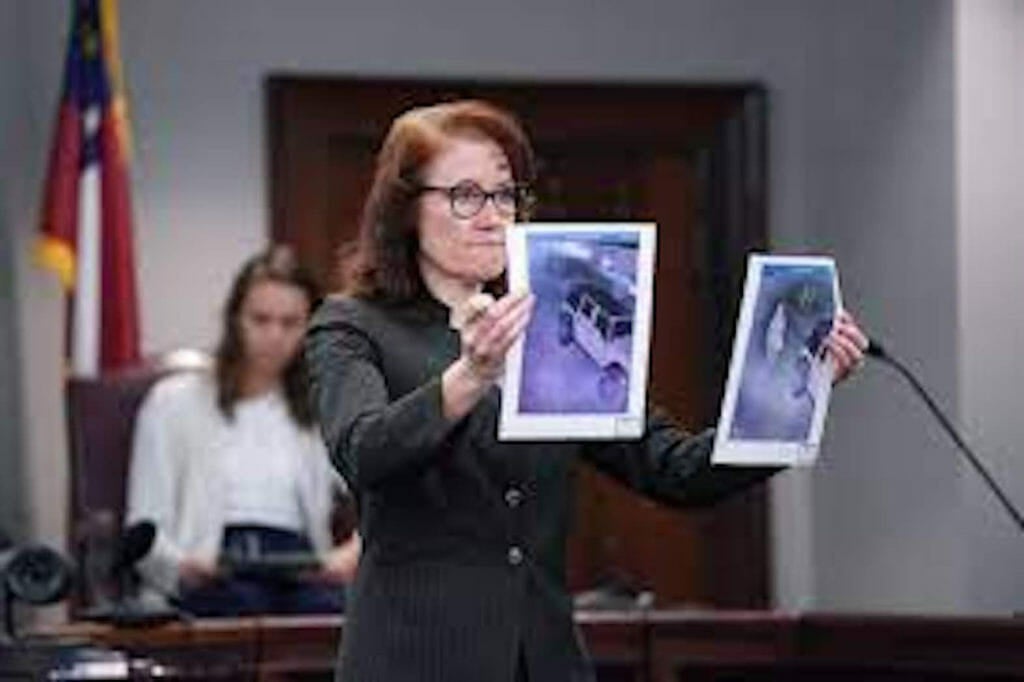 Prosecutor Linda Dunikoski shares evidence during the trial of the killers of Ahmaud Arbery at the Glynn County Courthouse in Brunswick, Georgia, U.S., November 18, 2021. Sean Rayford/Pool via REUTERS/File Photo

I’m still digesting all that’s happened this Thanksgiving holiday. I’m vegan, so it was all fake turkey. But the justice was real.

And boy, did we get a major helping of it this year when a jury found Travis McMichael, Greg McMichael, and William Roddie Bryan all guilty of felony murder in the Ahmaud Arbery case.

It almost didn’t happen. Remember, when no arrests were made in this case until after 74 days, it seemed like we’d be stuck with small-time justice of 19th century Jim Crow America

But fortunately, prosecutor Linda Dunikoski knew how to get a nearly all-white jury to find three white defendants guilty of killing an unarmed black man in the Deep South.

Sadly, even in 2021, the odds of that are not good. But then Dunikoski showed us all how to do the near impossible.

That’s why when a friend asked me how I would spend the four-day weekend, I said I’d be meditating. Truthfully, it was more like savoring what I had just seen of the trial on TV.

Asian American Filipinos know how hard it is to come by. Just look at the Vincent Chin case. No one has ever served time for Chin’s murder nearly 40 years ago.

And this is our common ground with all BIPOC (Black, Indigenous and People of Color) communities–our united struggle for justice in America.

So when it happens like it did in the Arbery case, it’s our cue to bow our collective heads in gratitude. Justice is real.

Lord knows, the Arbery trial was not easy.

I mean you were watching weren’t you?

When I asked Prof. Dan Gonzales, of the College of Ethnic Studies at San Francisco State University if he thought Filipinos, and other Asian Americans were paying attention to it, he said probably not.

“I think it’s relatively few,” Gonzales told me on my Emil Amok Takeout program No. 187, “They don’t see their situation as being similar to that of African Americans, that also suffer those kind of confrontations, those kind of crimes. They just see them in reference to themselves and their own experiences.”

In other words, our racial empathy, just isn’t what it should be.

And yet there were lots of reasons we all should’ve been paying attention to the case that is the latest and most ingenious way to beat a form of white privilege—white defendants who escape conviction in crimes against BIPOCs.

Justice in the Deep South

The case was in Georgia,  where the racism runs deep and Asian Americans are among the fastest growing groups in the state. We’re the new minority.

It’s the place where Robert Aaron Long, the shooter already convicted of four of the eight Atlanta spa murders, coincidentally made an appearance in court in Fulton county last week for the other four people he’s accused of killing. In all, six of the eight dead in the spa shootings were Asian Americans, a case that was a milestone in anti-Asian scapegoating during the pandemic. To date, the number of transgressions toward Asian Americans across the nation has climbed to more than 10,000, according to the group Stop AAPI Hate– everything from racial slurs to murder.

If you’ve been worried about Asian Americans getting justice in the spa murders, I’d say the guilty verdicts for the Arbery defendants should make us all feel a little better.

Dunikoski, the prosecutor in the Arbery case, was brought in from Cobb County, but spent most of her career in Fulton County. And that’s probably why justice was ultimately served in rural Brunswick, Glynn County, Georgia.

It had to be imported.

It was a necessity. Of the two prosecutors previously assigned, one had a relationship with the defendant Greg McMichael, a former police officer there. That DA has now been criminally indicted for her actions in the case. Another prosecutor also recused himself. Everyone seemed all too willing to buy the story that the McMichaels and Bryan were just protecting their community.

“Citizen’s Arrest” was the claim, an antiquated law that no longer exists in Georgia, but did during the crime. I had only heard the phrase decades ago on the old “Andy Griffith Show,” when officer Barney Fife used to yell it out loud for laughs.

But this was no laughing matter.

When the phone video William Roddy Bryan took of Travis McMichael was leaked, it was clear. This couldn’t be swept away, not when the video showed McMichael pointing his shotgun at an unarmed Arbery, who then struggled over the weapon and was shot.

The 911 call also made it  clear that Arbery’s only crime appeared to be jogging while black.

Dunikoski used both the leaked video and the 911 call to methodically  dismantle the defense. Unless the McMichaelssaw Arbery in the commission of a crime, no such “citizen’s arrest” could be made.

Still, even with the evidence and the facts on the prosecution’s side, I wasn’t sure what the verdict would be. That’s the power of a nearly all-white jury as an obstacle to racial justice.

Appealing to the good in latent white supremacists

Some people criticized Dunikoski for not bringing up race more often in the trial. For example she could have depicted Arbery  as  essentially being “lynched” by vigilantes with a mob-like mentality.

But the prosecutor knew how not to alienate a jury that may be sympathetic to the defendants.

“Y’all are really, really smart,” Dunikoski told the jury, appealing to vanity. “You’re going to determine what really happened based on the evidence and you’re going to apply the law.”

And then she said the magic words, appealing to the potential “good ol’ boy” in all of them.

It was a touch of genius. No one was passing judgment on racist actions.

And then Dunikoski assumed the guilty verdict. “When you come back with a guilty verdict on all the charges,” she said, “what you’re saying is you know who did the crime, now we (all) know.”

She didn’t have to mention race. Not like the defense lawyer for Bryan, Laura Hogue, who described Arbery as a man who was running in shorts, sockless, adding a detail about his “long, dirty toenails.”

Everyone knew what Hogue was trying to do, in a disgusting appeal to race that might hang the jury. Prosecutor Dunikoski didn’t need any of that. She just had to mention that the McMichaels and Bryan were good people.

Just like the jurors. But that no one gets a free pass. The jurors wouldn’t get one. Don’t give one to the defendants. It worked.

It’s the workaround logic that gets justice in the Deep South. Racism? What’s that? We’re all just good people who can’t escape accountability, remember? That’s how you get an nearly all-white jury to convict three white guys for murder.

After the trial, the Rev. Al Sharpton talked about how this would be an historic trial. It will be, in no small part because Dunikoski was strategic and judicious in the use of race to get real racial justice. How do you beat an all-white jury? Dunikoski, the Arbery prosecutor showed us all the way.

Emil Guillermo is a journalist and commentator. See his live show, Emil Amok’s Takeout on Facebook and YouTube at 2p Pacific.