County leader appeals to Fil-Ams for support in bid for U.S. Congress

County leader appeals to Fil-Ams for support in bid for U.S. Congress 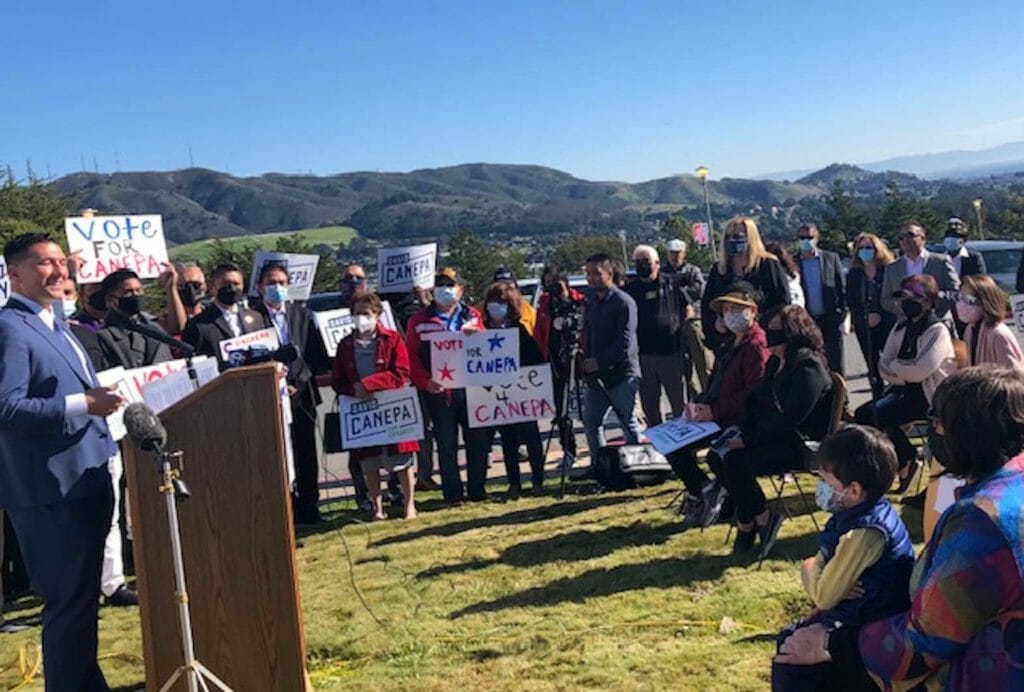 DALY CITY – San Mateo County Board of Supervisors President David Canepa officially announced his candidacy for the United States Congress with an appeal to the Filipino American community to join him in a campaign he said would be impossible without their support.

The one-time Mayor and two-term member of the City Council of Daly City was among the first elected officials to declare intention to try and succeed US Congress Member Jackie Speier.  A Democrat representing District 14 since 2008, Speier announced last week she would not seek reelection.

At press time Canepa is the lone aspirant for the post from the Board of Supervisors. 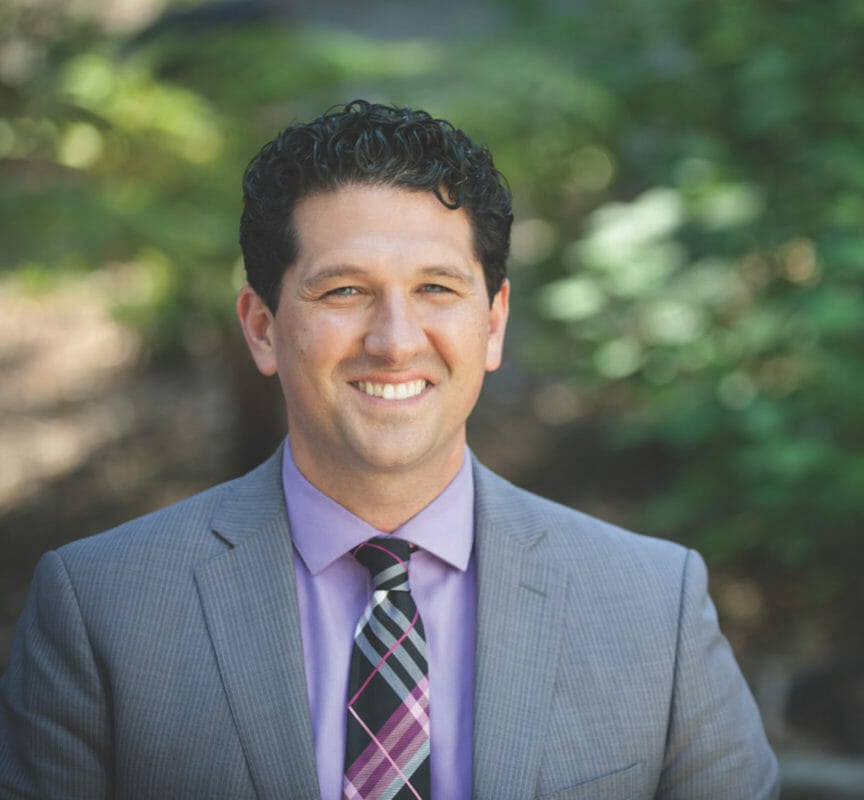 “We’re all in,” Canepa confirmed his decision to Inquirer.net days before making the official announcement Nov. 20 at Seton Medical Center.  “We decided after 9 hours of talks with apolitical consulting team on the East Coast (that the timing is ideal).”

By “we,” he was referring to himself and his wife Ana del Carmen Valenzuela, El Salvador Consul General in San Francisco, and mother of their son David Piero, 4.

“I talked to Ana and she told me to ‘just do it.’ When she gave me the green light, that was it.  Piero is used to it, he grew up with people around me, with all of it,” he pictured his rise in local politics as a family man and young father.

Canepa identified as a “multicultural son of San Mateo County.”  He shared his family origins with a great grandmother who immigrated from Sonora, Mexico, and settled in Los Angeles where his grandmother was born. His roots make him Italian, Mexican and Irish American, he said.

“I’m proud to be surrounded by people in this county who like me come from all around the world,” Canepa acknowledged the mixed crowd standing in the late morning sun, reserving special recognition for the city’s largest population of color.

“Without question, I must show great appreciation for our Filipino community, the largest outside of the Philippines:  Daly City is your home and always will be.”

“Daly City is 56% AAPI. The API community is the core of my constituency and if elected to Congress I will continue to fight for its core values. The values of affordable, high-quality and easy to access health care, higher education, a hate-free community and affordable housing.  Whether I’m in Washington DC or Daly City I will continue this fight,” he promised.

“AAPIs have supported me throughout my journey.  I have been working with Filipinos and AAPIs this whole time.  You don’t see others interacting with AAPIs the way I have,” he said.  “Filipino Americans and AAPIs are my ‘secret sauce.’  I’ll need them to come out and vote especially in this election.”

The candidate touted his achievements as president of the Board of Supervisors during the pandemic.  He cited the “$220 million in local, state and federal funding to protect our small businesses from closure, to provide rental assistance to keep our neighbors housed and fed our poor and hungry seniors more than 2.5 million freshly prepared meals.”

For the youth, he said the county pledged $2 million with additional $6 million from the state to the Community College district, giving “free tuition, free transportation, free food and intensive wraparound services to pave a path to seek higher education” for its Promise Scholars program benefiting 2,500 students.

Families will benefit from the $120 million to “construct and preserve thousands of affordable housing units” to alleviate the severe housing crisis.   The centerpiece of his 13-year service is affordable and accessible health care, he said, explaining his choice of his birthplace, Seton Hospital, which leaders agree would have shut down area had he not assiduously brokered agreements between the County, the state and the new Southern-California based owners.

“Public health and community-serving hospitals should be the nation’s No. 1 priority,” he proclaimed what will be his first order of the day if elected.

“David and I share a deep interest in and commitment to bettering our community. His dedication to increasing diversity, equity, and inclusion, building more affordable housing, expanding free and affordable secondary educational opportunities, and combatting the climate crisis has been evident throughout his career in public service,” hailed Daly City Mayor Juslyn Manalo, who led the rally chant for her candidate on Saturday.

“David is highly visible and very reachable.  I believe he’ll be a great representative for us in DC,” said Del Rosario.

Daly City Personnel Commissioner Perla Ibarrientos committed support for Canepa without knowing who else among her many politician friends may decide to enter the race.  She joined Manalo, Vice Mayor Rod Daus Magbual and Council Member Ray Buenaventura in brandishing signs for their bet.

“From the beginning, David has consistently kept his word to address Filipino American needs,” said Ibarrientos, a Daly City resident since 1970.  “He may be younger and new to county politics, but as he became an effective president of the Board of Supervisors in his first term, he will be a strong advocate for our region.” 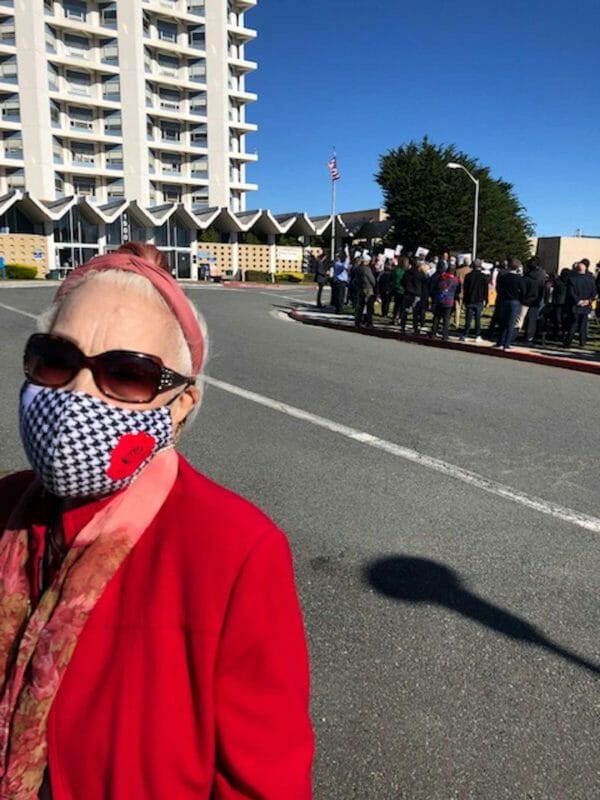 Ibarrientos recalled it was Canepa who proposed the annual Philippine flag-raising commemorating June 12 Independence Day in the City Hall of Daly City.  He continued the tradition in Redwood City when he was elected supervisor, introducing Philippine culture in the county capital of the county, Ibarrientos said.

Retired San Mateo County Commissioner and Colma resident Aurea Cruz reminded: “Don’t forget David brought affordable transportation program Got Wheels! to the area.   Before then we up in North County endured the cold and damp weather waiting in bustops to get to our doctor visits and other appointments.”

Speier’s term ends November 2023, giving her successor a year to raise about $4 million estimated cost to campaign for the seat. The road ahead excites Canepa, who said he will “fund-raise day in and out in San Mateo.”

“I broke the fund-raising effort in Daly City,” he revisited how in 2016 he trounced veteran opponents for the supervisor post, suggesting he can do the same beyond his bailiwick.