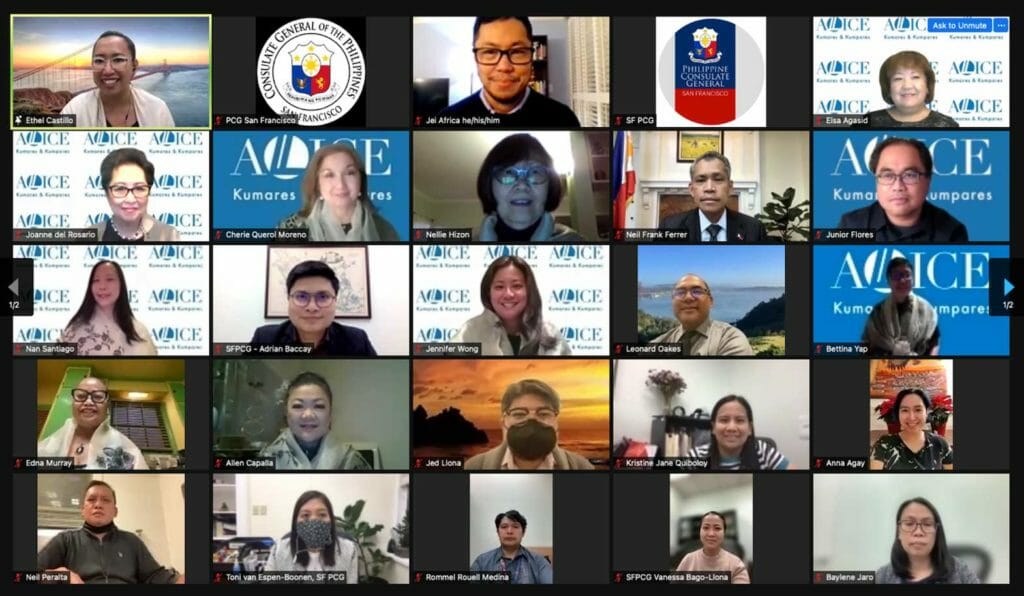 The training aims to raise the competency of Philippine foreign service personnel in the U.S. in dealing with domestic violence cases, in line with the Philippine Safe Spaces Act. CONTRIBUTED

SAN FRANCISCO – Consulate and other Philippine foreign service posts in the U.S. on Nov. 19 attended an online webinar-training on intimate partner violence to mark the annual observance of the 18-Day Campaign To End Violence Against Women.

The Alliance for Community Empowerment (ALLICE) the Philippine Consulate General in San Francisco hosted the training.

The entire personnel of the Consulate in San Francisco as well as representatives from the Philippine Embassy in Washington, D.C., and the Philippine Consulates General in Chicago, Los Angeles and New York took part in the online event.

“It is an unfortunate reality that many of those who experience physical, verbal, sexual or psychological abuse from their partners would rather keep silent about their ordeal or stay in an abusive relationship, for fear of further retribution from their partners or judgment from others. They often hold the mistaken belief that staying in such a toxic and unhealthy relationship would keep their families together,” Ferrer lamented.

In line with the Philippine Safe Spaces Act of 2019, Ferrer said that the training seeks to turn the Philippine embassy and consulates in the U.S. into “safe spaces for those who have found the courage to end their silence and unshackle themselves from intimate partner violence.”

Ferrer also thanked ALLICE for collaborating with the Consulate for the webinar, the first-ever training held for the Philippine embassy and consulates in the U.S.

“Following the mantra of the late Alice Peña Bulos, who said: ‘To achieve empowerment, we must reach out and empower the community,’ the Consulate will continue to support ALLICE’s noble mission of keeping Filipino and Filipino American homes free from domestic abuse and violence,” Ferrer said.

Dr. Jei Africa, ALLICE Clinical Director and Marin County’s Behavioral Health and Recovery Services (BHRS) director, discussed the many forms and nuances of intimate partner violence in the Filipino American setting. He also outlined ways to detect signs that a person is experiencing domestic violence, and the community resources that can help survivors.

ALLICE is a non-profit all-volunteer organization promoting healthier relationships, homes, and communities through education. ALLICE has long been a partner of the Consulate in community and women empowerment in the Bay Area through activities such as the annual “Free from Violence” Seminar and Resource Fair, and public forums on IPV.

Those who are experiencing abuse or violence from their partners may avail themselves of the following resources: