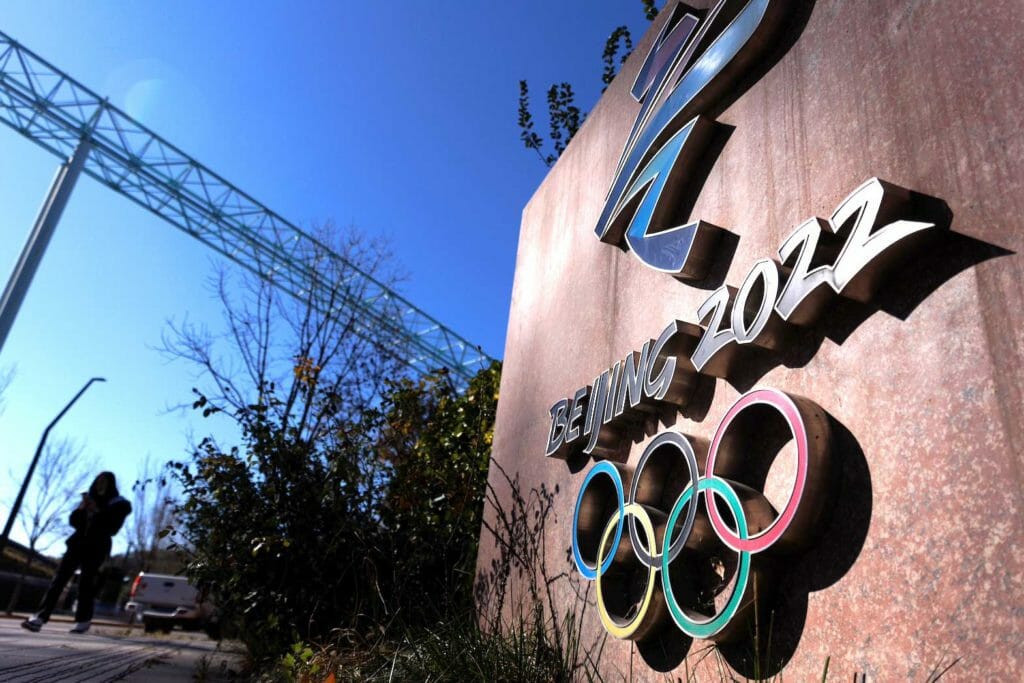 A woman walks past the Beijing 2022 logo that is seen outside the headquarters of the Beijing Organising Committee for the 2022 Olympic and Paralympic Winter Games in Shougang Park, the site of a former steel mill, in Beijing, China, November 10, 2021. REUTERS/Thomas Peter

WASHINGTON -The United States is considering a diplomatic boycott of the Beijing Olympics, President Joe Biden confirmed on Thursday, a move that would be aimed at protesting China’s human rights record, including what Washington says is genocide against minority Muslims.

“Something we’re considering,” Biden said when asked if a diplomatic boycott was under consideration as he sat down for a meeting with Canadian Prime Minister Justin Trudeau.

A diplomatic boycott would mean that U.S. officials would not attend the opening of the Beijing Winter Olympics in February.

A U.S. decision not to send diplomats would be a rebuke of Chinese President Xi Jinping just days after Xi and Biden worked to ease tensions in a virtual summit, their first extensive talks since Biden took office in January.

Activists and members of Congress from both parties have been pressing the Biden administration to diplomatically boycott the event given that the U.S. government accuses China of carrying out a genocide against Muslim ethnic groups in its western Xinjiang region, something that Beijing denies.

White House spokesperson Jen Psaki told a regular briefing on Thursday that U.S. consideration of a diplomatic boycott of the Winter Olympics was driven by concerns about human rights practices in Xinjiang province.

“There are areas that we do have concerns: human rights abuses,” Psaki told reporters. “We have serious concerns.”

“Certainly there are a range of factors as we look at what our presence would be,” she said, while declining to provide a timeline for a decision.

“I want to leave the president the space to make decisions,” she said.

Sources with knowledge of the administration’s thinking have told Reuters there was a growing consensus within the White House that it should keep U.S. officials away from the Games.

Last week, U.S. Secretary of State Antony Blinken said Washington was talking to countries around the world about “how they’re thinking about participation,” but left a deadline for a decision unclear.

A bipartisan group of U.S. senators in October proposed an amendment to an annual defense policy bill that would prohibit the U.S. State Department from spending federal funds to “support or facilitate” the attendance of U.S. government employees at the Games.

Some Republican lawmakers have been calling for a complete boycott of the Olympics.

Senator Tom Cotton of Arkansas told a news conference on Thursday that a diplomatic boycott of what he called the “genocide Olympics” would be “too little, too late” and said no U.S. athletes, officials, or U.S. corporate sponsors should take part.

Nikki Haley, a Republican former U.S. ambassador to the United Nations, also had called for a complete boycott, saying attending would send a message that America was willing to turn a blind eye to genocide.