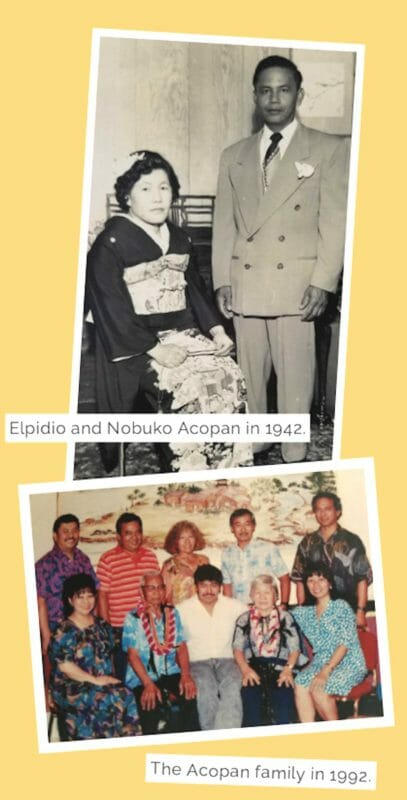 When Rosie Ramiro, the seventh child of a Filipino pioneer in Manoa, Hawaii, started sharing her family’s legacy on Facebook, the idea for celebrating “Filipinos in Manoa” at the Manoa Heritage Center was born.

The Acopans and the center’s Executive Director Jessica Welch wanted the larger community to learn about the family’s history.

Elpidio Acopan, Rosie’s father, is known as the first independent Filipino farmer in the Manoa Valley in Oahu. In 1930 he bought a lease for more than 25 acres from a retired Japanese farmer to grow ti plants, gardenias, banana and other crops. His eight children helped him and his wife, Nobuko Acopan, with the farm work for 63 years. He died in 1993, Nabuko in 2003. Elpidio Acopan immigrated from Ilocos Norte in 1926 to work as a sakada on a plantation, among 120, 000 first-generation Filipinos who arrived in Hawaii between 1906 and 1934. In 1929, he moved to Oahu to work for the Japanese farmer in Manoa Valley, making $1.50 a day, before buying a lease on the land.

The heritage center dedicated a garden to the Acopan family three months ago, with some of the same plants that Elpidio and Nobuko grew. On Nov. 14, the center held a commemorative event attended by numerous Acopan relatives as well as community members.

“Although my dad wasn’t educated, he had a lot of experiences and he taught us about what he experienced growing up,” Elpidio’s son Lawrence Acopan told the Star Advertiser. “A lot of people looked down on us before because we’re Filipino. It was kind of hard. (But ) it’s great to see that they finally recognize my dad.”

Along with the Heritage Center, the celebration was hosted by Alexander & Baldwin, the Filipino-American Historical Society of Hawaii, the Hawaii Council for the Humanities, Punahou School, the University of Hawaii and Roosevelt High School.

Clement Bautista, Filipino-American Historical Society of Hawaii president, said the event was a good start for the community to begin learning about this important part of island history.