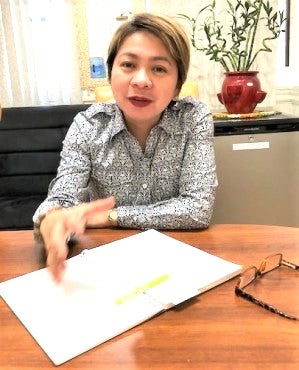 The rise in Boomers seeking health care and the aging of the nursing ranks are routinely believed to be contributing to a projected demand of more than 1 million nurses by 2024.

But recently, the trend toward digitalization appears to be pushing nurses into retirement making the shortage even more urgent — a “tsunami of retirement” as noted by the American Nurses Association.

Is it worth it?

Some registered nurses ask themselves this question as they ponder a decision toward early retirement rather than having to undergo retraining and other educational updates to keep their practice current.

These are RNs who are earning more than $100K/year and whose wealth of experience may lead them to switch to jobs that are less demanding, such as working in clinics or private nursing. There is little motivation for them to upgrade their skills.

In New York State, the union-mandated retirement age for nurses is 65 years old. However, the industry is seeing an increase in early retirement at age 60 and with 20 years of experience.

Computerization, may be transforming health care by making it more efficient to track patient data, but it is also pitting veteran nurses against younger ones. Since the adoption of the Electronic Medical Records (EMR) in early 2000 — a digital version of a patient’s health data — Boomer nurses, who are used to taking patient charts on paper, are being trained on the use of the EMR software. More than the apprehension of learning new technology, some veteran nurses have developed a different kind of fear.

“It’s the fear of making mistakes or the fear of clicking in the wrong place with the electronic medical records (EMR),” said Sally Nunez, CEO of RN Express Staffing Registry (RNE). 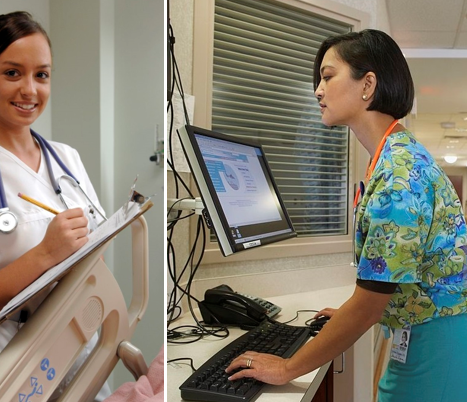 Chart vs. computer: The generational divide is on.

Admittedly, she said computer-inexperienced nurses take more time getting adjusted to computerization. Enter the quick-learning millennial nurses who take to computers almost effortlessly. What is quickly emerging in some hospitals and nursing facilities, Nunez, added, are veteran nurses leaving the work force early and younger nurses, with little clinical experience, taking over their duties. RNs feel the time spent on computer training takes too much attention away from patient care.

Children do the tech

“These are nurses who may be on Facebook but it was their children who created their profiles,” noted Nunez, an RN with 25 years of experience, left active practical nursing service and committed herself to nursing training and education. She was an Admissions and Case Management nurse at Amsterdam Nursing Home when she left the practice. “When they’re asked about computers, they’ll say, let me ask my daughter.”

“There’s too much to do, with less time,” noted RN Ma. Lea Batomalaque, who recently stepped down as Post-Anesthesia Care nurse at a hospital in Manhattan. She is currently the Vice President for Marketing at RNE, which she co-founded with Nunez and RN Florida Lucas in 2010. “There’s a lot of educational updates to keep the practice current, with exams to it. With all the workload, who has time for that?”

It becomes “overwhelming” for the nurses, echoed Nunez and Batomalaque. 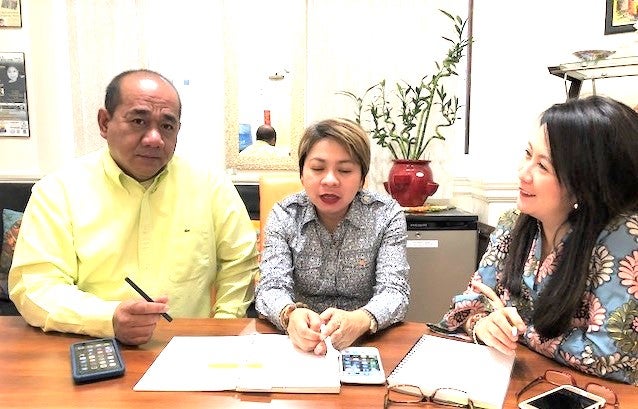 “It’s a struggle,” added Alex Alejandrino, administrator for RN Express. “Many longtime nurses would rather retire than be promoted.”

It’s an experience seen across the board, and not only among Filipino nurses, they said.

RN Express is seeing this unprecedented increase in demand from hospitals and nursing facilities.

“The demand is so big. We’re getting calls, we need 10 Filipino nurses, we need three nurses, etc.” said Nunez. “For some reason they prefer Filipinos.”

Filipino nurses are valued because they are hardworking, not easily drained and exhausted on work, tolerant, soft and caring toward their patients.

“It’s also our work ethics,” explained Nunez. “Filipino nurses do not leave until they finish their work, and they accept that there is so much work to do.”

With the pace of recruitment almost steady, RN Express is proud to report 16 new hires. These are nurses who came not only from the Philippines but also from Canada, the Middle East, and the Bahamas, their employment-based visas approved in record time.

“We try to do the best we can and help with the shortage,” said Nunez.

LATEST
Del Taco to be bought by Jack in the Box in $575 million deal
How to be a virtual influencer
Top skills for today’s job market
Toyota announces it’s building a $1.3 billion battery plant in North Carolina
US employment slows despite moderate November job gains
White House asks gov’t to buy more from small disadvantaged businesses