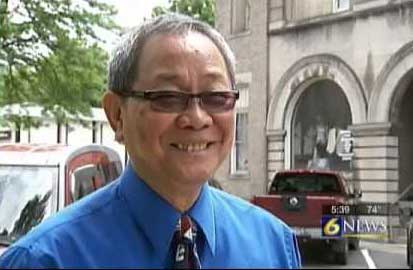 WPVI-TV in Philadelphia interviewed Ridgway Mayor Dr. Guillermo Udarte in 2014 where he invited visitors to Ridgway which, he said, was “just like my hometown in the Philippines.” SCREENSHOT

Dr. Guillermo Udarbe, who was mayor of Ridgway, Pennsylvania for 12 years, died unexpectedly on November 11, according to an obituary announcement. He was 81.

When Udarbe became mayor in 2009, Ridgway had a population of 4,600, where 98 percent were Caucasians and 2 percent were Asians. There were two more Filipino families in addition to the Udarbes.

He was re-elected twice and was also a much-loved family physician in town who continued seeing patients at the local hospital.

Udarbe was born February 10, 1940, in Dugo Camalaniugan in Cagayan province, the son of the late Dominador Urias and Luz (Genobebe) Udarbe. He married Gloria Aragones on December 23, 1967.

Interviewed by The FilAm in 2012, Udarbe shared that he and his wife Gloria were the first Filipino residents of Ridgway.

“We had a hard time at first,” he said then. “We received phone calls telling us to go away. They even called us niggers.”

But the couple persisted and raised two daughters, Cherry and Charina, while Gloria worked as a nurse and Udarbe ran his private practice. He served his residency at Northeastern Hospital in Philadelphia and Temple University. He had been a family practice physician for 52 years, first in Ridgway and later at UPMC Kane Community Hospital.

“I came here because Ridgway is just like my little hometown in Camalaniugan,” he said wistfully.

But by 2009, the town had lost nearly half of its residents – from about 9,000 down to 4,600 — when factories that made automotive brake linings and ball bearings closed at the height of the recession.  People moved to nearby cities in search of jobs.

“Nagsi-alisan sila. Bumaba ang census namin (They were leaving. Our census count went down),” he said, speaking in Tagalog.

Seeing that Ridgway was getting to be a “ghost town,” he decided to run for mayor in 2009, in a five-way race. He won by 65 percent as the Democratic candidate in a Republican-leaning community.

“It’s all because of my relationship with the people. I’m a friendly guy,” he said. He was re-elected two times.

Udarbe continued to see patients as a doctor of the Kane Community Hospital and the Elk County Regional System. By end of business, he would put on his mayor hat and meet the town council. Most council meetings were at night. “I am a full-time mayor,” he said.

As mayor, he enjoyed leading the annual Firemen’s Parade and planted trees in downtown Ridgway to beautify the town.