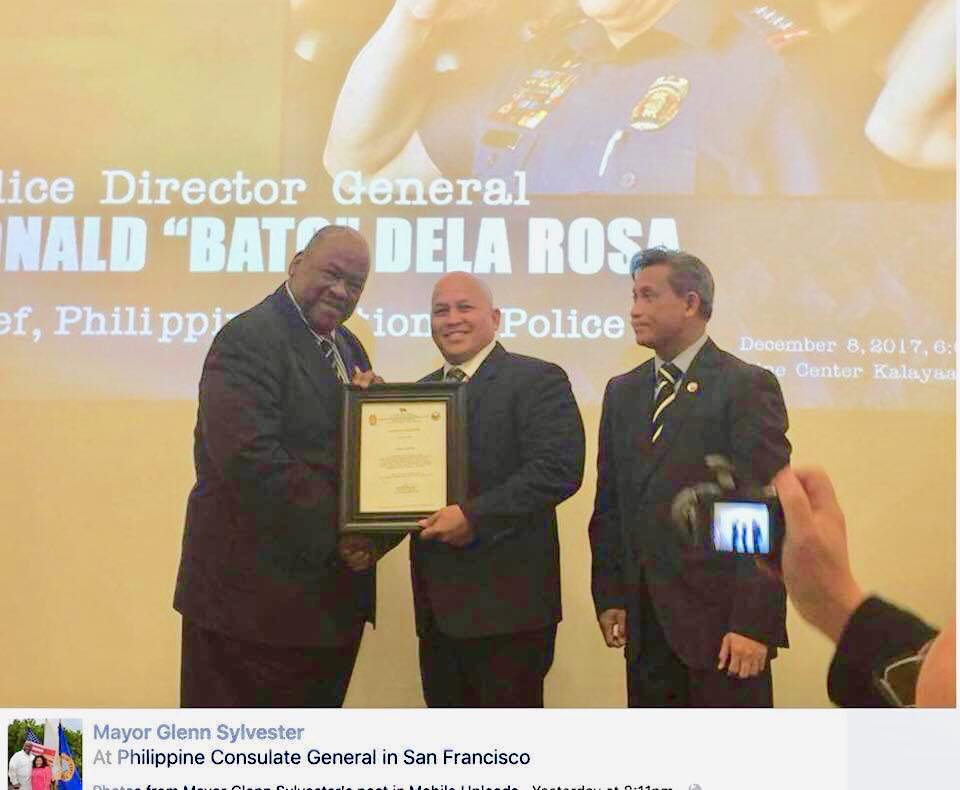 In a meet-and-greet event at the Philippine Consulate in San Francisco last week, then Daly City Mayor Glenn Sylvester had a picture taken with PNP Chief General Ronaldo de la Rosa holding a plaque that was seen by netizens as a token of appreciation given to the visitor. FACEBOOK

DALY CITY — The erstwhile mayor of this Bay Area City with a large Filipino population denied endorsing alleged human rights violations in the Philippines after a photo posted in many social media outlets showed him appearing to give a plaque of appreciation to with the visiting Philippine National Police (PNP) chief as the San Francisco Philippine Consul-General stood by.

“I have no comment at this time,” reluctantly replied Sylvester when asked to comment on calls from U.S.-based human rights activist Filipinos for Sylvester to apologize and condemn the widespread killings in the Philippines.

“But I posted some pictures (in my Facebook account) with the PNP Chief and I holding a plaque in the company of Consul-General Henry Bensurto Jr. What was purported to be me giving an award or plaque of appreciation to General de la Rosa was the opposite. Rather the picture depicted an award he gave to me and members of the Filipino American Law Enforcement Officers Association (FALEO), a Filipino group I used to head. It was an award General de la Rosa had given to us,” clarified Sylvester.

Sylvester insisted that “it is not my place to endorse the alleged extrajudicial killings (EJK) and supposed human rights violations in the Philippines. Here in the United States we believe in due process and it (the picture) was not an endorsement.“ 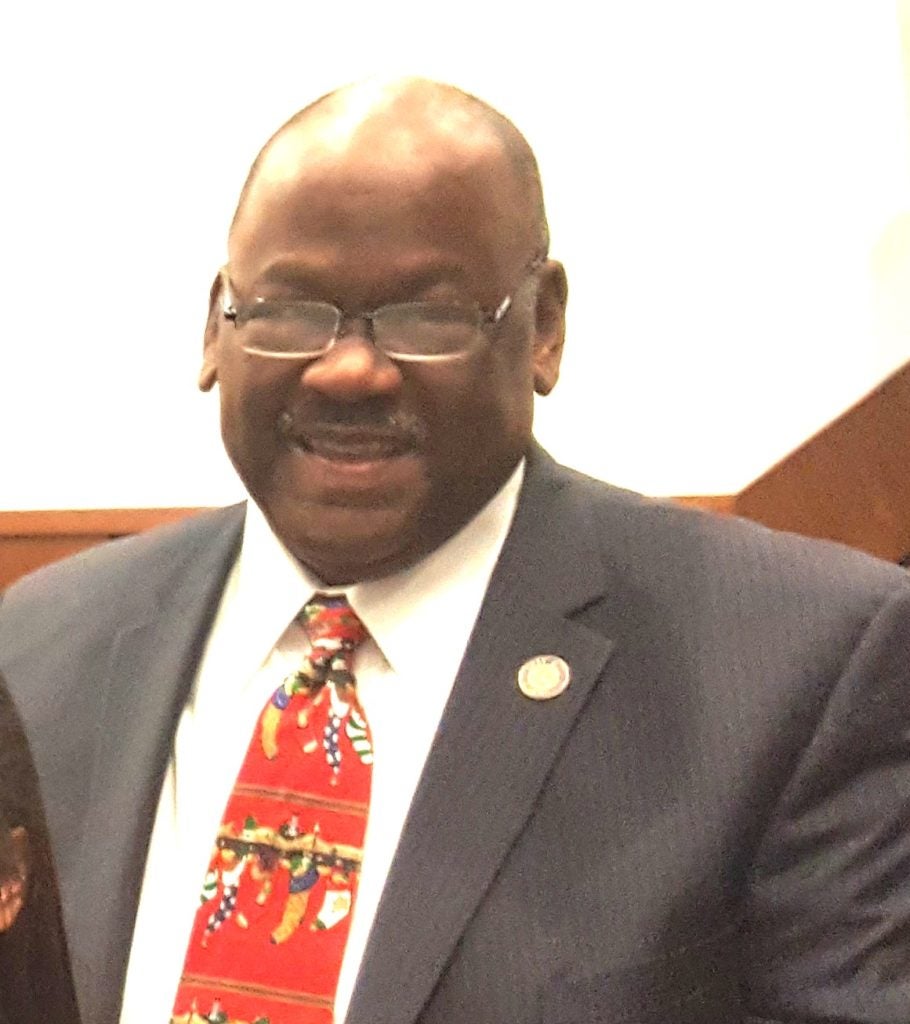 Daly City Council Member Glenn Sylvester, a Fi-Am, clarifies that the plaque shown in a picture at the Philippine Consulate meet-and-greet was an award for the Filipino American Law Enforcement Officers Association (FALEO) given by the PNP and not an award for the PNP Chief. INQUIRER/Jun Nucum

Earlier, the Filipino American Human Rights Alliance (FAHRA) had issued a condemnation statement demanding an apology from Sylvester for allegedly blessing “the policy of extrajudicial killings that has cost the 15,000 lives lost when Philippine President Rodrigo Duterte launched his so-called anti-drug campaign.”

The statement also cited that “U.S. House Rep. Jackie Speier, whose district includes Daly City (which has more at least 30% Filipino population) publicly condemned the spate of killings in the Philippines during public hearing of the Tom Lantos Commission of Human Rights in the US Congress and that the San Francisco Police Department (to which Sylvester had belonged as a police officer) has stopped the training of PNP police due to issues of human rights violations perpetrated by police forces under the direct command of General de la Rosa.” 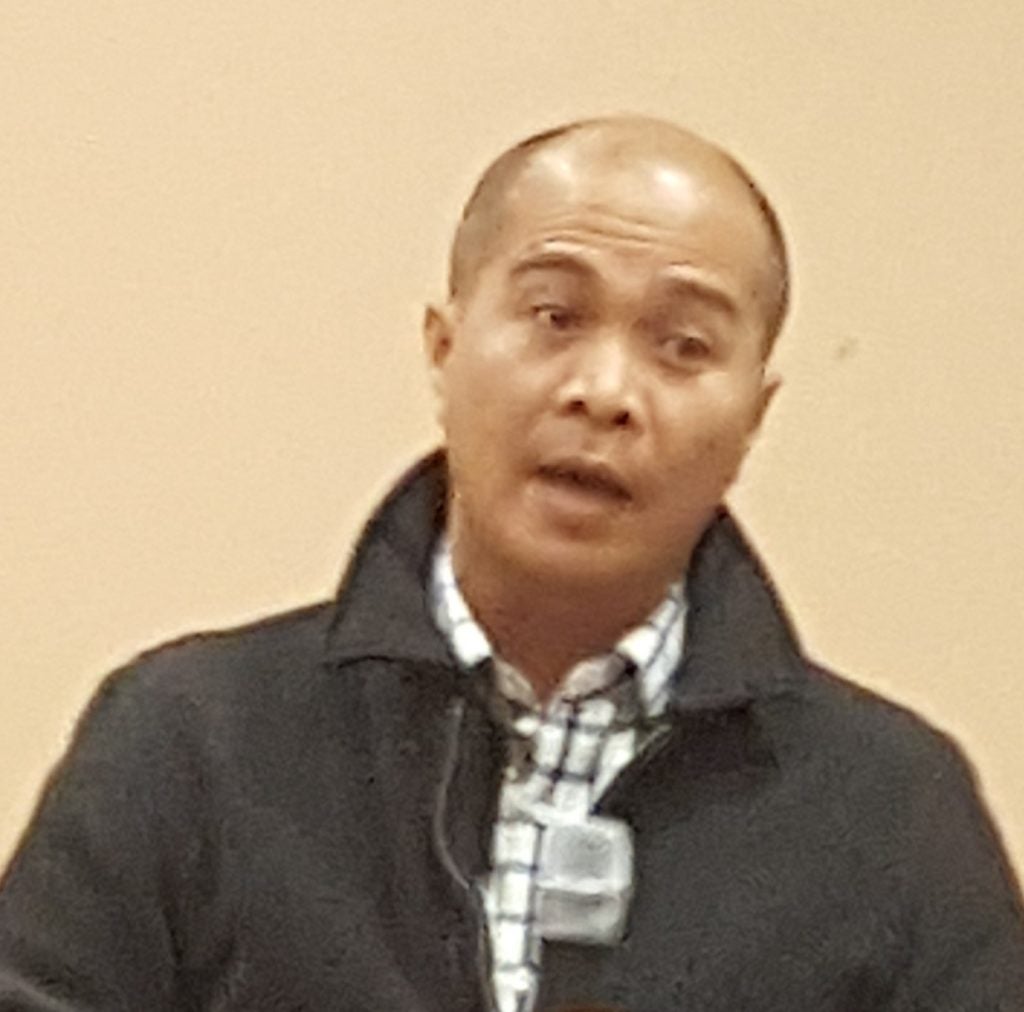 Filipino American Human Rights Alliance (FAHRA) leader Ago Pedalizo is confident that both Filipinos and Americans in the U.S. are against extrajudicial killings. INQUIRER/Jun Nucum

In an interview, FAHRA officer Ago Pedalizo believes that since Sylvester is an elected Daly City council member, “by perception he still represents the values of the city, thus, he needs full accountability. There is need for FAHRA to reach out to the office for clarification because the burden is on his (Sylvester) office to explain.”

“He did not only cozy up with a hitman of a dictator. He awarded him a plaque and praised him in public! What message does it bring to the world? Hey, keep killing people and you will be rewarded,” Pedalizo observed.

Pedalizo also claims that in going around the cities of San Francisco, Daly City, Colma City, South San Francisco, Los Angeles and Huntington Beach, among others, to collect petitions against EJK, both Filipinos and Americans aired their overwhelming opposition to the killings.