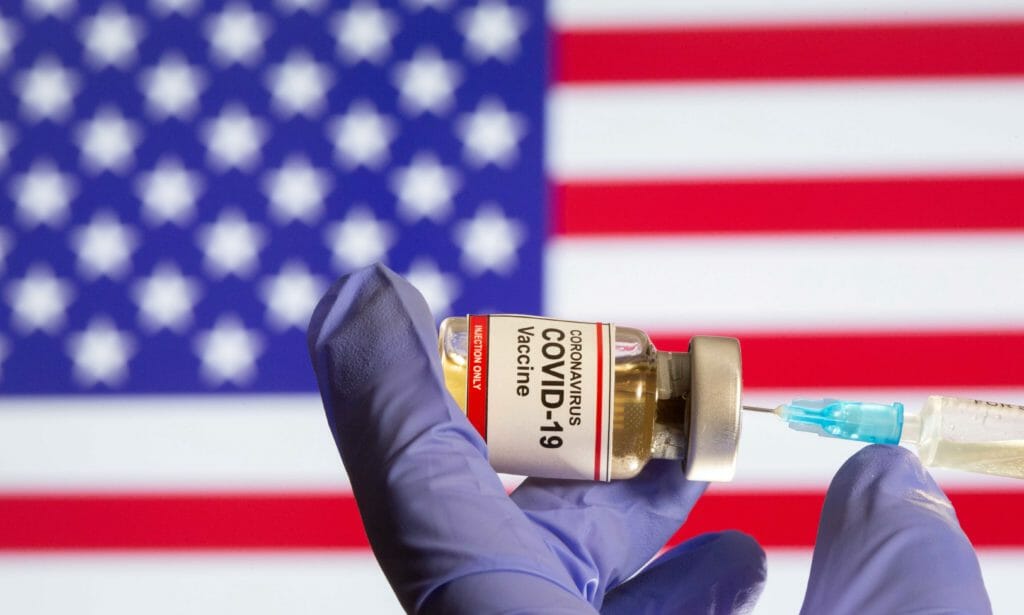 A woman holds a small bottle labeled with a “Coronavirus COVID-19 Vaccine” sticker and a medical syringe in front of displayed USA flag in this illustration taken, October 30, 2020. REUTERS/Dado Ruvic

President Joe Biden has said the country’s patience is growing thin with the 30% of Americans who are not fully vaccinated, and the rule is aimed at ensuring safe workplaces.

The vaccine requirement is being imposed through a rarely used process that has a history of being blocked by judges.

Here is a look at the rule and how it might be challenged.

WHAT IS THE RULE?

Imposed by the Occupational Safety and Health Administration (OSHA), the rule requires all businesses with at least 100 employees to ensure they are vaccinated or submit to weekly testing and wearing a face covering.

OSHA rules typically take seven years to develop. This rule is being issued through an emergency temporary standard (ETS), a process that allows OSHA to address a “grave danger” and is aimed at protecting against that hazard.

Prior to an ETS issued in June that applied to healthcare settings, OSHA had issued nine emergency temporary standards since it was set up in 1971. Of those, six were challenged in court and only one survived unscathed: a standard issued in 1978 aimed at exposure to acrylonitrile, a chemical used in rubber manufacturing.

WHO OPPOSES THE RULE AND WHY?

A group of 24 Republican attorneys general warned in September that they would go to court to fight what they said was an illegal mandate.

They argued OSHA’s power to issue an emergency rule was limited to workplace hazards such as industrial chemicals, not a widely circulating virus. They also accused the Biden administration of usurping the power to regulate healthcare which has traditionally been left to states.

Industry, religious and civil liberty groups have also said they plan to sue because they expect the rule to be a burden on businesses or amount to an unconstitutional power grab.

WHAT CAN OPPONENTS CHALLENGE?

The most likely avenue of attack will focus on the argument that there is a grave danger.

Opponents note that COVID-19 cases are declining from a recent wave in September and the country is getting closer to herd immunity.

The National Retail Federation wrote to the Biden administration in October questioning whether OSHA should be issuing a rule to address a disease that is a greater danger outside the workplace than in.

Courts have said OSHA must show there are no other means of addressing the grave danger. Trade groups have said mitigation efforts in low-risk industries such as construction have reduced the threat from the pandemic.

The ETS issued in June by OSHA that applied to healthcare settings could also be used against the agency. OSHA said then that it did not need a broader rule to apply across the economy.

WHAT HAVE COURTS SAID IN THE PAST ABOUT ETS?

The 6th U.S. Circuit Court of Appeals upheld the 1978 standard on acrylonitrile because a study showed exposure to the chemical led to higher cancer rates among South Carolina workers, according to a report by the Fisher Phillips law firm.

Other emergency standards were struck down when OSHA failed to show a link to cancer from a targeted chemical or that the alleged hazard caused no more than headaches and fatigue, which a court found fell short of the grave danger threshold.

WILL THE RULE CONFLICT WITH STATE LAWS?

OSHA regulates workplaces in 29 states while the rest have their own state-run version of the agency. There is some doubt whether all the state-run agencies will implement the rule.

State-run OSHA agencies in Utah, Arizona and South Carolina were warned by Biden administration last month for failing to adopt the similar emergency rule unveiled by OSHA in June that applied to healthcare settings.