Why Marcos lifted Martial Law in 1981

Why Marcos lifted Martial Law in 1981 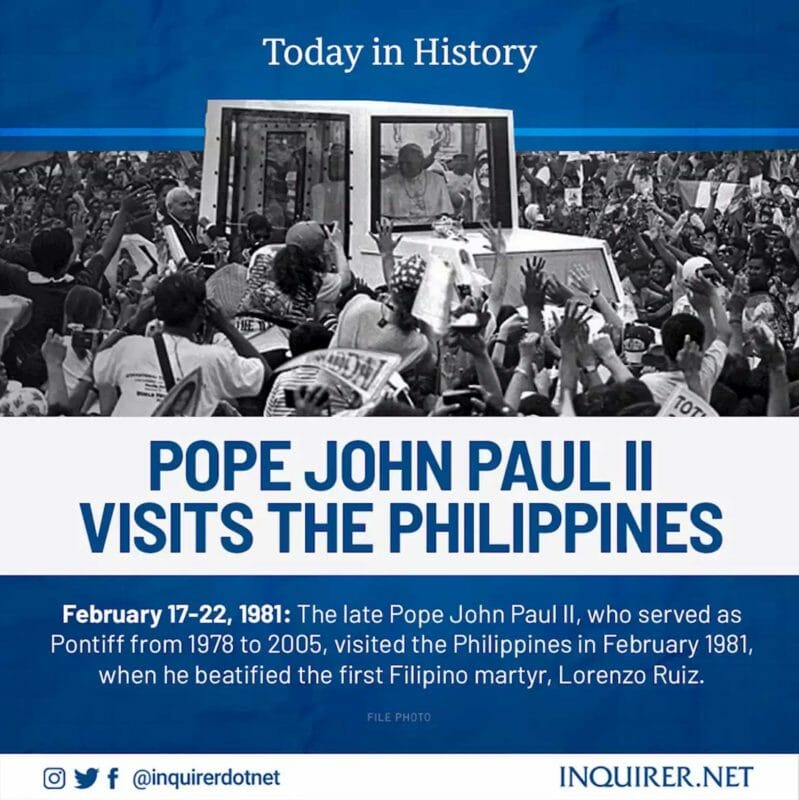 He learned to acknowledge his wrongdoings. He recognized his mistakes that, for one, his iron-hand, heartless, and brutal approach to Philippine problems was uncalled for. He had a change of heart and, accordingly, he lifted Martial Law on January 17, 1981 via Proclamation No. 2045. Dearie me, no, no, nothing of that sort. Don’t be fooled. Neither was it a presidential effort to calm the opposition growing within the ranks of the Catholic leadership. No, no, nothing quite near it.

Just before the 1981 papal visit, sensing the global impact of such a visit to the Philippines, the First Couple bent a little, retreated a bit, and did something publicly approvable. In other words, they compromised to look less terrible. They were masters of compromise and experts of manipulation strategy, apparently born with one tenacious goal, that of self-preservation.

The theory-on-paper lifting of Martial Law was all a show, merely a skin-deep cosmetic, perfectly timed for St. John Paul II’s first pastoral visit to our maltreated nation, bayang kahapis-hapis. The conjugal dictators appeared to have learned a lot from the first papal visit, that of Pope Paul VI in 1970, since they had become more astute to employ PR and publicity stunts for the second papal visit.

Fr. Zacarias Agatep (1936-1982) was the parish priest of Our Lady of Hope Parish in Caoayan, Ilocos Sur. He organized the basic ecclesial communities (BEC) and cooperatives for evangelization and social justice, and taught farmers about land reform. “If it is a crime to love the poor and support them in their struggle against injustice, then I am ready to face the firing squad,” Fr. Agatep wrote in 1980 as if experiencing a dark premonition that his life would end soon.

He was arrested and jailed for supposed “subversion or rebellion.” President Marcos released him in 1981, obviously as a part of the dictator’s publicity stunts in preparation for the Polish Pope’s pastoral visit that year. Fr. Agatep’s freedom was the Greeks-bearing gift and the principal bearer was Marcos himself. Once out of prison, Fr. Agatep did not cease from publicly speaking about the Martial Law abuses. He did this to show his rejection of the dictator’s gift. On the heels of that historic papal visit, three assassins’ bullets took his life in 1982.

In 1981, Bong Bong Marcos Jr, 24, was Vice Governor of Ilocos Norte and, in 1983, the Governor of the province. The young politician was learning from his father and mother the great art of manipulation. In 1981, the principal purpose of the papal visit was for the Holy Father to preside over the BEATIFICATION of Lorenzo Ruiz, the Filipino proto-martyr, at the Rizal Park in Manila. On the other hand, Malacañan’s preoccupation with this historic event was geared towards grand maquillages and BEAUTIFICATION.

Gifted with histrionic talents, Imelda Marcos commissioned the 24/7 construction of the elegant Coconut Palace inside the Cultural Center of the Philippines complex, which she said she intended to be the guesthouse for the Pope and his entourage. The native-inspired mansion was built from the shells of 50,000 coconut and palm tree by-products. The Holy Father learned that it was ostensibly constructed at the cost of $5 million or 38 million pesos at a time when the majority of the Filipino citizens lived in poverty. And, using the most diplomatic-sounding message, the Bishop of Rome refused to set foot on the mansion.

Aware of the real score, His Holiness sincerely thanked her for her kindness but refused to stay in Imelda’s “papal guesthouse.” Instead, he told the first lady that affluence and display of wealth in the midst of dehumanizing poverty is un-Christian, well, words to that effect. In Malacañan by the Pasig River, he also admonished President Marcos to respect human rights, for no one can ever justify any violation of the fundamental dignity of the human person.”

Marcos showed diplomacy and utmost courtesy in the presence of His Holiness. But once the pontifical guest was gone, the strongman went back to the business of kleptocracy and militarization.

Will Bong Bong Marcos Jr. be a different president? But the apple doesn’t fall far from the tree, we often hear.

Jose Mario Bautista Maximiano ([email protected]) is the author of THE SIGNS OF THE TIMES and the Social Doctrine of the Church: An Epistemology(Salesiana, 1991) and THE CHURCH CAN HANDLE THE TRUTH (Claretian, 2017).