A Fil-Am Expedition to Manila and Davao

A Fil-Am Expedition to Manila and Davao 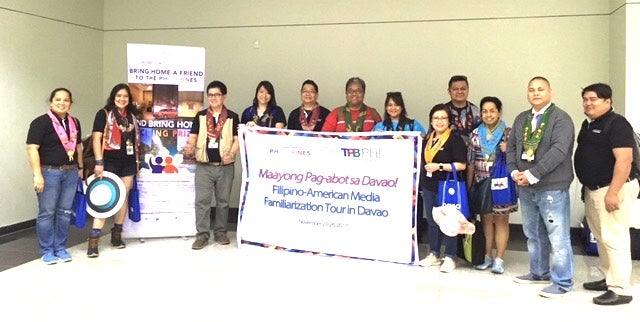 NEW YORK — After many years of living in the United States, hearing Filipino announcement on board an airline is indeed a welcome treat, paired with heart-warming smiles native to the Philippines. Christmas songs playing in the background instantly calmed our nerves as we wrapped up business to get into a vacation mode. Holidays bring back joy of childhood memories spent with our family and old friends. No wonder, Filipino Americans rush to Manila this season of the year.

For the first time, Filipino American media were invited by the Philippine Consulate General of New York (PCGNY) and the Department of Tourism New York (DOTNY) to what is intended as a homecoming tour of Manila and Davao to get a first-hand glimpse of the President Rodrigo Duterte’s hometown. A friendly interaction with Muslim indigenous people (IPs), a rare encounter with the world’s largest eagle and snorkeling around giant clams highlighted the trip.

The idea of inviting Fil-Am media was originally hatched by PCGNY Consul General Theresa Dizon De Vega and DOTNY Director Susan Del Mundo, in coordination with the Tourism Promotions Board, to introduce Davao as a new destination less traveled by Filipino Americans. The city government of Davao gave a warm welcome.

Given a day trip, we had the opportunity to revisit the oldest walled city of  Intramuros, home to the 18th century San Agustin Church, a UNESCO World Heritage Site for Baroque Churches, and the historic Fort Santiago, where national hero Jose Rizal stayed prior to his execution. 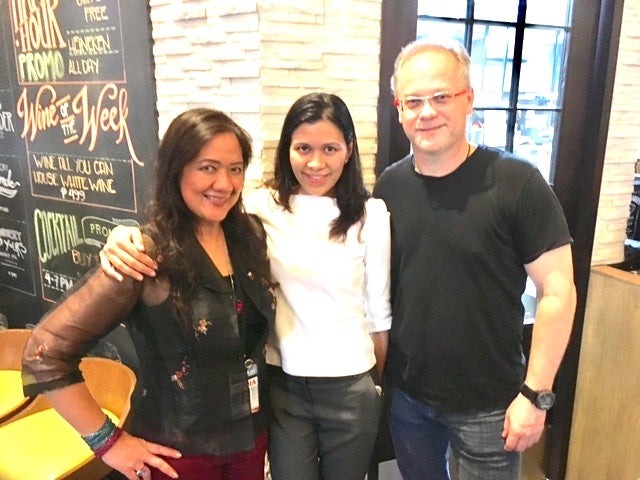 A Thanksgiving feast was hosted by spouses Cristina (middle) and Kevin Carl, in photo with the author. The Grind Bistro serves only USA approved beef steaks and burgers. INQUIRER/Carol Tanjutco

The opulence of the prewar structures now surrounded by museums are reminiscent of how our Spanish colonizers lived. Wealthy families like Don Antonio De Ayala (died 1876) secured their holy burial tomb inside San Agustin Church.

The nearby Fort Santiago is a must-see for this modern millennial generation, it’s like walking back in time to witness the dungeon cells used by Spaniards to drown their prisoners of war as the bordering Pasig River rose to fill the submerged cells. Our national hero, Dr. Jose Rizal was once held in one of the quarters above the ground during the last few hours of his life before he was sent to a firing squad.

The dungeons used to be storage vaults and powder magazine but due to the dampness and proximity to Pasig River, the Spaniards built a new magazine powder on top of the Baluarte in 1715, and used the dungeons as prison cells where prisoners were packed into the dark until the overflowing river drowned them, thus making their gruesome execution by fault of nature.

So much has changed in the bustling city but the century old traditions remain. Manila Cathedral still hosts high society weddings. As the day quickly fell, we were whisked to a two-hour drive to dine at the modern entertainment center at Global City, nestled between the affluent Makati City and Taguig, both of these cities claim jurisdiction over the booming business center. 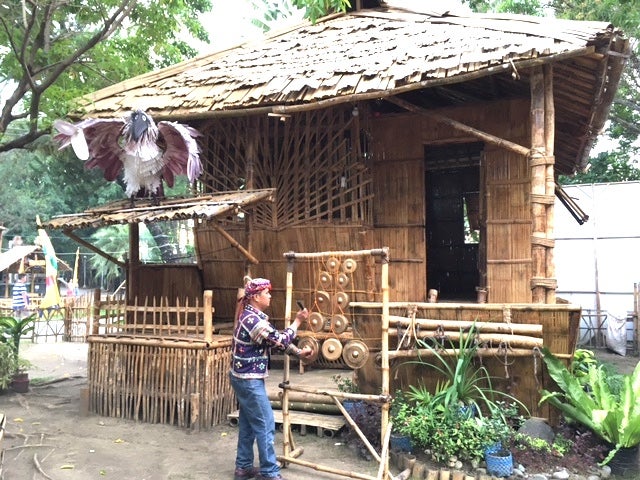 Tribal houses from the 11 Lumad tribes, the indigenous people of Mindanao, are showcased in the city park. INQUIRER/Carol Tanjutco

“We came back to the Philippines to be closer to my family and to fulfill our dream of opening our own business,” Cristina said. Her recipe for success is evident with the two-year-old Grind Bistro already having three locations in Manila. Great memories come with a great time, and even greater food.

Next morning, we were off to a two-hour flight to Davao City, hometown of President Rodrigo Duterte.  A top choice for business class hotel is Sedo Abreeza, just across the Ayala Mall. A meeting with local city government officials, businessmen and Tourism Board, highlighted by cultural entertainment kicked off our first educational briefing of Davao.

In her welcome statement, Mayor Sarah Duterte said, “I am positive that our Filipino team and the American team would need stronger ties of amity. Your country and ours have frequently been in bilateral exchanges towards tremendous progress amid profound challenges. Consider your first visit as a bonding in this lasting partnership as we give you a sweet welcome to our humble home. Though our two nations share a lot of differences in our cultures, in our social, economic status, we are bound by shared democratic and humanitarian beliefs. By working together, we build a solid team.”

After further briefing by local officials, it is refreshing to know that this city has had a sustainable, thriving economy for the past 10 years, and operates a very efficient central 911 free ambulance service to residents. Surprisingly, we learned Davao City is 80% Catholic, 15% Islam and 5% Lumads, the indigenous people. The President was raised both as Catholic, with Muslim family members. No wonder he is well-loved by all the constituents.

Our first day of expedition started at Hijos Plantation, Tagum, approximately 15 miles out of the city. We received a firsthand training of how to use a bow with an arrow ala “Hunger Games” and gave our best shots at target shooting with rifles. Driving around the plantation in an extended golf cart is reminiscent of the movie, “Jurassic Park,” minus the dinosaurs, but with wild boars running side by side your car, and monkeys freely crossing the rough road. 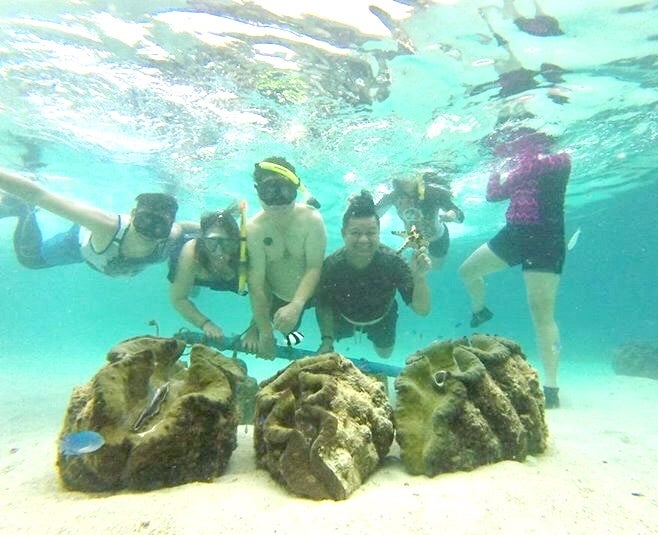 Giant clams open and closes with spectators around. They are visible by snorkeling a few feet below the reefs of Samal Island. DON TAGALA

There is a rope hanging bridge where one can get a bird’s eye view of the plantation, or guests can opt for a boat ride around a private lake to view the mangroves and some tribes raising vegetables for the plantation restaurant’s certified Halal menu. We were treated to a feast of seafood and beef broth, prepared in Halal tradition using farm grown coconuts and vegetables.

Davao is noted for banana exports, so we headed to a Cavendish processing plant to witness a manually operated hydraulic pull to move hundreds of banana bunches two kilometers from the plantation to the final stages of packaging (http://www.youtube.com/watch?v=qaMfs9NRdRw). The company employs manual laborers to clean the bananas, trimming off the below-grade quality which are then processed and sold as banana chips. The select banana bunches are manually blister-packed and boxed ready for shipment abroad.

After a long fun day, we had a quick tour of the various tribes and indigenous people. The city created a park showcasing actual tribal houses, where visitors can listen to pipe and gong music while buying samples of their wares and colorful fabrics. It is a wonderful project that gives opportunity for Lumads to showcase their fashion and culture in an exhibition set up. Vendors of genuine freshwater and South Sea pearls are all over the place.

Next morning, we left the city and headed out for island-hopping. Two hours later, a locally modified double decker boat named Wind Clipper, awaited our small group of 11 persons. Private chef Ron was cooking up something special for the next couple of hours that we would spend on board. A roasted wild boar “lechon” was the king of his banquet table. Fresh seaweed salad was the perfect complement to giant squid and salmon charcoal-broiled on the spot. Our ground handler Jobelle Lim of Belle Horizon Travel did a perfect job of pulling these things together.

Davao is teeming with exotic islands, great for snorkeling and diving. The famous gigantic clams are found just a few feet under water. While coral reefs and colorful fishes abound in the Philippines, only on this side of the islands can you find giant live clams that will open and close with spectators getting around them. The shells are big enough to enclose a child swimming too close to it! Hence, divers carefully watch these nature’s gifts as part of Davao’s and Samal Island’s pride. To see these giant clams is one of the unforgettable highlights of the trip. 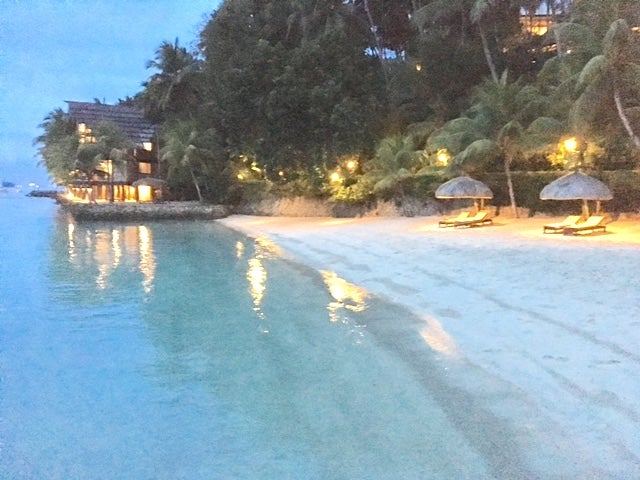 Pearl Farm beach resort, the jewel of Samal Islands, boast of luxury spa and stilt house accommodation, 23 hectares of serene hideaway nestled in the Islands of Samal and Malipano. Its scenic coastline is adorned by rock formations and white-sand beaches, clear blue waters abundant with marine life. Modern amenities and water sports attract all types of tourists and local residents. Getting there is part of the experience itself as especially designed boats pick up passengers and savor the view of the famous Mt. Apo and Davao Gulf.

For absolute privacy, the resort complex has another adjacent island with a few select three-bedroom villas built for close family affairs, the same residences used by the owners. A couple of peacocks roam around and stand guard. The resort is known for its iconic parola or lighthouse, from where ancient mariners kept watch over their coastline. Once known only to the upper echelons of Filipinos, Pearl Farm is wooing the rest of the world, given its highly competitive rates well within the reach of immigrant Filipinos.

As an additional incentive, the Department of Tourism announced a promotion to Bring Home a Friend for US residents and dual citizens to invite a foreign or balikbayan family and friends to visit Manila, and qualify for grand raffle prizes of a condominium unit, a new car, or a shopping spree. The invitee can win round-trip tickets and vacation stays. Register and start sending invitations online at www.bringhomeafriend.online

Finally, a visit to Davao is not complete without a quick chocolate-making session courtesy of the world-famous Malagos Chocolate, featured at the United Nations Chocolate Festival in New York. Guests are brought to a chocolate laboratory to do a hands-on concoction of their own chocolate candies spiced with favorite flavors, mint, caramel, salt, fruit chips and nuts. The complex also offers bed and breakfast hotel and wedding banquets.

On our way back to Manila, one last durian shopping at the old favorite, Apo ni Lola, where Davao products like malong, men’s embroidered shirts and colorful fabric wallets and bags abound. Here, your US dollars can buy a whole lot. Manila Marriott Hotel provided convenient stay for travelers with free airport shuttle, and for world travelers, it boasts of Executive Lounge breakfast and open bar access.

Meanwhile, the nation’s carrier, Philippine Airlines, announced that direct flights to JFK New York will commence in June 2018, coinciding with the start of summer and the Ambassadors’ Tour in July 2018 hosted jointly by the Philippine Ambassadors, Consuls General and Tourism Directors based in the U.S. and Canada, now going on its 12th year.