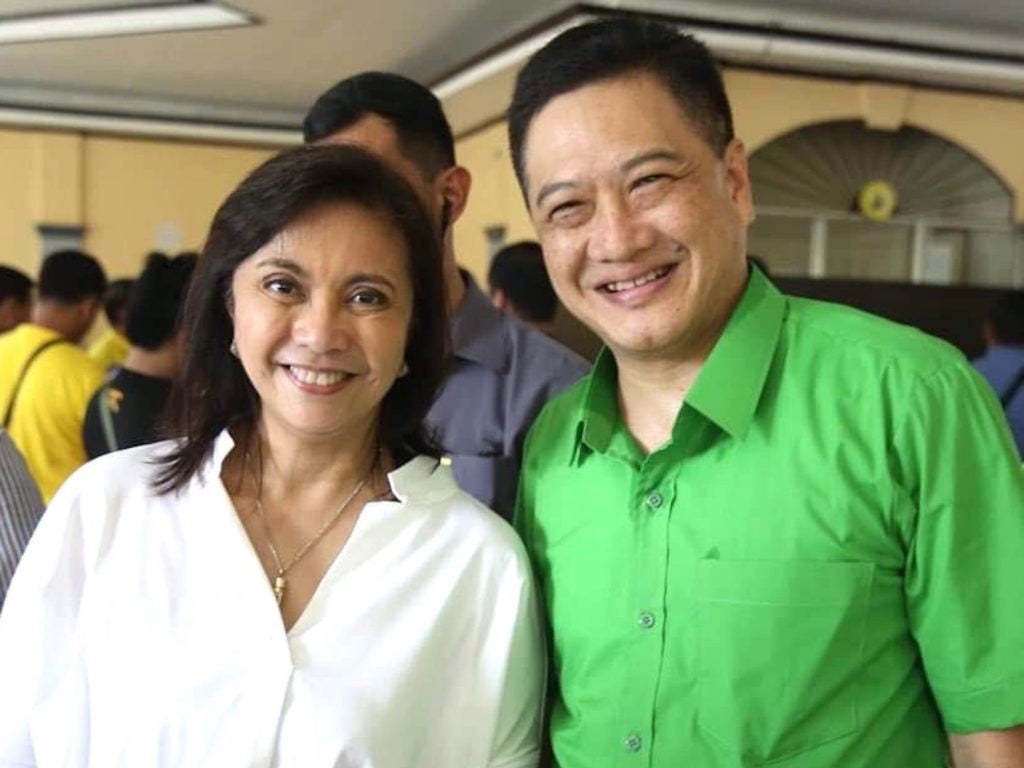 By mid-September, Leni Robredo still had not decided whether she would run for president, Erin Tanada told me in a recent conversation.

She was really hoping for a united opposition ticket. But then it quickly became clear that that was not going to happen.

In early October, she called a meeting. Erin noticed a change in the vice president who had agonized for weeks over a tough decision: “When I saw her, magaan na ang mukha niya (her face looked lighter),” Erin, who is part of the Robredo campaign leadership, told me. “Parang hindi na siya nagdadala ng problema (as if she was no longer burdened). You could see a certain peace of mind already.”

That’s when Robredo told them she was running. When she later publicly announced her candidacy, she declared: “Itataya ko ang lahat. Sama sama tayong tumaya sa labang ito (I’ll give everything, together let’s give our all).”

But to her own campaign team, Robredo also stressed an important point, Erin said: “It is important to listen.”  The reminder was based on a key lesson from the unsuccessful Otso Diretso campaign in 2019. Erin said Leni told them: “We were preaching to the crowd and we did not listen.”

Erin told me about how Leni made the decision to run and her insights into how they should run the campaign in a video conversation last Sunday.

I’ve known Erin since the ‘70s when we were high school mates at Ateneo, and fellow activists in the student movement in the 1980s.

His grandfather, the late Lorenzo Tanada, was, of course, a revered figure in the activist movement, together with another towering figure in Philippine politics, Pepe Diokno. Erin’s dad, Wigberto Tanada, also played a critical role in the fight against the Marcos dictatorship and in the post-Marcos era as a senator.

Erin talked about the challenges faced by the campaign and the lessons from past  campaigns, not just Otso Diretso, but other battles in the ‘70s and ‘80s, when the country was ruled by another tyrant.

And he offered his own insights into Leni Robredo and her unique, progressive leadership style, how it was honed by her years as a human rights and public interest lawyer and as a vice president who emerged as the most effective public servant in the middle of a pandemic.

How did you find out that Leni Robredo had decided to run?

As early as the second week of September, she was already informing everyone that she really wanted to pursue the unity talks and that she was not inclined to run at all. We were thinking of all the possible scenarios but with the hope that she would consider running.

Why was she hesitant?

Her main objective was to end this administration and to make sure Bongbong Marcos or any Marcos candidate would not also win. Considering that her numbers were not actually good — and I understand this — she mentioned when we would meet her na mahirap sa kanyang konsensya kung tatakbo siya at siya ang rason kung bakit nanalo ang gobyerno uli, meaning Duterte. or mananalo si Bongbong Marcos (her conscience couldn’t take being the reason a Duterte candidate or Marcos won). That’s why the call for a united opposition.

She tried. She really tried her best. Walang nangyari (nothing happened). It went all the way to the third week of September na wala pang kasiguraduhan (without any certainty). Nagulat kami na Isko declared (we were surprised when Isko declared). Nag-declare na rin siya ng vice president (he also declared his vice presidential mate). So it narrowed her options a lot.

She felt there was really no opposition candidate who could run against the Duterte and Marcos camp. And she made the decision.

How did you personally find out about her decision?

I think it was Oct. 5. We were called, the LP party leadership. When I saw her, magaan na ang mukha niya. Parang hindi na siya nagdadala ng problema. You could see a certain peace of mind already.

I would share that on September 13, some of her friends, including myself, wrote her letters, private letters. Yong private letter ko was more of: whatever her decision was as long as she had peace of mind. She had done a lot already for the country. We would respect her decision. Ganoon ang tono (that was my tone).

On Sept. 24, I wrote her another letter when she was already dead set that she was (not running). I was trying to situate her on what we were facing. Then I recalled our conversation in one group where she was part of [during the 2016 campaign] on why it was important for her to run as vice president. I remember that I made a point that, of all the vice presidential candidates that were announced and were running, she was the only one who could articulate what happened during Marcos’ time.

There is the concern that the campaign’s momentum is still based on the middle class, even the upper middle class. How do you react to that concern?

I would accept that analysis. I think everyone in the camp also knows about that. Some people also say it is also the middle class that can lead the main bulk of the “D” towards victory. If you look at the history of EDSA, it was basically a combination of both that toppled the Marcos dictatorship, basically the unorganized. There is a conscious effort in tweaking the messaging and how we should reach out.

Historically, in close elections, the incumbent has an advantage. There’s the issue of cheating and who controls the machinery.

Ano ang pinakamalaking challenge at this stage? What’s the biggest headache for the campaign?

The biggest headache of course is VP deciding late. But what can we do? [Laughs.]

So everything is in catch up mode right now. Of course, resources are also in catchup mode. We were seeing noon na maraming gustong tumulong, pero tinatanggihan pa ni VP (many wanted to help, but VP still refused them) dahil this was month ago (when she was not yet sure). So maraming hindi niya tinanggap. So hopefully those who have expressed support for VP would now come back. Were very appreciative of the work of individual persons. Ang kinakatakutan ni VP ay iyong gamitin ang pangalan niya and it would be unscrupulous people raising funds (her biggest fear is unscrupulous people raising funds in her name).

With regard to dayaan (cheating), in a close campaign it becomes critical that we have to insure na the poll watchers are in place as early as now. Dapat pinag uusapan na ang distribution,  ang presence ng mga abogado down to the munisipyo, kung kakayanin (we should already be discussing poll watcher distribution, lawyer presence) down to the precinct. Ito iyong wala noong 2019 campaign ng Otso Diretso (this was not done in the 2019 Otso Diretso campaign).

Aside from the machinery, ano iyong big lesson (what other big lessons) from the Otso Diretso campaign?

We were not able to expand beyond our echo chambers. It was also a realization na ginamit ng administrasyon iyong fear sa allies na pwedeng sumoporta sa mga kandidato (that the administration used fear to intimidate potential supporters).

There is a strong perception, of course, that Duterte is popular. Kahit disturbing ang (despite his disturbing) style of leadership and governance, he appeals to people.

Tama yon (that’s true). It creates like a cult following. Right now, it’s more of people’s identification with him. But if you look at how people look at issues, parang magkasalungat nga ang popularity niya at ang pagtingin nila sa kahirapan (it seems his popularity and their feeling of poverty are contradictory). That’s a disconnect.

That was the situation in the ‘70s when Marcos was popular for a time at the beginning of the dictatorship. The opposition then tried to break the grip of a popular authoritarian by joining elections that they knew were going to be tough to win. How do you look back on those experiences?

Ang key talaga iyong ingay mo kailangan mong ibaba sa komunidad (connecting with communities is key). If you look at the 1978 campaign, what the opposition did in 45 days was to bring the campaign to the communities, down to the kalye kalye sa barangay (street-level neighborhoods). Magtatayo lang ng maliit na stage, tapos magsasalita (we would simply put up a small stage and then speak) with the help of the different civil society organizations at the time.

Noong 1978, ang campaign manager ng Lakas ng bayan was my grandfather. My grandfather said let us make use of this opportunity to expose what was happening under martial law.

We should not just rely on motorcades. We go down to the communities and listen. Sabi nga ni VP Leni, ang problema sa 2019 campaign, we were preaching to the crowd and we did not listen. It is important to listen. At the end of the day, kailangan maramdaman ng botante na iyong mga nakikita nila, nakikita rin natin (people should feel that we also see what they see).

There have also been comparisons to the 1986 campaign, and comparisons between Cory Aquino and Leni Robredo. Anong masasabi mo sa paghahambing na ito (what can you say about this)?

The main similarity syempre is they’re both widows.

The other difference is that VP Leni’s track record comes from walking with the basic sectors as a lawyer, a human rights lawyer or a public interest lawyer in Naga. Iyong ang pagkakaiba (that’s the big difference.

I don’t want to sound na mas magaling si Leni. Pero kung titignan natin kung paano mag isip si VP Leni, ito ay base sa kanyang karanasan bilang public interest lawyer (I don’t mean to say that VP Leni is more competent, but her thinking comes from her experience as a public interest lawyer). This came out when the Kidapawan massacre happened. Iyong one side, the government under President Aquino, they were trying to pin the blame on the farmers.

Ang approach ni VP Leni was, “Hintay muna. Tanungin natin kung bakit nandoon ang mga magsasaka.” So iba yong framework ng pag iisip. (Her approach was, wait, let’s find out why the farmers were there in the first place) I don’t think President Aquino had that kind of framework, not to say anything bad about President Aquino. She had a role to play. She had so many challenges also facing her government to try to maintain the democratic system despite all the challenges. Si VP Leni, puwede nating sabihing mas tinitignan niya kung bakit ganito ang problema natin (We can say that, by contrast, VP Leni tries to figure out the source of our problems).