By: Isabel Buenaobra - @inquirerdotnet
INQUIRER.net US Bureau/Manitoba Correspondent / 01:52 AM November 30, 2017 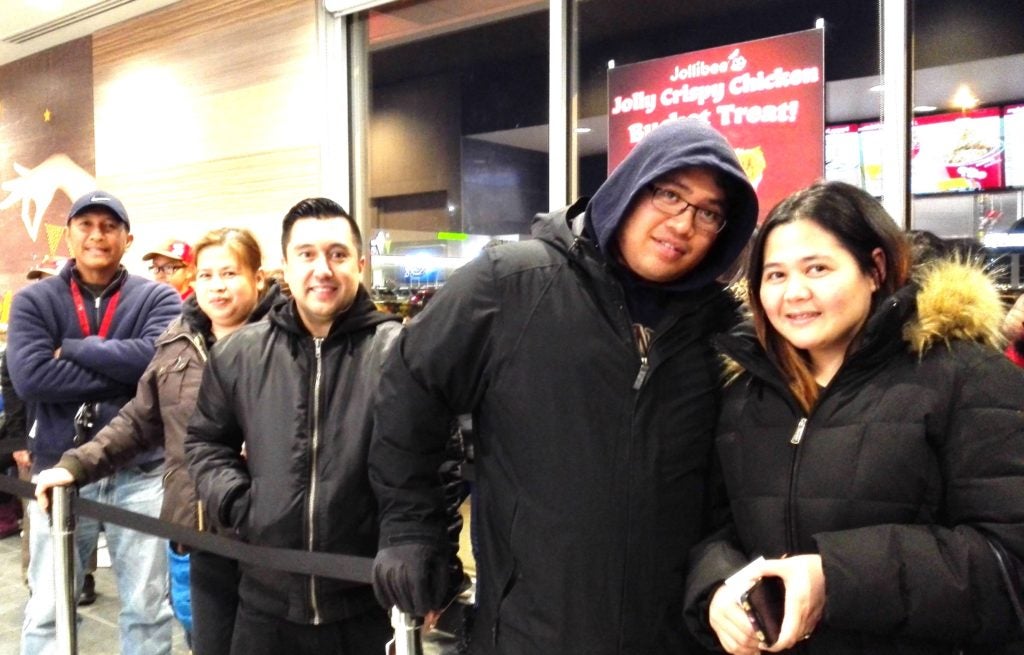 WINNIPEG, Manitoba — Winnie the Pooh (created by A.A. Milne after a black bear who was named Winnipeg by his first owner, Captain Harry Coulbourn), would have said November 28 was a rather blustery day.

Blustery or not, it did not stop the throng of patrons at the opening of the second Jollibee store in Canada, located in Northgate Winnipeg. It is two-and-half-times bigger than the Ellice branch, which opened in December last year. Why open another branch in the same city? Will the two stores not compete for the same market?

Not so, says Maribeth de la Cruz, vice president and general manager of Jollibee USA. “Winnipeg has a large Filipino community, and the Ellice branch was not sufficient to serve the immigrant population. Filipino Canadians in Northgate find it inconvenient to travel to Ellice, so when they learned that we were opening a branch in Northgate, they were very happy.”

Like the Ellice branch, the Northgate store also has a drive-thru, which will be operational in a week. The drive-thru is currently being used for queuing patrons into the store. Based in Los Angeles, de la Cruz is in Winnipeg for a week to support the Northgate crew. Next week, she flies to Hawaii to open Jollibee’s 5th store.

Jollibee is present in Asia, Middle East and North America. It has 36 stores in the United States, two in Canada. There are plans to open two stores in Toronto (Scarborough and Mississauga in February and May, 2018, respectively), and in Edmonton, British Columbia, and Calgary in 2019. 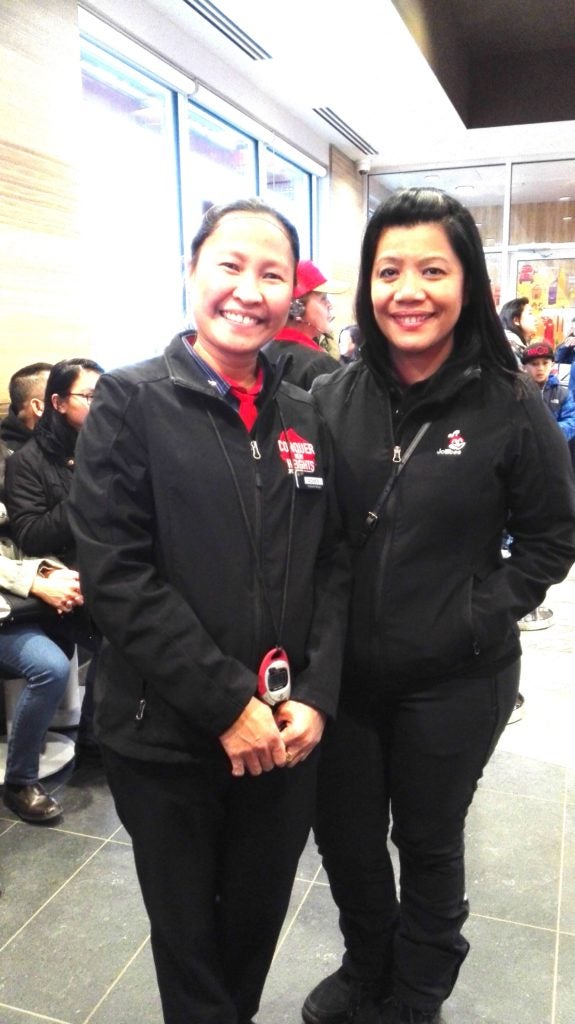 Jollibee is already a global brand—it is first in Asia and 9th in the world, according to de la Cruz. It hopes to establish stores in Europe as well–Milan in 2018 and London in 2019.

Filipino Canadians were excited at the opening of the Northgate branch. Patricia Camangian, a working student and immigrant since 2011, says she patronizes Jollibee because it reminds her of home.

Ditto with Lancelle Anne Briones, who says, “Having been in Canada for eight years, it’s great to have a piece of home in Canada. I haven’t been back in the Philippines for a long time, so I like going to Jollibee. I grew up eating Jollibee back home and I am excited about the opening of a second store. Jollibee is part of being Filipino.”

Her friend, Heidi Rodriguez, agrees. She says, “I love the atmosphere, it’s like being in the Philippines. Jollibee is part of the big Filipino community in Canada. I like sharing Jollibee with everyone else, with both Filipino Canadians and non-Filipinos.”

Janine Orcullo, a student at the University of Winnipeg, patronizes Jollibee whenever she can. Born in Canada of first-generation immigrants, she says she loves Jollibee so much. “I love Jollibee. It’s been my favorite growing up. When Jollibee opened in Winnipeg last year, I was so excited because I remembered that it serves the best palabok in Winnipeg. Jollibee is my best ‘pick me up’ particularly after an exhausting, exam-filled day.”

Her brother, Daniel (who celebrated his birthday in Jollibee on opening day), agrees.

According to Agnes de los Santos, Northgate restaurant manager, they were expecting from about 1,400 to 1,500 patrons on opening day.

“Northgate is a busy area with a large Filipino community. We have 100 crew members deployed in three shifts, and about nine managerial staff who came to lend assistance on opening day,” she explains 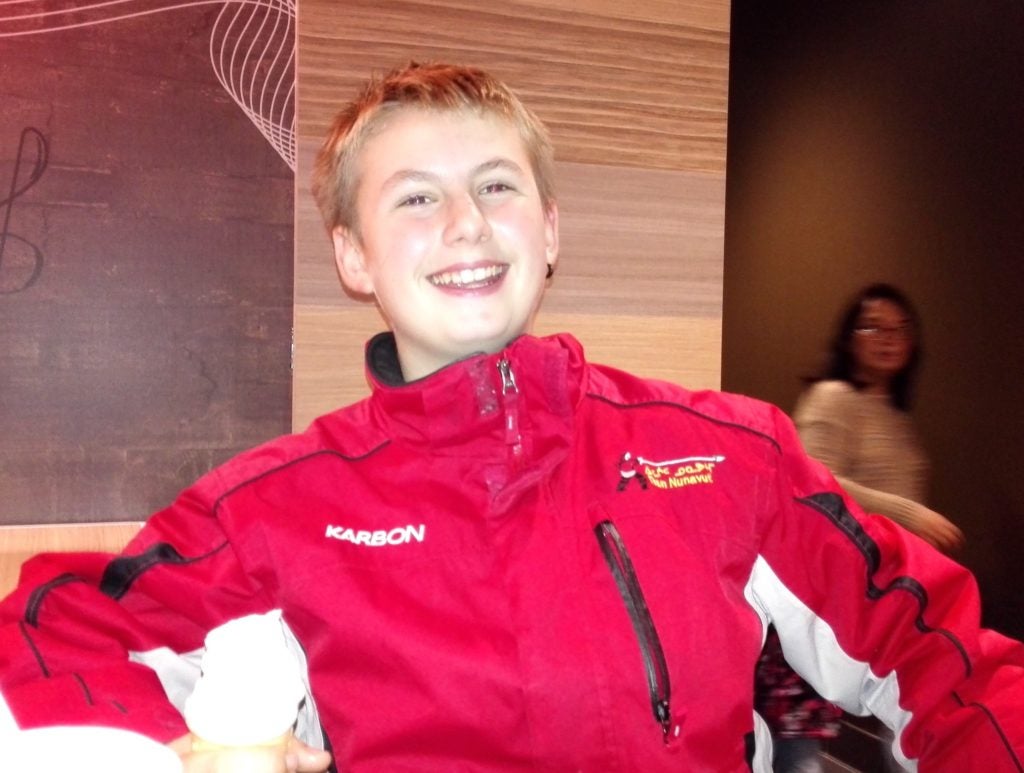 De los Santos worked with Jollibee in the Philippines for 17 years. An immigrant of four years, she worked with another burger restaurant prior to joining Jollibee in Canada.

“I retrained in Jollibee USA to prepare for its opening in Northgate. I was excited to be back in Jollibee. Non-Filipino Canadians go to Jollibee because they love the food, particularly the chicken, spaghetti and peach mango pie. They are starting to like our burger steak, too. We do not yet serve halo-halo, breakfast meals, or Jolly hotdog, primarily because it is hard to secure raw materials for these foods,” says de los Santos.

A hit with non-Filipinos too

Brycen Isfeld, a student, has become a regular patron of Jollibee. “The chicken is good, the service is great, employees are always friendly, patient and never rude. The stores are always clean. The service crew serve quickly and are able to manage the queue,” he explains. 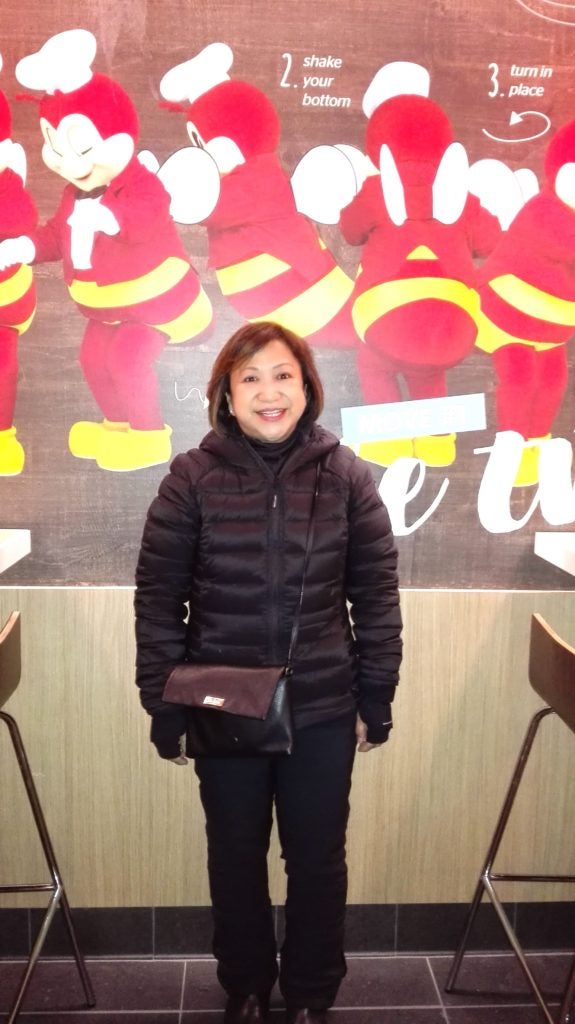 Truong Nguyen, a Vietnamese immigrant of 11 years and a working student, likes Jollibee because it is a well-known restaurant. “I tried Jollibee in Vietnam and was impressed by it. The Filipino community in Winnipeg is huge, so it is popular here as well.”

On opening day, as expected, Jollibee’s mascot made the rounds of the Northgate store, shaking hands, doing funny antics and posing for pictures with patrons, both young and young at heart. As darkness crept at 5 p.m., patrons continued to queue in, not minding the wait, observing the buzz and hum of the store, scrutinizing the order list while waiting for their turn. It is the start of a long winter after all, and comfort food, like Jollibee’s, is definitely a must-have on rather blustery days.