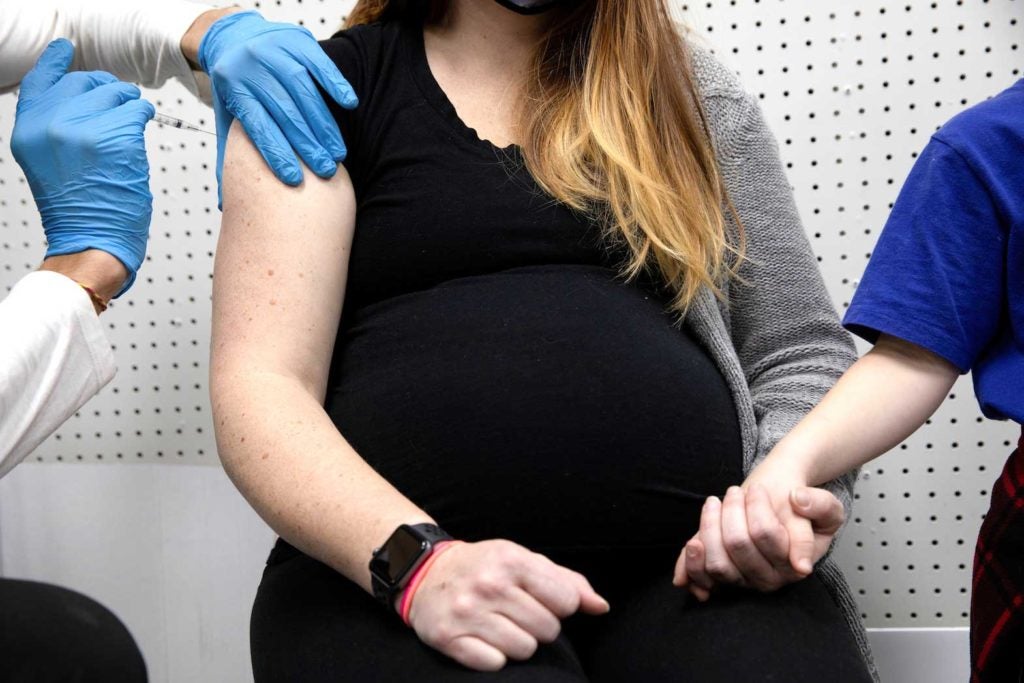 Compared to coronavirus cases earlier in the pandemic, infections with the Delta variant lead to worse outcomes for unvaccinated pregnant women, new data suggest. Doctors studied 1,515 pregnant women with COVID-19 who received care from a large public health system in Dallas from May 2020 through Sept. 4, 2021. Overall, 82 women – 81 of whom were unvaccinated – developed severe illness, including 10 who needed ventilators and two who died. The proportion of severe or critical cases among pregnant women was around 5% until early 2021, and were “largely nonexistent” in February and most of March 2021, the researchers said in a statement. In late summer, during the peak of the surge of the Delta variant, the proportion of pregnant COVID-19 patients requiring hospitalization jumped to 10% to 15%, they reported in the American Journal of Obstetrics and Gynecology. Pregnant women face greater risks for complications with any type of severe respiratory infection, so these findings of the higher risk from the Delta variant further emphasize the need for them to get vaccinated for COVID-19, study leader Dr. Emily Adhikari of the University of Texas Southwestern Medical Center said in a statement. On Wednesday, the U.S. Centers for Disease Control and Prevention called for “urgent action” to increase COVID-19 vaccination among people who are pregnant, recently pregnant, including those who are breastfeeding, or who might become pregnant in the future, saying “the benefits of vaccination outweigh known or potential risks.”

Pfizer/BioNTech vaccine antibodies disappear in many by 7 months

Six months after receiving the second dose of the two-shot vaccine from Pfizer Inc and BioNTech SE, many recipients no longer have vaccine-induced antibodies that can immediately neutralize worrisome variants of the coronavirus, a new study suggests. Researchers analyzed blood samples from 46 healthy, mostly young or middle-aged adults after receipt of the two doses and again six months after the second dose. “Our study shows vaccination with the Pfizer-BioNtech vaccine induces high levels of neutralizing antibodies against the original vaccine strain, but these levels drop by nearly 10-fold by seven months” after the initial dose, Bali Pulendran of Stanford University and Mehul Suthar of Emory University said by email. In roughly half of all subjects, neutralizing antibodies that can block infection against coronavirus variants such as Delta, Beta, and Mu were undetectable at six months after the second dose, their team reported on Thursday on bioRxiv ahead of peer review. Neutralizing antibodies are not the immune system’s only defense against the virus. Still, they “are critically important in protecting against SARS-CoV-2 infection,” said Pulendran and Suthar. “These findings suggest that administering a booster dose at around 6 to 7 months following the initial immunization will likely enhance protection against SARS-CoV-2 and its variants.”

Merck & Co’s experimental oral antiviral drug for COVID-19, molnupiravir, reduced by around 50% the chance of hospitalization or death for patients with mild or moderate infections who had risk factors for severe disease, according to interim clinical trial results announced by the company https://bit.ly/3zVtyE5 on Friday. A planned interim analysis of 775 patients in Merck’s study found that 7.3% of those given molnupiravir twice a day for five days were either hospitalized or had died by 29 days after treatment, compared with 14.1% of placebo patients. There were no deaths among those given molnupiravir but eight in the placebo group. Due to the positive results, the Phase III trial is being stopped early at the recommendation of outside monitors. “An oral antiviral that can impact hospitalization risk to such a degree would be game changing,” said Amesh Adalja, from Johns Hopkins Center for Health Security, who was not involved in the study. Merck and partner Ridgeback Biotherapeutics plan to seek U.S. emergency use authorization for the pill as soon as possible, and to submit applications to regulatory agencies worldwide. If authorized, molnupiravir, which is designed to introduce errors into the genetic code of the virus, would be the first oral antiviral medication for COVID-19.