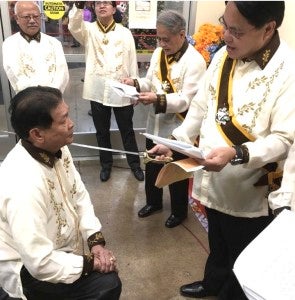 Together with officers and staff of the Philippine Consulate General and some leaders of the Filipino community, Consul General Calonge laid a wreath at the Rizal Monument in Margate Park. He recalled the inspiring life and works of Rizal to uplift the spirits of those present in the chilly morning of Friday, Dec. 30.

Calonge then presided as “Supreme Chancellor” for the Knights of Rizal Central Area assembly later in the evening at Seafood City in Chicago.

New members were also initiated or dubbed as “Knights of Rizal” including Morton Grove Trustee Ed Ramos, PNB Manager Butch Odulio, Jun Delfin and Mark Tan, while honorary membership was granted to Carlos Go, CEO of Seafood City, who was also inducted as a member of the Consulate-based Maynilad Chapter. 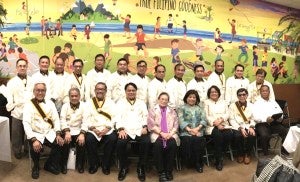 Knights of Rizal and Ladies for Rizal from the USA Central Area attend the Rizal Day ceremonies at the Seafood City, Chicago. FELIX GONZALES

Knight Grand Commander of Rizal Eli Faypon delivered a stirring oration on Rizal as a focal point for unity amid troubled times. Fellow KGCR Dr. Rufino Crisostomo also shared his insights on the growth and impact of the Knights of Rizal in Chicago over the years.

The Maynilad Chapter served as host of the program with Deputy Consul General Romulo Victor Israel Jr. acting as master of ceremonies assisted by Knight Grand Officer of Rizal Felix Gonzales of the Malaya Chapter.

Calonge highlighted the timeless voice and universality of the principles espoused by Dr. Jose P. Rizal that not just Filipinos, but also peoples around the world could continue to learn from.