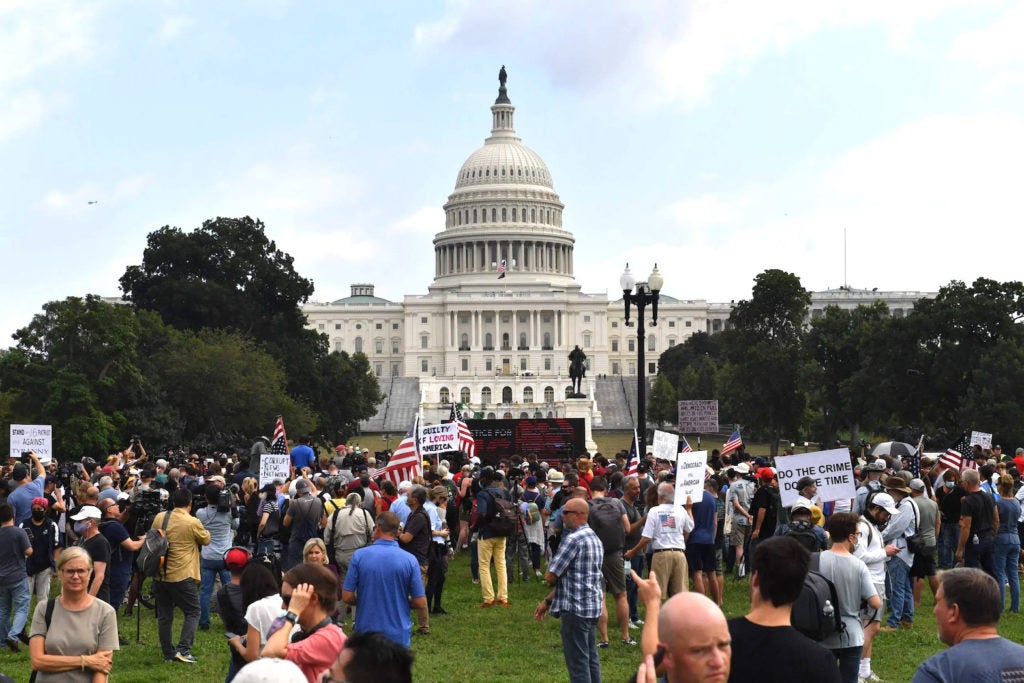 If you saw the embarrassing turnout for the “Justice for J6”  Washington, DC rally that an ex-Trump aide promoted this past weekend to support the Jan. 6 insurrectionists, you have to conclude that the Trump influence is wearing off.

Not even Kene Brian Lazo, the man dressed as a Filipino Captain America holding a shield and a walis tambo was there.

The Norfolk, Virginia, man was one of the more than 600 arrested on Jan. 6, who then pleaded not guilty for participating in the insurrection, and was released. Only the most violent insurrectionists are still being held. But maybe with Lazo, they made a mistake. He was back in Norfolk on Aug. 22 and charged with  sexually assaulting a child.

That’s the sort of folk who answered the call on Jan. 6 to come out and decertify the official U.S. presidential  election.

But most of them didn’t show up on Saturday. If they’re not in jail like Lazo, I think they’re climbing back under their rock. And that’s a good thing for America.

Smart Republicans seem to be waking from the spell of Trump and possibly coming to their senses. Fewer than 400 people showed up at the Capitol for the protest Saturday, and half of them were media.

There were hundreds more police backup to make sure the protest was peaceful. It was. Everyone had their say. And Trump still didn’t win last November.

Coming on the heels of the California Recall, it is a trend worth noting.

“Recall Repulsed Convincingly in California.” That would have been my election night headline last week.

Gov. Gavin Newsom, elected three years ago by the largest margin in nearly 70 years, can now stay in office to lead the state with the most Asian Americans in the nation.

Out of 17 percent of eligible Asian American voters, 7 percent of us actually turned out to vote, according to exit polls.

Congratulations to all of you who voted. Your franchise in our democracy is worth more than any number of Jollibees.

But don’t take your vote for granted. Anywhere. There are still political forces out there that want to take away the power of your vote.

I’ve waited to comment further about the election because the leading replacement candidate, Republican Larry Elder, hinted prior to the election–without evidence–that lawyers were at the ready in the event the vote was rigged. Sure, he was trying to show a touch of grace after the election when he said, “We may have lost the battle but we are going to win the war.”

But that doesn’t say he’s dumped the idea of challenging the results. I wanted to call his bluff.

As of late Friday, the Calif. Secretary of State reported these results:

YES to Recall had 3.9 million votes.

The NO to Recall side had 6.7  million votes.

That would require a lot of rigging or dead people voting.

The state has 30 days to count and certify all the ballots.

So far, the only mention of anything suspicious has come from the electoral conspiracist-in-chief, the rigmeister himself, Donald Trump, who released a statement election night alleging “rigged voting” in California with zero evidence.

It was just enough innuendo to keep hope alive for his base of Republicans who are still convinced of Trump’s “Big Lie.”

The lie that Trump defeated Joe Biden in last November’s election is still believed by many Americans to this day.

A CNN poll this month asked if Biden legitimately won enough votes for the presidency, and 78 percent of Republicans and 35 percent of independents said No. Who do they believe won? Trump, of course.

There aren’t that many Republicans to begin with in California, but had the recall effort succeeded, Elder, who led the 46 replacement candidates, would have been elected governor with a mere 2.4 million votes.

That’s all it would have taken to replace Newsom, who won the governorship by a vast majority of 7.7 million votes in 2018. That’s how ridiculous and dangerous this whole recall effort was to democracy.

On top of it was the cost.

By the state’s own estimate, the cost is around $277 million from California’s General Fund. But add to that the individual campaigns’ expenses and the costs of this recall could easily be double the state’s estimate.

So much for the fiscal conservatism of Republicans who saw the recall as just another reasonable effort to use the “Big Lie” mindset to cast doubt on our entire electoral system. It just didn’t work in California.

Your vote is still threatened

But that brings us to the bad news. Recall fever, or any form of election challenge, is not going away. Trump’s made it a “thing.”

It’s the only way a shrinking Republican party–whose actions reveal it to be anti-people of color, anti-black, anti-gay, anti-women–can hope to win elections in a diverse country like ours.

So, instead of competing on the issues, Republicans are hell-bent on challenging every election loss and making it harder and harder for everyone, especially Asian Americans and all people of color to vote.

There are 31 new voting laws in 18 states that have added new restrictions on things like mailed ballots and same day registration/voting. California has both of those.

The stated fear is electoral integrity, but that’s fraudulent rhetoric from Republicans who are fond of the saying, “We’re making it easy to vote and harder to cheat.”

No, the laws they’re changing are making it easier for Republicans to manipulate the vote and harder for people of color to exercise their franchise.

Even before the ballot box, the threat is coming in the redrawing of political districts at the state and local levels. That’s always been an issue, but especially this year with the Census showing unprecedented growth among all people of color, including those who of one or more races.

The so-called “browning of America” demands that all the electoral maps be redrawn with significant public input to reflect a more diverse America.

But so far that’s not happening.

The Voting Rights Working group, a consortium of social justice advocacy non-profits,  just released a statement that some state and local governments are “omitting, often willfully” opportunities for people of color to make their voices heard in the redistricting process.

It’s time to speak out at the grassroots level, or we can get aced out of the process in the map drawing, even before we get pushed back at the polls.

I said a month ago after interviewing Newsom that considering the real consequences of this recall election, it would not be hyperbolic to say this could be the single most important election for Asian American voters in California, maybe ever.

Four weeks ago, Newsom’s odds to beat the recall was a coin flip. When I got a chance to interview Newsom, he looked weary, and maybe a bit concerned.

Newsom turned it around when he made the Republican attempt to nationalize the election backfire. The national GOP made the recall a referendum on Trump with Black conservative Elder the uber-Trump proxy. But it motivated Democrats who didn’t care about Newsom to actually come to the polls to save the state–from the Trumped-up GOP.

The decisive rebuke of the recall effort is the piece of positive news in this era when Republicans cast doubt on our system at every turn.

Sure, maps will have to be redrawn in California too. But with just four weeks to election, Newsom was able to repulse Trumpism and show there’s still some fairness and integrity in the process.

So let’s bask in that positivity for now.

Democracy works. But threats exist all over the country. We can prevail, but only if we realize and cherish the true value of our vote.

What the Justice for J6 protest showed this week is there is a peaceful way to disagree in public.  First Amendment protections are still strong in America.

But this time, law enforcement was there to protect the peace and government property.

Let’s hope the failure of the recall and the J6 protest is really a sign of a dwindling Trumpism in America.

No shows? Thank goodness. America needs them to go back under the rock from whence they came.

Emil Guillermo is a journalist and commentator. He writes a column for the North American bureau. He vlogs at  www.amok.com Or live at 2p Pacific on Facebook (emilguillermo.media) or on YouTube.