‘The  next best thing to actually being free’

‘The  next best thing to actually being free’ 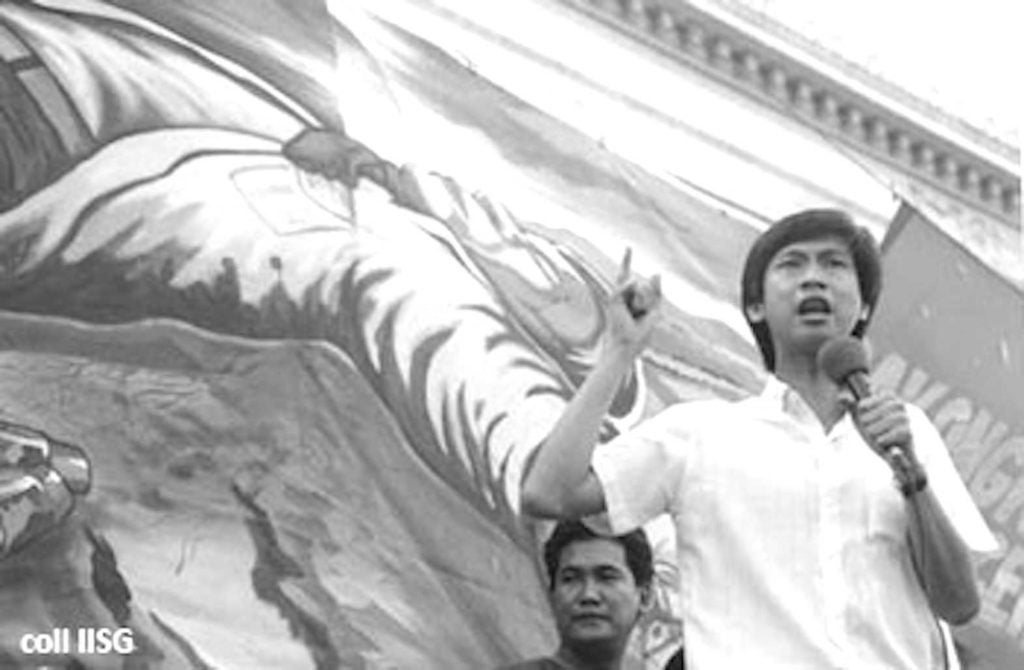 September is the month when we need to remember, to reflect, to understand.

Many things happened in September. This month marks the 49th anniversary of the declaration of martial law, which gave rise to the Marcos dictatorship.

One of the heroes who fought the brutal regime, Edgar Jopson, would have turned 73 this year. He was killed by the Marcos military 39 years ago this month.

And there’s another anniversary that’s very important to Filipinos of my generation. This month marks the 34th anniversary of the assassination of Leandro Alejandro, the youth leader who has come to symbolize the Martial Law generation, the generation Marcos tried to deceive into following his lies and accepting his treachery — but who rose up and even led the fight to overthrow him in 1986.

I wasn’t planning to write about the anniversary. But then I read the Facebook post by Lidy Nacpil, Lean’s widow.

“It’s that time of year again,” she said. “September 19.  Of course even after 34 years you are still frequently in my thoughts.  But most of the time I focus on the good memories and being thankful for having spent part of my life with you though too briefly,  But when this day comes around I cannot help but let the pain of loss rise to the surface and take over. And on this day, I allow myself that.

“I have been thinking about death too often these past months. We have lost so many, far, far too many family members, friends, colleagues, acquaintances, people whose lives touched ours, people we haven’t met.  I guess having the experience of losing you has made me even more sensitized to the pain of losing others, and more aware of what it is like for those who lost loved ones.  The flood of devastation, despair, longing. And not knowing how you could possibly endure and what living the rest of your life would be like.  If you were still around, you would surely be heartbroken with the countless deaths, the heightened suffering, and enraged by the blatant injustices,  the deep flaws of the system that are exposed even more clearly. But you would still be doing your best, and doing even more,  to fight for change.”

Lean is known for memorable lines that continue to inspire us today.

“The line of fire is a place of honor,” he said, which captured the idealism during our time, during those final years in the battle against tyranny under Marcos.

It was the spirit that drove us to march, to face off with armed police, to risk being hurt or worse in confrontations with Marcos’s security forces, many of whom behaved like goons.

Many of us survived those confrontations in the line of fire. But not Lean and many others.

“The line of fire is a place of honor,” is also inscribed on the beautiful San Francisco mural painted shortly after his assassination in 1987. In it, Lean’s arms-linked with other activist icons including Wangari Maathai and Benjamin Linder.

It’s a bold, powerful pronouncement which remains relevant today. But lately, I find myself drawn to and remembering something else Lean Alejandro said: “The struggle for freedom is the next best thing to actually being free.”

That’s because it just seems more timely and worth remembering and reaffirming at a time when the struggle for freedom, for justice, for decency in government, for leaders with integrity and genuine commitment to the nation — for so many things — has become, once again, an important fight.

A president who inspired mass slaughter has become even more brazen demonstrating that he has zero regard for the welfare of Filipinos now reeling from the devastation of a global pandemic.

Meanwhile, the Marcos forces are struggling to erase the past and getting some help from shallow, clueless entertainers.

The good news is, many Filipinos, especially young people, know better and are speaking out. And there are some leaders, led by Leni Robredo and Vico Sotto, who are showing another path, another style of governance, dignified, effective, committed to the needs of a struggling society.

In her note, Lidy also said: “It has been more than 3 decades but so many people continue to be inspired by and deeply grateful for your life, your leadership, your compassion, your example, and their memories of you. And share in many different ways, so that others may know you too.  I know you will be deeply moved and thankful. But I also know that even if you may be forgotten, it is enough for you to have given your all in the service of our people, fighting for justice, freedom and truth with courage, without flinching. And that the most important thing is that the fight continues.”

That last part threw me off a bit, what she said about Lean “may be forgotten …” And perhaps it underscored the exhaustion many Filipinos, including activist friends like Lidy, are starting to feel in this time of murder, corruption and brazen shamelessness under Rodrigo Duterte.

Another bit of good news: that’s probably not going to happen. We see young people fighting back. We see them speaking out. I know many young people who have come to know about leaders like Lean Alejandro — and are inspired by him.

Lidy’s concern about Lean being forgotten — it’s not going to happen. We will make sure of that.

MOST READ
usa MagSafe: Effortless and wireless charging for iPhones
usa Elon Musk Twitter Bid Restructured and Nearly Complete
usa University of Hawaii names nursing school after PH-born nurse
usa Highway marker honoring Filipino sailors who settled in Virginia to be unveiled
usa Donato Dennis Agalli and Rafael Shamsiev Host Fundraising Reception for U.S. Senate Candidate for New York Joe Pinion
usa Available vaccines, treatments for fighting monkeypox
usa Sony to ramp up PS5 production and expand games portfolio
DID YOU KNOW?
The Best Kindle of 2022: Which one should you buy?
A Beginner’s Guide to Buying a Vacuum Cleaner in 2022
Island Hopping in Tulum: The 12 Best All-Inclusive Tulum Resorts
How to Dispute a Debt and Win | Simple Tactics
The 12 Best Lat Exercises for Muscle Growth
Countdown to summer: tips for learning how to surf