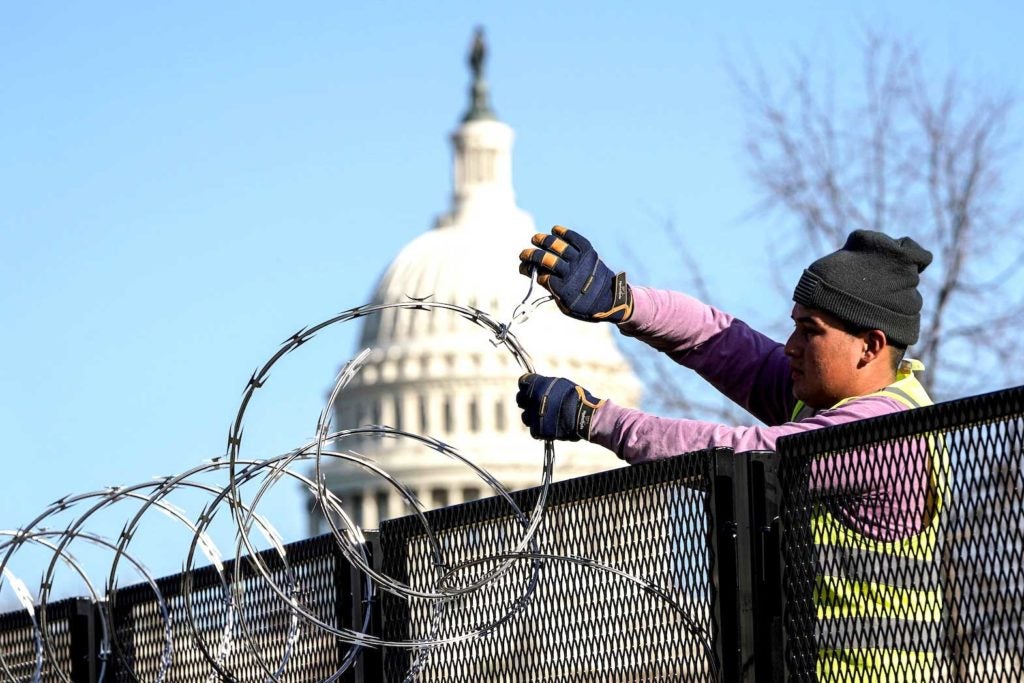 A worker removes razor wire from the top of security fencing as part of a reduction in heightened security measures taken after the January 6th attack on the U.S. Capitol in Washington, U.S., March 20, 2021. REUTERS/Joshua Roberts

WASHINGTON – U.S. government agencies have a Thursday deadline to produce documents demanded by a congressional committee investigating the Jan. 6 attack on the U.S. Capitol, including communications involving some of former President Donald Trump’s closest advisers and family.

The Republican Trump wants executive privilege to be used to stop at least some of the documents from being transferred, a decision that rests with the White House of his Democratic successor, Joe Biden.

Here’s an explanation of how executive privilege works:

WHAT DOES THE COMMITTEE WANT TO SEE?

The House of Representatives Select Committee is investigating the events leading up to and on Jan. 6, when mobs of Trump supporters stormed the Capitol as Congress was meeting to certify Biden’s November election victory.

The panel has asked for White House communications records which are held by the National Archives and Records Administration, as well as material from the Departments of Defense, Homeland Security, Interior and Justice, and the FBI, National Counterterrorism Center and Office of the Director of National Intelligence.

WHAT’S EXECUTIVE PRIVILEGE GOT TO DO WITH THIS INVESTIGATION?

Executive privilege is a legal principle recognized by the U.S. Supreme Court that allows the White House to refuse to comply with demands for records such as congressional subpoenas or Freedom of Information Act requests.

The principle is rooted in the idea that, for the White House to operate effectively, some privacy should be given to presidential advisers so they can have candid discussions.

A sitting president has in the past used executive privilege to keep records and communications from an earlier administration secret, but it is rare.

For example, Trump’s White House cited executive privilege in 2018 to withhold from the Senate more than 100,000 pages of records from then-Supreme Court Justice nominee Brett Kavanaugh’s time as a lawyer in the administration of former President George W. Bush.

If the Biden White House says the requested materials are protected by executive privilege, it will make it much more difficult for the congressional committee to investigate Trump.

But Biden is expected to be sympathetic toward the panel’s view that the materials should be produced. In July, the White House said it would allow former Justice Department lawyers to testify to a Senate committee about Trump’s efforts to overturn his election loss.

Mark Rozell, a political scientist at George Mason University who wrote a book about executive privilege, said it should not be used to cover up evidence of wrongdoing.

Biden’s White House Counsel, Dana Remus, will likely be involved in determining whether executive privilege applies to any of the communications sought by the committee, said Jonathan David Shaub, a law professor at the University of Kentucky.

Remus will also consult with the Office of Legal Counsel, a division of the Justice Department, Shaub said.

“Whatever they turn over will be a precedent for the future,” said Shaub.

A White House official told Reuters that Biden “has been clear that the events of January 6th were an unprecedented assault on our democracy – and he believes they deserve a full investigation to determine what transpired and ensure it can never happen again.”

Executive branch agencies have been engaging with the Select Committee and will continue to do so, the official said.

WHAT ARE TRUMP’S OTHER OPTIONS?

Even if the courts reject Trump’s arguments, he could still succeed in slowing the investigation down, Stern said.

“If he is willing to pay for the lawyers, Trump could delay the production of records for some time,” he said.

Such a lawsuit would be likely be filed against the head of the National Archives and Records Administration.

Rozell said Trump may be aiming to gum up the investigation until November 2022, when Republicans hope to take control of the House.

“He knows Biden is not going to support his privilege claim, but if he can tie it up in the courts … he may be able to run out the clock on the Democratic majority doing their investigation.”