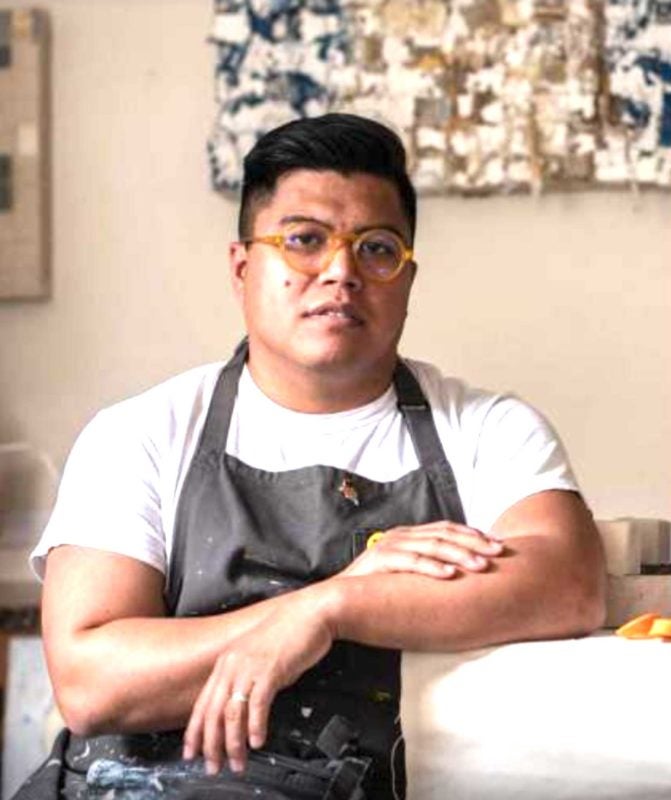 A Filipino immigrant artist, Matt Manalo, is among the more than 50 artists in the sprawling Texas Biennial titled “A New Landscape, A Possible Horizon.”

The artists’ works are shown at various points in their careers and spread between five spaces: four in San Antonio and one in Houston.

The curators behind the Texas Biennial considered more than 850 artists for an independent survey of the work of contemporary artists across the state.

Manalo grew up in Manila, relocating to Houston with his family in 2004. It was a difficult transition, he said, and he had a hard time finding fellow Filipinos. That continued as he launched his career as an artist.

Manalo is represented at the McNay in two different ways. His 2018 piece “Evolution of the Filipino” is on exhibit, as are works by the Filipinx Artists of Houston, a collective he founded in 2019.

“Being a Filipino in Texas, I feel like we are still very underrepresented in the arts,” said Manalo, 36. “To be part of a survey of the best of the best contemporary works from Texas, that’s really huge, and to be able to include my community with me makes it even sweeter.” 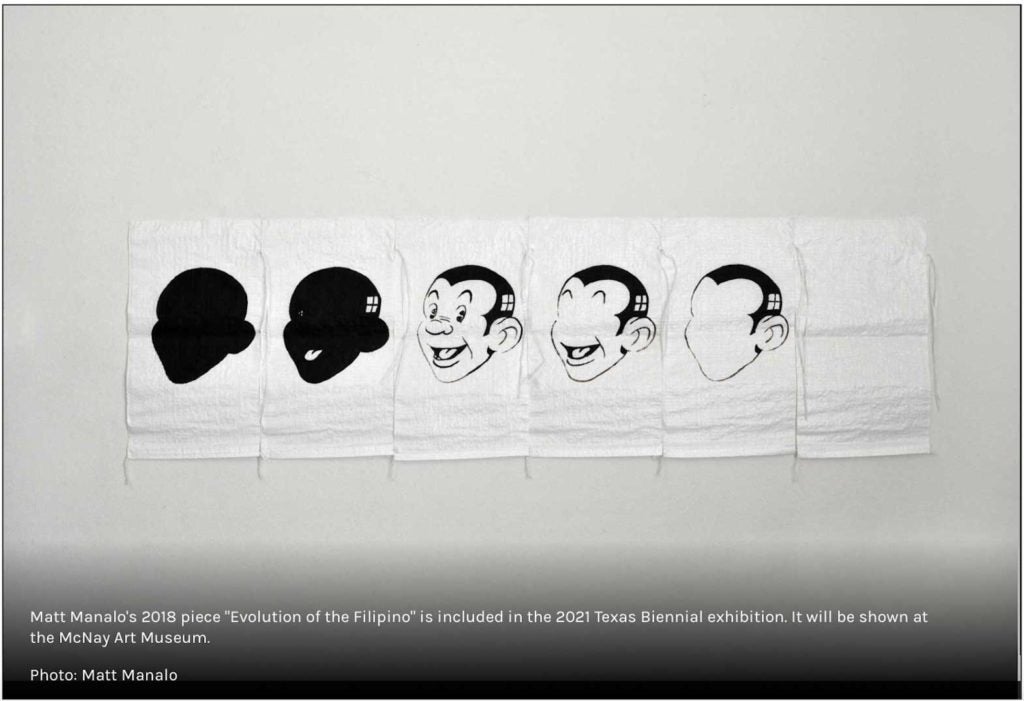 Matt Manalo’s “The Evolution of the Filipino.” TEXAS BIENNIAL

“Evolution of the Filipino” is painted on rice sacks that he stitched together to create a work 108 inches long and 28 inches tall. The first panel depicts a black silhouette of Kenkoy, the first Filipino cartoon character created by a Filipino artist. The image takes on definition in the following panels, then loses those details. The final panel is blank.

Before Kenkoy made his debut in the 1920s, Manalo said, “Filipinos were painted as savages. We were drawn in newspaper comics with the bone in the hair and the grass skirt. Kenkoy is kind of the assimilated version of a Filipino — he wears a Zoot suit, and then he has a big smile and he has much lighter skin and big, bright eyes.

“(The piece) shows a timeline in terms of facial characteristics. … So the last rice sack is basically completely empty — it’s the Filipino that has been completely devoid of values and culture and identity.”

“I think what’s so beautiful about this exhibition is that it is intergenerational,” said co-curator Ryan N. Dennis, a San Antonio native who is chief curator and artistic director of the Center for Art & Public Exchange at the Mississippi Museum of Art.

“We have Donald Moffett and and Melvin Edwards, who are in their 60s and 80s, still working, and then we have younger artists like Irene Reece or Matt Manalo, more emerging artists from Houston.”

This is the seventh edition of the biennial, which was founded in 2005 by a group of Austin-based artists to create a snapshot of what’s going on in contemporary art in the state. Initially, it was held every two years, but since 2013, it has been held every four years. It is produced by the Austin arts nonprofit Big Medium.