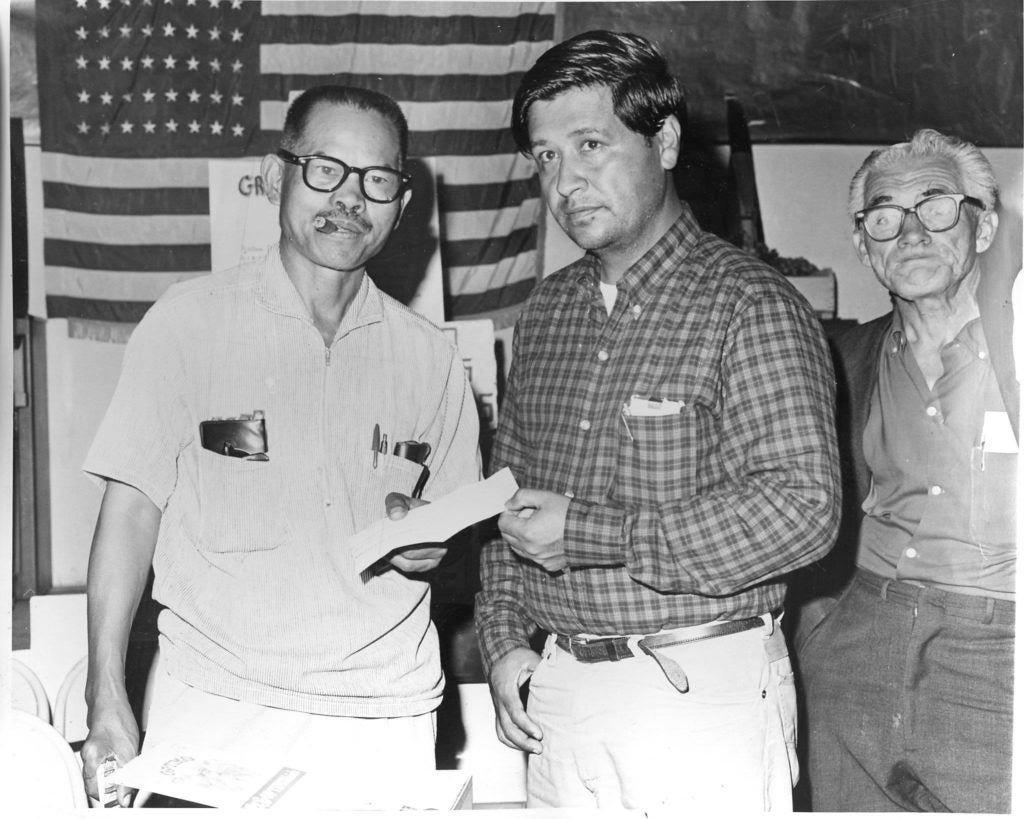 Larry Itliong (left with Cesar Chavez) organized the grape strike that led to the formation of the United Farm Workers. CONTRIBUTED

SAN FRANCISCO – In September 1965, Filipino farm workers went on strike and walked off from table-grape farms that they labored on for less than minimum wages in Delano, California.

Soon to be published by Bridge + Delta Publishing, Journey for Justice: The Life of Larry Itliong, by Dawn B. Mabalon, PhD with Gayle Romasanta and illustrated by Andre Sibayan, will finally shed light on Larry Itliong’s story through the first in a planned series of eight children’s books that deals with Filipino American historical figures. 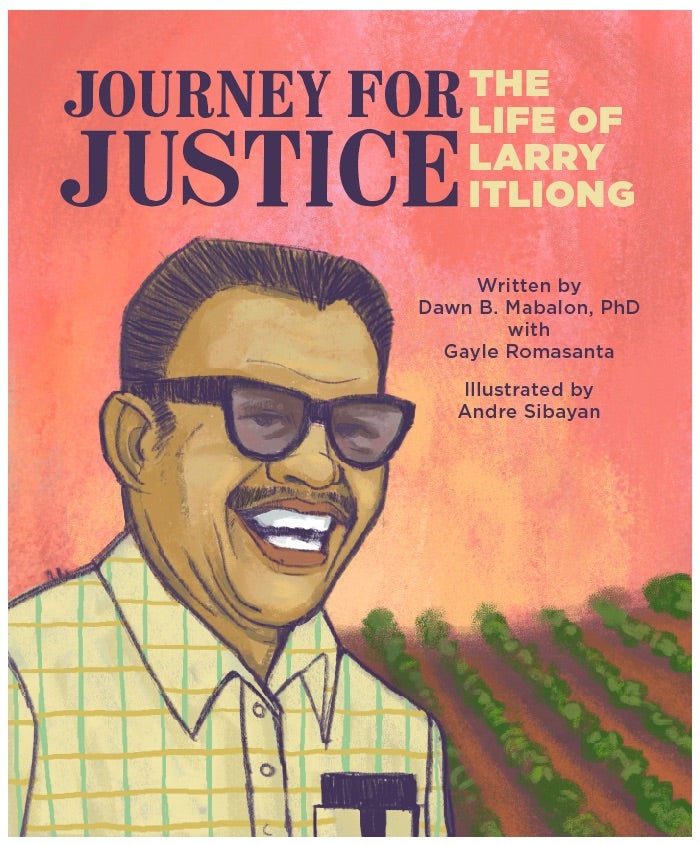 Mabalon came across Larry Itliong during the writing of her book, Little Manila is in the Heart: The Making of the Filipina/o American Community in Stockton, which won honorable mention as best first book by the Frederick Jackson Turner Award of the Organization of American Historians.

“The tragedy of growing up in Stockton from a farm working family and not knowing who Larry Itliong was struck me. He literally lived not even half a mile from where I grew up,” says Mabalon. Quoting her friend, Dillon Delvo, executive director of Little Manila Center in Stockton, “It’s like growing up in Birmingham, Alabama, but not knowing who Martin Luther King was.”

Mabalon says it has been her privilege to have gone to the best universities and have access to resources and networks. “My way of honoring manong Larry’s sacrifices and the sacrifices of my family who came over and worked the fields is to tell their story.”She has been doing research and writing a biography of Larry Itliong for the last three years. The project has proved challenging in the face of limited time and resources on top being a history professor teaching three full classes at San Francisco State University. “I had a sabbatical to start working on it and a little bit of research money, but with a project like that I would need, ideally, a year to write with lots of travel money since all of his [Larry Itliong] papers and the UFW papers are all in Detroit,” says Mabalon. “But I have enough research done to write a children’s book.” When Romasanta approached her about the children’s book project, Mabalon readily agreed. “It’s amazing, especially because our generation, the Ethnic Studies, Filipino American Studies generation who all went to college and went through this process of being awakened and politicized, many of us are educators or who work in non-profit among other things. But still there is nothing for our kids. I feel that the generation before us broke it open for us, to have Ethnic Studies, now it’s on us to provide that for the next generation,” says Mabalon.

“I was given a children’s book about Cesar Chavez to read and I was surprised to find that there was no mention of anyone else starting the UFW but Cesar Chavez. I knew this wasn’t the whole truth and I knew that children throughout the state were learning a partial truth about California farm labor history. I wanted to change that.” 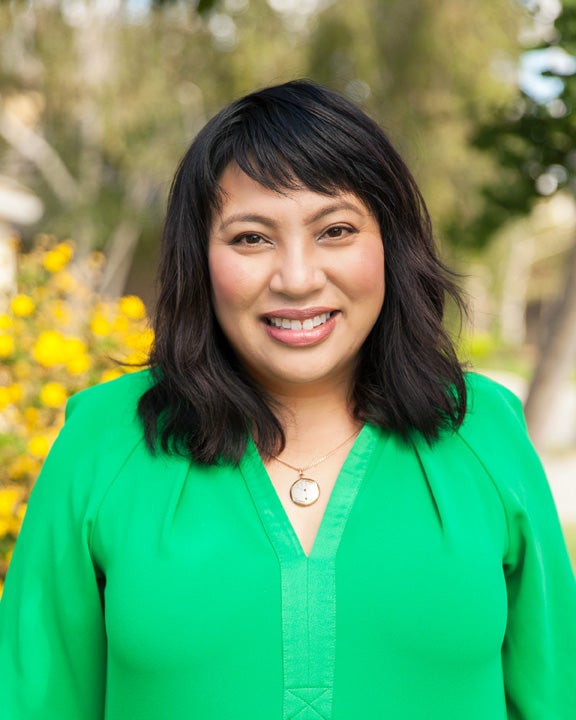 Romasanta owns and runs Bridge + Delta Publishing, named in the spirit of her 11-acre family farm that was in Brentwood, California, bought by her lolo Victor Selga with his brother and six cousins, all manongs who had come to the US in the 1930s. “Bridge + Delta was founded on the spirit of immigrant journeys that are absolutely American at their core. We publish stories for families and communities to understand their past, present and future, so that their immigration story gives them a better understanding of who they are. That way, our communities are not just almost home, they are home.”

Romasanta contacted Mabalon about the children’s book project in early fall last year with illustrator Andrew Sibayan completing the picture. They all have known each other since the early 2000s.

“Working with Dawn and Andre has been an amazing journey,” says Romasanta.

“We all understand the bigger picture, which is telling the story of an unsung Filipino American hero. Hopefully we can do it in a respectful, authentic, and beautiful way,” says Sibayan.

“It’s our generation doing it ourselves and not waiting for the mainstream,” says Mabalon.

Turning the life story of a complex and complicated person such as Larry Itliong into a children’s book aimed for advanced third, fourth and fifth grade readers has its challenges.

“The hardest thing is making sure to balance the authenticity of the historical content while making sure that the artistic style is both appropriate for the age demographic, but also beautiful,” says Sibayan.The other main challenge is the funding needed for the publication of the book as well as the other books in the series. They plan to overcome this through the support of the community that is just developing an awareness about the necessity of telling their own repressed stories. 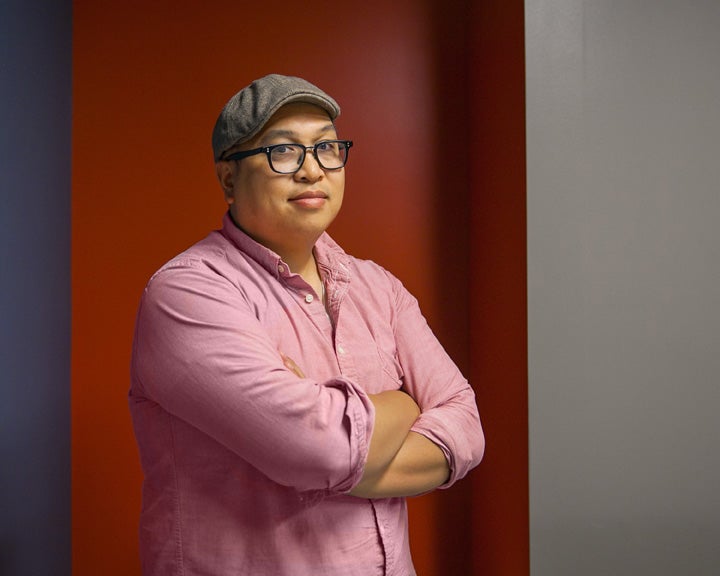 “I think this Indiegogo campaign is the biggest hurdle and finances to do this large scope of a project. This has been an intense experience,” says Romasanta. “It’s really rallying our community to help them understand that when our children see themselves in their history books, it opens their eyes and lets them know that they are valid. There has been research that shows that when children see themselves in textbooks it increases academic achievement.”

Romasanta has faith that the Filipino American community wants to teach the next generation that their history matters, that they matter. “That our community and each individual can make a difference, like Larry Itliong did for the state of California and generations after him.”

“Let’s prove people wrong that Filipinos don’t have a history, that Filipino Americans don’t support books like these, and that there isn’t a need for this for our youth,” says Mabalon.

Mabalon, Romasanta, and Sibayan stress the importance of telling Filipino American stories and that it should be part of K-12 education.

“Many kids and adults still don’t know who [Larry Itliong] was to this day, as his story is largely untold, and that needs to change. It’s important for kids to see themselves and people who look like them in things they watch and the stories they read. Seeing these characters and heroes help inspire them to accomplish things they might think is impossible. Hopefully Journey For Justice, will provide our young people with that inspiration,” says Sibayan.

“I don’t ever want my children to feel like they’re ‘other’ or that they as people of color and of Filipino ethnicity are not seen. I know what that feels like, and I fought against it, with a lot of determination on my part. We should have our history in the public school level, for our children and to reteach teachers who still think that only Cesar Chavez started the UFW,” says Romasanta.

Mabalon shares one of the most powerful quotes that she has in the book from Larry: “You don’t need to know my name. I just want the next generation to know that we Filipinos were a part of this.” Mabalon adds; “That we started this, that we’ve been part of this revolution. People think that it was just Mexicans, but it was us too.” Itliong “didn’t want fame, but I think he’s worthy of that.”

Journey for Justice: The Life of Larry Itliong is slated for publication in January 2018.