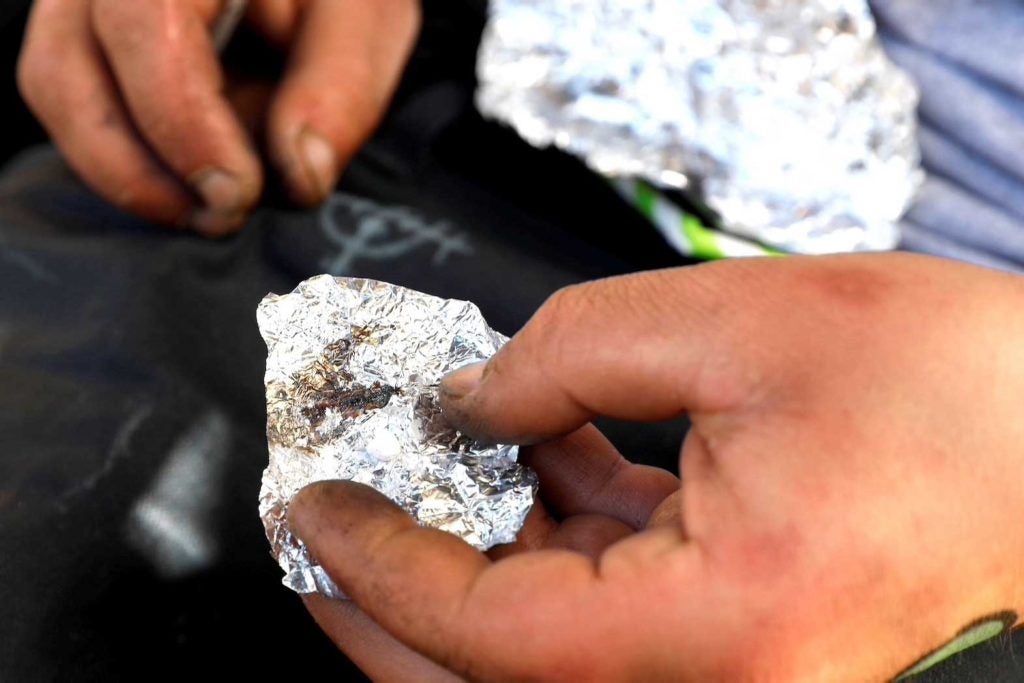 A man living on the streets of San Francisco, California, displays what he says is the synthetic drug fentanyl. February 27, 2020. REUTERS/Shannon Stapleton/File Photo

Weak cooperation between U.S. and Chinese authorities is hindering efforts to curb increasingly sophisticated forms of fentanyl trafficking, according to a U.S. congressional advisory report reviewed by Reuters.

The report by the U.S.-China Economic and Security Review Commission, due to be published on Tuesday, said U.S. authorities have found that cooperation with Chinese counterparts “remains limited on the ground”.

An explosion in the use of fentanyl, a synthetic opioid 50 times more potent than heroin, and its analogues has driven the most devastating chapter of America’s long-running opioid and drug abuse crises.

Combating fentanyl smuggling has become a key priority for U.S. agencies as overdose deaths spiked to more than 93,000 in 2020, mostly linked to fentanyl, according to provisional data by the National Center for Health Statistics.

Deaths surged by more than 21,000 to eclipse a record set a year earlier.

Despite China banning fentanyl and similar variants in 2019, the Asian nation remains the primary source of illicit fentanyl and fentanyl-related substances trafficked into the United States, the report said.

The accusations are unreasonable and unacceptable, said the Chinese foreign ministry when asked by Reuters to comment on the report.

China has strictly controlled all narcotics, psychotropic drugs and chemical precursors, and its efforts are recognised internationally, the ministry said.

There have been some improvements in collaboration as U.S. officials have established working groups, conducted high-level meetings and shared information with Chinese partners that led to arrests.

However, the advisory body warned there “remain significant gaps in U.S.-China antidrug cooperation”.

Chinese regulatory authorities delay requests for access to inspect and investigate potential sites where companies illegally manufacture precursor chemicals that Mexican and other foreign drug cartels use to produce fentanyl, it said.

“Requests are often delayed for days, allowing any illegal operation to vacate or clean up the premises”, the report said.

The authors of the congressional report, titled “Illicit Fentanyl from China: An Evolving Global Operation”, warned that the sophistication of traffickers was growing and both Chinese and U.S. authorities were struggling to adapt.

On top of relocating some manufacturing to India, Chinese traffickers were re-routing shipments via third countries and using new marketing methods to circumvent local regulations drafted by Beijing.

“China’s weak supervision and regulation of its chemical and pharmaceutical industry also enable evasion and circumvention,” the report said.

Both groups operate “pill mills” in Mexican cities, where they manufacture illegal fentanyl to ship to the United States, a growing trend in recent years.

“The growing involvement of Mexican cartels and advanced money laundering schemes have exacerbated the problem”, the report said.

Chinese criminals are increasingly using the Chinese banking system to launder Mexican drug money, the report said, citing an investigation by Reuters into how Chinese brokers were muscling out Colombian and Mexican money launderers.