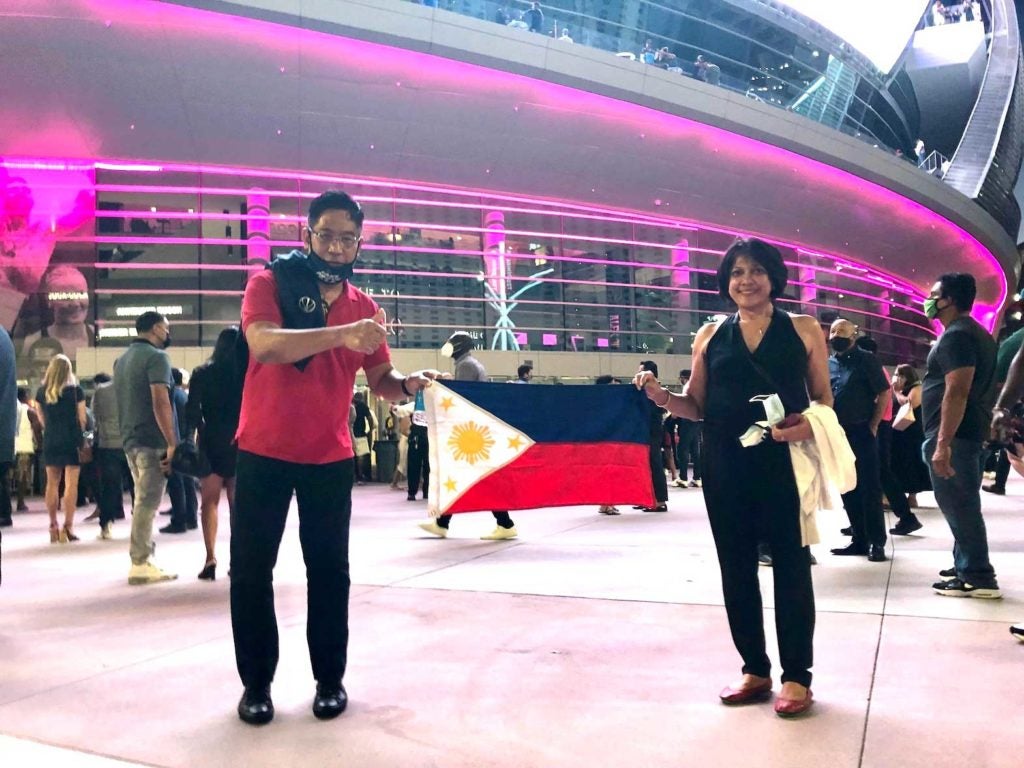 LAS VEGAS—When Manny Pacquiao wins, there is much jubilation among Filipinos. When he loses, diehard fans almost always fault the opponent. But last night at T-Mobile Arena, the mood shifted, perhaps for the first time in PacMan’s boxing career history. Filipino Americans paid little attention to his victorious Cuban opponent, choosing instead to praise the legendary boxer despite his defeat.

“Tonight, I saw a man who gave it all,” community leader Bing Cardenas-Branigin, who watched the fight on pay-per-view, told INQUIRER.net. “The warrior entered the ring not knowing his opponent. But as a real fighter, he was relentless in the fight, knowing that by giving it all and fighting a much younger and stronger opponent, he is going to achieve glory not only for himself but for his country.” Pacquiao was scheduled to fight welterweight world champion Errol Spence Jr. until the latter got injured two weeks before the match. Thirty-five year-old Yordenis Ugas from Cuba was the replacement.

“Tonight, Sen. Manny Pacquiao lost the fight, but he will never lose his place in boxing history,” said lawyer Dean Suba, legal consultant of Pacquiao in the United States. “He is a hall of famer and will remain a boxing icon not only in the Philippines but globally. He will always be remembered for his historical eight championship belts that’s never been achieved by any boxer around the world. He gave such honor to the Philippines, and his contribution to the sporting world is immeasurable. He leaves a legacy that will be treasured by many generations of Filipinos.” 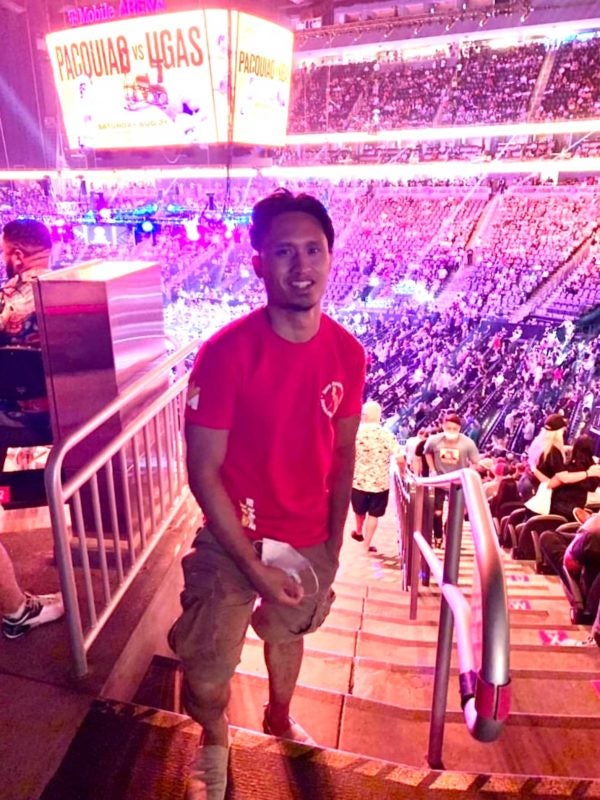 Pacquiao is a role model not only for aspiring Filipino boxers, but also to Filipinos in general, Suba added, noting the senator’s life journey from poverty to worldwide fame and his genuine philanthropy.

“He gave his best in his fight against Ugas but was unsuccessful, and he will continue to give his best to serve the Filipinos in whatever capacity he will be blessed to pursue,” Suba said.

At the T-Mobile Arena, everyone was rooting for Pacquiao. And those who saw how hard and unceasingly he fought never gave up on him.

“[I am] saddened to see a great champion lose,” said Mithi Aquino, wife of former U.S. Ambassador Harry Thomas, who was seated ringside. “He has a lion’s heart. He did not quit tonight, and we will never quit on him.”

Still, New York nurse and aspiring MMA fighter Adrian del Rosario blamed Ugas for his idol’s failure. “Manny fought well in the beginning, but then Ugas used his size and length to his advantage, and his right hand strikes were effective,” he said. “Manny didn’t move as much as he used to, but he stood and competed with a prime fighter, and that’s to be respected. He is an all-time-great who never backs down from a challenge.” 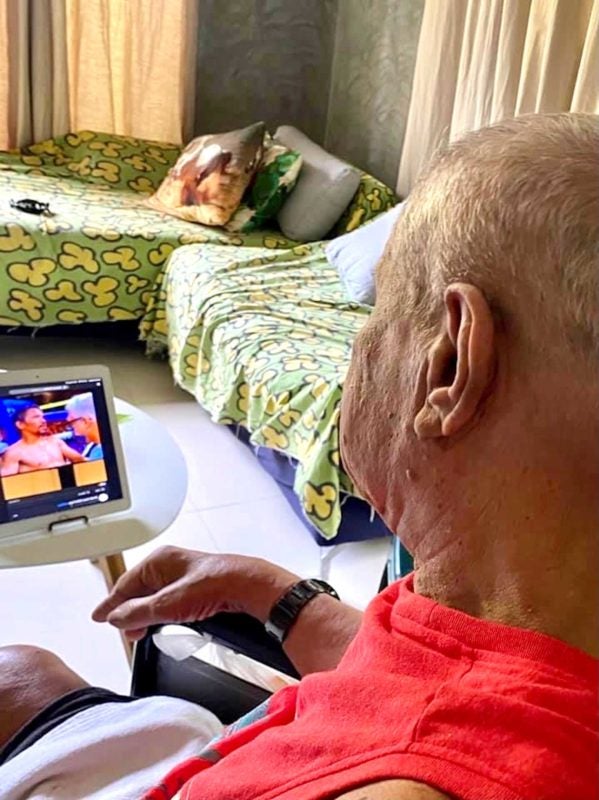 Meanwhile, Jaena Valles, who runs an accounting firm in New York, noted that the sudden change of opponent might have contributed to Pacquiao’s loss.

“In retrospect, it was in many ways forewarned,” she said in a comment on Facebook. “First his flight to the USA for his training was diverted back to the Philippines, for some reasons. Then a few weeks before the fight, Spence backed out and was replaced with Ugas. Pacquiao’s training is tailored to Spence’s manner of fighting, thus his preparation is not 100% meaningful. Then in the fight, he suffered cramping of feet, probably [due to] what he ate, drank or took before the fight or over [his] preparation for Spence.”

“So he shouldn’t accept anyone as replacement, instead request for reschedule until such time Spence can fight,” replied event producer Vince Gesmundo, who also flew in from New York to support Pacquiao.

For Indira Tubig, mother of two and one of Pacquiao’s avid fans in the Bay Area, the current pandemic and political woes in the Philippines might have taken a toll on the legendary boxer.

“In my opinion, there’s a lot of factors to consider in Manny’s loss at last night’s fight with Ugas,” she said. “First was the sudden withdrawal of Spence because we all know for a fact that athletes before they fight their opponent, the number one rule in sports is to study and analyze the weaknesses and strengths of their opponents. Considering this, Manny dedicated all his training skills to counter Spence’s boxing style. Second, is his being a senator in the Philippines.

“It is indeed a hard game knowing our political system, especially now that he is seeking a higher position in our country, but it is truly a tough game facing all the propaganda against him. The pandemic might too have [taken] a toll on him because I saw an unfocused Manny last night.

“Lastly, I think his age played a pivotal role too. Manny’s footwork, fighting stance and moves were a little rusty last night perhaps because of his inactivity in the boxing field for the last two years, which could have lowered his stamina. He was easily shaken by the younger Ugas’ punches. [Still,] it was a good fight, at least he was able to withstand the 12 rounds without being KO’d by Ugas.”

But to say that Pacquiao’s age was a huge factor in his loss to Ugas is unfair, according to talk show host Jessy Daing of “Over A Glass Or Two.”

“Manny wasn’t prepared at all to fight Ugas,” she said. “The commentator reiterated so many times that Manny’s age was one of the factors why his moves were slower. But in my opinion, Manny only had a few days of preparation after Errol Spence pulled out from the fight due to a detached retina.

“If Manny only had ample time to prepare and strategize against Ugas’ moves and fighting style, he could have won the fight. It was so obvious Manny had no solid game plan the moment the fight started. Plus, we heard Buboy [Fernandez, Pacquiao’s trainer] ask Manny if his legs were tight. Obviously, Ugas had been studying Manny’s moves for quite some time, so his strategic moves worked during the fight. Win or lose, Manny Pacquiao never failed all his fans around the world. He made us proud to be Filipinos and he will always be our champion.”

In the end, the fight against Ugas could be considered a defining moment in Pacquiao’s boxing career. Indira Segarra and friends among many Pinoy families who throw a watch party in San Francisco. INQUIRER/Elton Lugay

“Tonight’s fight is not even important to him as a boxer for belt or money,” stressed Branigin. “Manny, salamat for putting the Philippines on the map. Your contribution to the sport of boxing is historical in nature. When yg, for the country and for the people. You won, sir! Thank you for 20 years of giving us inspiration to be fighters.”

Ken Mendoza, president of Filipino American Basketball Association of Metropolitan DC, also praised Pacquiao for being “the only one who can bring so much energy and buzz in Las Vegas”.

“Manny doesn’t need to apologize to all his fans because he has done so much,” added Segarra.

“He has showcased to the entire world his great boxing techniques and awesome fights. He is a legend in the boxing field, as what our very good friend Dex Bennett said last night. To us Filipinos, he is and will always be our champion! Thank you so much, Manny, for the things you’ve done for our countrymen! May God bless you more always in whatever endeavors and your heart desires,” she said.