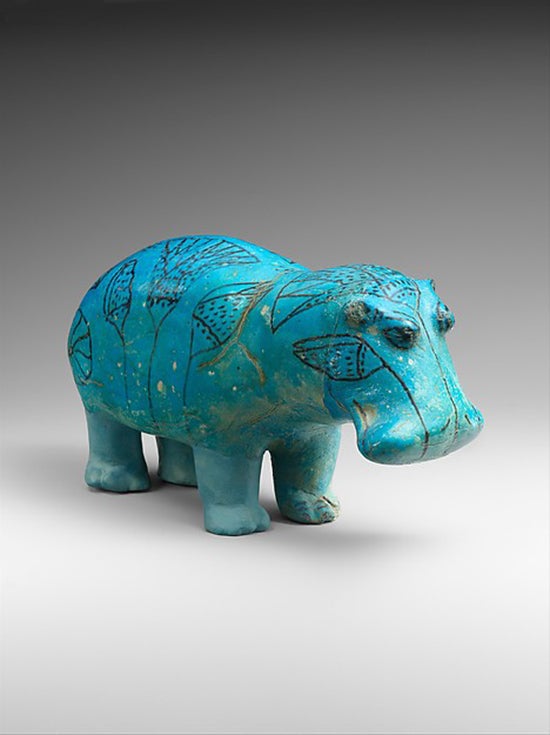 A small blue hippo that has become the unofficial mascot of the Metropolitan Museum of Art is being feted this week as the museum marks the 100th anniversary of its acquisition.

Nicknamed “William,” the hippo in question is an ancient Egyptian faience sculpture created in the Middle Kingdom (1961-1978 BC) and excavated in 1910. Such hippopotamus figurines were often placed in tombs, where it was thought they would supply the deceased with regenerative powers, according to the museum.

Like William, many of these hippos were painted with lotus flowers, making reference to their natural habitat and symbolizing rebirth.

Three of William’s legs have been restored after being broken, likely in antiquity and likely on purpose, due to an Egyptian belief that a depiction of a creature could come to life; in this case, potentially wreaking havoc.

William’s name has much more modern origins: the sculpture was acquired by the Met in 1917, and in 1931 a story in the British humor and satire magazine Punch told of a family who consulted a color print of the hippo, which they called “William,” as a sort of oracle. A Met publication reprinted the story, and the name stuck.

To celebrate 100 years since the acquisition of William, the museum is currently showing a small installation called “Conversation Between Two Hippos” that juxtaposes William with a 20th-century American glazed earthenware work by Carl Waters that it inspired, 4,000 years later.

In addition, a weekend of activities is planned for Nov. 17 to 19 in honor of William. Among them will be a series of 15-minute pop-up chats led by Met curators and conservators in various galleries and covering topics related to Ancient Egypt. The American Wing Café will feature a “William”-themed cookie, and a specialty cocktail will be available in his honor at the Great Hall Balcony Bar. JB