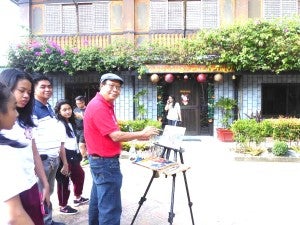 SAN FRANCISCO — Child prodigies are easily recognized nowadays. They are nurtured and properly guided by parents, psychologists and whoever discovered them. But it was not the same in the ‘50s, and most probably not in the Philippines. Yet, our “prodigies” have proved to the world that Filipino artists could hone their skills later in life and wherever they may be.

“I started sketching even before I went to school,” Maestro Rafael Maniago, 72, recalls, “but   my parents did not know anything about the arts. So my early works were either burned or thrown away.”

The Maestro was born in San Fernando, Pampanga, to working-class parents but is now based in Southern California. His early artistic talent remained undiscovered because for his family food on the table was more important than brushes and paints.

The making of a maestro

Maniago did not give up his art. He studied fine arts and commercial advertisement at the University of the East in Manila. After graduation, he set up an art gallery in front of his home in San Fernando, Pampanga. He also had a rattan furniture business in his garage.

“My paintings were selling fast. Most of these were decorative. Most of my clients were US Air Force servicemen from Clark Air Base,” Maniago says. 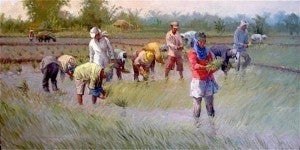 He also did canvas oil portraits mostly of politicians in every town in Pampanga. The Master is still the official portraitist of the presidents of Holy Angel University, all governors and most mayors in Pampanga.

Talent is not enough to become a maestro or expert in any field. Maniago experimented in all “isms” like realism, impressionism, abstractionism and surrealism. He studied the works of Amorsolo, Luna, Michelangelo, Da Vinci, Rembrandt and Rockwell among others. He also imitated the styles of the old masters, especially French Impressionists like Monet and Renoir as part of his experiments in various mediums like oil, acrylic, watercolor, charcoal and pastel.

Maniago also studied photorealism. He had a darkroom and studio where he developed his own films. He bought or traded various camera brands from Americans in Clark.

As an artist during the Martial Law years, Maniago fought Marcos through his arts. He did mural paintings against Marcos. His paintings on banners and boards were carried by the activists during protest rallies.

“As an artist, I felt the need to paint the reality in our society, like the workers and farmers who are the primary victims of oppression. I went to the villages to paint the sceneries and how the farmers toil every day. That is social realism. Later, many of my comrades were killed or just disappeared. Even my freedom to paint in the villages was halted because there were soldiers everywhere,” recalls Maniago.

For 20 years he sold over a thousand paintings and photographs in the Philippines until he decided to immigrate to the United States in 1988.

The Maestro in the United States

In California, Maniago worked in advertising, doing design and paintings on billboards. But when the digital and electronic billboards dominated the market he left the job. He worked part-time in Disneyland as a pastel portrait artist. During the first year, he worked for two to three days a week until it was reduced to once a week. It did not deter him from continuing his work; instead he persisted. After 14 years he mastered life portrait in pastel. Maniago studied at the Pasadena Art Center and attended various art workshops conducted by masters in the United States.

“Our well-known masters in the Philippines seldom share their knowledge. They did not even show how they painted. I don’t blame them. They have to protect their livelihood. So, I promised to myself that if I would ever gain such knowledge in painting, I would share it with my fellow artists and other aspiring artists,” he says.

In Los Angeles, plein-air painting, or on-the-spot landscape painting, is very popular. Maniago paints along the coastline. His paintings are often sold out though still unfinished. He sends the paintings by courier once he finishes them. His works are sold in art galleries and he also paints on commission basis. 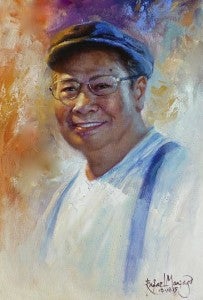 As a painter his biggest challenge is the commissioned portrait. Usually it takes more time to do the “retouch” than the actual painting where the client usually demands more because he or she pays. But for the maestro, “It is not the customer that is always right, but the artist.”

Maniago describes his earlier works as “colorful, simple, easy to understand that even a child can understand.” He describes his portrait as the true image of the person. He says he gives soul and feeling to the portrait through the eyes. His landscape paintings also depict everyday life in Pampanga, like farmers during the planting and harvest seasons as well as market vendors selling fruits and vegetables. His art now is more about being a Kapampangan and a Filipino, he says.

True to his words, the Maestro shares his knowledge. He conducts workshops in several states as well as in the Philippines. He is a member of various art groups including the Portrait Society of America, American Society of Portrait Artists, California Art Club and Laguna Plein Air Painter Association. He has also a hundred awards both from the Philippines and the United States for his work, including The Most Outstanding Kapampangan Award in the Arts Category.

Maestro Rafael Maniago has an ongoing one-man show at Nayong Pilipino Clark Expo entitled “Kalesa and Philippine Local Scenes,” which started last December 7 and will go on until February 2017.