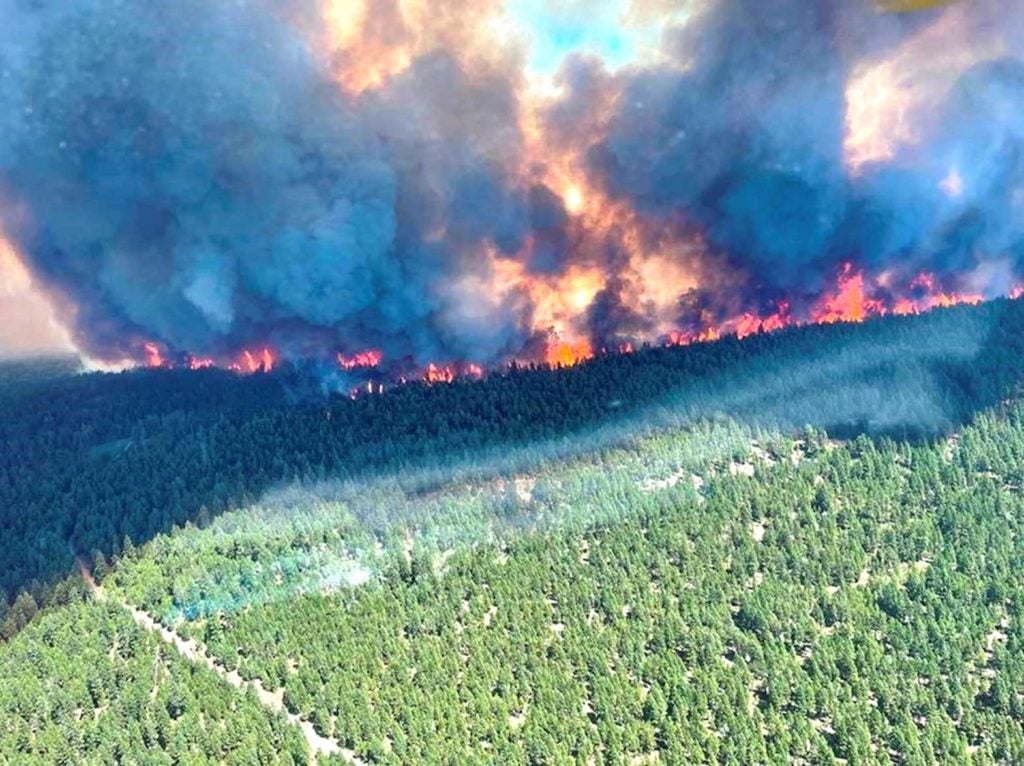 Smoke and flames are seen during the Sparks Lake wildfire at Thompson-Nicola Regional District, British Columbia, Canada, June 29, 2021, in this image obtained via social media. BC WILDFIRE SERVICE via REUTERS

RED DEER, Alberta – The ongoing wildfires in British Columbia, Canada have so far spared Filipino residents in this province.

Areas in B.C. interior have been battling wildfires fuelled by periodic heat waves that have hit this province since the start of summer. Lightning strikes triggered by persistent dry weather in these areas have been reported to light the fires.

Currently, there are some 270 wildfires raging in B.C. according to the province’s wildfire service, displacing some 6,000 properties on evacuation order and covering almost 680,000 hectares burned.

The Philippine Consulate in Vancouver has been monitoring the event closely but has not received any reports of Filipinos affected to date.

“The Consulate remains in touch with representatives of the Filipino community in the cities of Kamloops, Kelowna and Prince George, who have not reported any incidents so far,” said Arlene Magno, Deputy Consul General at the Consulate General of the Philippines in Vancouver in an interview.

“The Consulate will continue to monitor developments and remain in touch with our Filipino community contacts in the coming days and weeks.  We also stand ready to assist any Filipino adversely impacted by the wildfires,” added Magno

The Vancouver consulate is asking Filipinos in areas with threats of wildfires to be vigilant and follow evacuation alerts by local authorities.

Bong Camilo, a resident of Kamloops, B.C. and chair of the Filipino-Canadian Association of Kamloops, said his organization is closely monitoring the wildfire as some active blazes are in close proximity.

Camilo said his group has not received any reports of affected Filipinos.  He said there are some 800 Filipinos in Kamloops, mostly working in health care, hospitality industry and transportation.

“We are ready in case there are Filipinos who might seek help due to the fire,” he said.

Some s16 wildfires “of note” or those which are highly visible or may pose threats to the public, are being contained by the Kamloops Fire Center.

Filipino entrepreneur Bryan Discaya who owns a Filipino grocery store in Kelowna City, said the smoke from the ongoing fires has not dampened business. “It has been really smoky out here for weeks now. But we still have many customers coming into the store to buy groceries.

He owns the only Filipino store in this city, iShop Pinas on Harvey Avenue.

Meanwhile, the Vancouver Philippine Consulate’s hotline is 604-653-5858 for assistance to affected Filipinos. They can also be reached through their email, [email protected]. #

MOST READ
usa Common NFT Scams and How to Avoid Them
usa Texas school shooting victims: ‘They were just children with their whole lives ahead of them’
usa University of Hawaii names nursing school after PH-born nurse
usa Top 10 Electric Bikes to Fit Every Lifestyle
usa Toronto police shoot and kill man carrying gun near schools
usa MagSafe: Effortless and wireless charging for iPhones
usa Elon Musk Twitter Bid Restructured and Nearly Complete
DID YOU KNOW?
Top 10 Resorts in Jamaica that Will Make Your Trip Worthwhile
The 25 Best Co-Op Games You Should Play for PS4 in 2022
The Best Kindle of 2022: Which one should you buy?
A Beginner’s Guide to Buying a Vacuum Cleaner in 2022
Island Hopping in Tulum: The 12 Best All-Inclusive Tulum Resorts
How to Dispute a Debt and Win | Simple Tactics