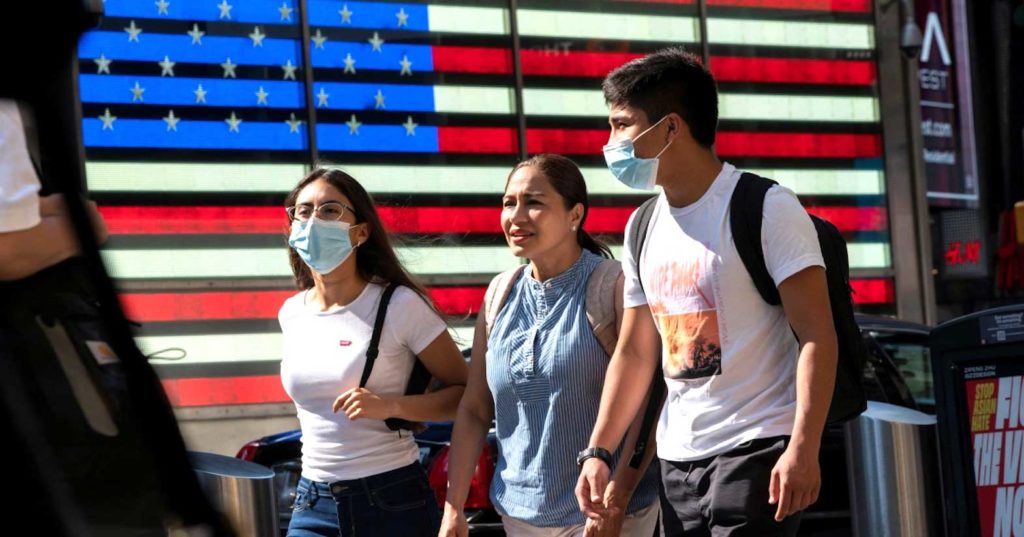 New census data show the US has become more diverse in the past decade [File: Eduardo Munoz: Reuters]

While white Americans are working on their tans this summer, the best news last week is that the country is “browning” on its own.

I have been waiting for this moment since I first heard of the phrase “diversity,” or the idea of “minorities becoming the majority” in the 1980s.

And now, according to the Census, we are here about eight years sooner than demographers expected. Our population is up by  24 million people to more than 331 million.

Whites are still 58 percent of the nation’s population. But whites are in decline by 2.6 percent, due to aging and low birth rates.

We are at the tipping point as Asians are up 36 percent; Hispanics, 23 percent; Blacks 6 percent.

Meanwhile, the multi-race category, what I like to call the “race, plus 1,” number more than tripled to 33.8 million from 9 million people in 2010,  making it the fastest growing group of all.

So it’s the browning of America.

Or the loving of America.

People are suspicious of the number because you are what you say you are on the Census. And maybe there’s just more people getting those DNA tests claiming white plus 1.

But it can also indicate increases in mixed race marriages and children. I know I contributed three.

When I first started talking to demographers about this in 2000 on my television show, New California Media (later New America Media),  they noted that when young people start showing a love interest in one another, we would, as the song says, “come together” as a country.

More than 20 years later, I’m astonished at how naïve I was to think that the embrace of diversity would be so loving.

Young people have, yes. But the overall picture of a new America to another segment of our country seems to only fan xenophobic fears and create division.

It didn’t have to be this way, but discrimination dies hard in America.

I thought in 2016, the GOP had come to its senses when it published a full blueprint of a big tent diversity strategy. Everyone was on board.

And then Trump came down that escalator and started his campaign. Love turned to fear, and the GOP couldn’t shred that diversity document fast enough as Trump became the figurehead of the party.

That was the Faustian deal the GOP made, and it has forged a resistance to diversity that has led a not so subtle push to  roll back the last 50 years of our movement for equality.

As America becomes more diverse, the Republican response has been to shape a society that limits democracy, like the opportunity to vote.

That’s the best the GOP can do—to resist and deny. Sound familiar?

First climate, then Covid, and now the Census.

Watch for repudiation of the new Census numbers to become the expression of outright “Diversity Denial.”

So while I celebrate the numbers, people like me are being accused of celebrating the “extinction of white people,” as Fox’s Tucker Carlson put it on his show on Friday.

Considering the amount of make-up he wears on his show, he should be more open to the browning of America.

No one is celebrating the demise of white people. Or hate. Diversity isn’t about extinction. It’s merely observing the change in our country.

A 36 percent increase in Asians Americans is a celebratory milestone in the evolution of diversity in this country.

But I’m dismayed that there are folks who don’t like this natural shift and want to see America go back to the demographics of the 1950s. All white? How you going to do that?  Sell whitening cream?

Or start white baby farms in the South, pumped up with fertility drugs.

We’ll see whether anti-diversity forces can manipulate the numbers in the gerrymandering to come. We may see new districts resemble new amoebic shapes to get the results pols want.

But there are also other ways folks can wreak havoc on our democracy.

The recall effort on Gavin Newsom in California is a big part of that.

Newsom started  his “No on Recall” campaign in earnest this past weekend (Aug. 13). A “no” vote would retain Newsom. One LA Times poll shows that 47 percent want the recall vs 50 percent who say no.

That’s way too close with a month to go before the Sept. 14th election. Despite California’s large Democratic base, an off-year election and voter apathy may be enough to sink the governor.

I knew Newsom when he was mayor of San Francisco. We’re not “friends,” but we’re professional acquaintances. I know he’s shown up for the AAPI community in the past. I last saw him in person more than four years ago at the funeral mass of Alice Bulos, whom I call the “godmother of AAPI politics” in the Bay Area.

This week, Newsom had a special AAPI news conference, where I asked him if he could win without the AAPI vote.

His answer: “No, I can’t win this without your collective support, the community’s support.”

His full answer is here. He talks about going to Chinatown the day after his election as mayor to thank the community. I follow up asking him about the 30 percent AAPI vote that is Republican and Trumpy. What would he say to them? Listen here.

Newsom was introduced by Filipino American Rob Bonta, whom Newsom appointed as California’s Attorney General this year. Bonta called the election a “cynical Republican recall effort,” an attempt to install a Trump supporter. At this point, it’s an ultra-right wing African American talk show host named Larry Elder, who is leading a roster of candidates to replace Newsom. Elder has spread anti-vaccine disinformation and has been viewed as worse than Trump himself. He doesn’t believe in a minimum wage or a woman’s right to an abortion. He’s a provocateur. He should not be the chief executive of California.

But would it be fair that someone like Elder in a recall election could become governor of the world’s fifth largest economy with a mere plurality–and not a majority of the state’s voters?

To replace Newsom, who three years ago won the state with 62 percent of the vote?

Legal scholars have argued that the recall effort, which in one day could fire and replace Newsom, is anti-democratic and subject to legal challenge.

But that gets back to why Republicans want it all done now.

During the news zoom call, Newsom pointed to all the good he’s done leading California to a budget surplus and a thriving economy despite the pandemic.

But when it comes to why the recall is happening, it boils down to one thing: Republicans are bent on what I call the “January Sixing” California.

So what if Newsom is doing well by the state or that he was elected in a landslide three years ago?

The GOP’s motivation to undo California is a response to the great diversity of this state, the most Asian American in the nation. Instead of embracing diversity, the GOP wants to embrace division.

Newsom acknowledged that in his opening statement.

“The answer to why this recall is on the ballot is connected to the issue of our diversity,” Newsom said. “This is the state, where 27 percent of us are foreign born. We’re a majority/minority state. We’re the most diverse state in the world’s most diverse democracy, that’s our greatness. That’s our strength. We celebrate, we don’t tolerate that diversity.”

Yes, diversity. And Filipino Americans, more than 4 million of us in the U.S. , are all a part of that.

The ballots will be mailed to California voters beginning on Aug. 16th.

If you voted in the November 2020 election, you are already registered.

Otherwise, you have until August 30th to register.

It should be simple to mark your ballot and mail it in. No stamp necessary.

I like to drop off my ballot masked up at the registrar’s office.

However you like to do it, just do it. This Sept. 14 vote is special.

Considering the real consequences, it would not be hyperbolic to say this could be the single most important election for Filipino American voters in California, maybe ever.

It’s not about Newsom so much as it is about the brazen attempt to negate an election won by a landslide in 2018. If the recall wins, the Republicans will have stolen the highest office in California with a mere plurality.

That shouldn’t happen in a thriving democracy.

Emil Guillermo is a journalist and commentator. He writes a column for the Inquirer.net’s North American Bureau. He vlogs at www.amok.com and on Facebook Live @emilguillermo.media at 2p Pacific M-F.

View comments
TAGS: diversity, US Census, US demographics, US population