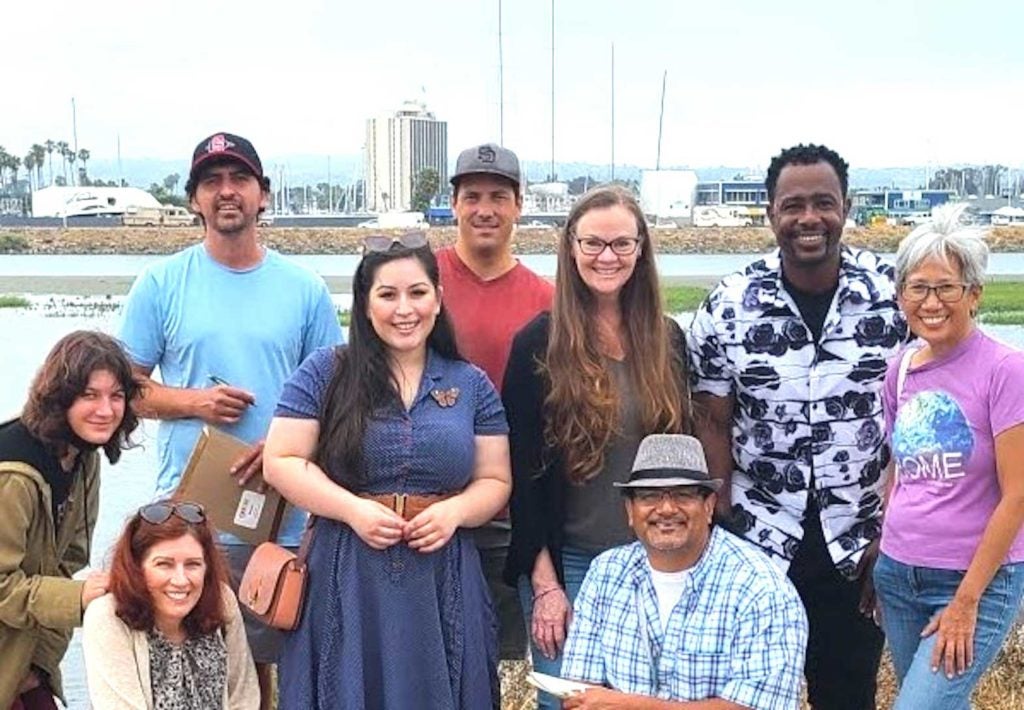 Upon registering for “The TAG Project,” audience members will receive a Welcome Letter with a Mystery Object in the mail. Prior to the performance, dates, maps and interviews will be released throughout August.

The production features short video plays set beside the mouth of the San Diego River as it meets Ocean Beach. Audience members may opt to visit the site and watch the plays on mobile devices.

Audience members will be encouraged to share their own nature stories through social media comments, photos, videos, and even their own plays.

The production is presented by Playwrights Project, a theater education nonprofit.  Other Filipino Americans involved in the production include voice actor Taylor Wycoff and actor Ali Nelson.

“I’ve lived in San Diego most of my life but I had never spent time at the estuary,” says De Castro. “I ended up stuck there because my son is a surfer and I was his ride. As I killed time while he surfed, I walked and discovered the mouth of the San Diego River.

“It’s been a long pandemic and he surfs a lot, so I’ve been able to visit the estuary over many seasons. The water fluctuates with the tides and time of year … It’s an area of transience for people and wildlife. Some people live there illegally in RVs or vans. Others travel through. It’s a fascinating place.”

De Castro is currently a Teaching Artist at Donovan State Prison for Playwrights Project. She has been a dramaturg for Plays by Young Writers Festival. Credits with Filipino American elements include “Rain Forest” (suicide prevention play in Filipinx community), “The Fire in Me: A Theatrical Exploration of Domestic Violence in San Diego’s Filipino community,” and “Halo-Halo-Mixed Together Stories from San Diego’s Filipino American Community.”

In “Blank Tags,” Osprey shares a story of longing and belonging about his old yellow cat. In “Tree Tag Part One,” a stressed-out soccer mom seeks solace from a tree.  In “The Tree,” a tree talks about choreographing the dance of the estuary. In “Tree Tag Part Two,” a traveler and her dog find sustenance and comfort from the tree.

The August 24 performance, titled “You’re It!,” will feature the short plays of five other playwrights. Talkback sessions will follow each performance.

De Castro developed the idea for this production from workshops and classes she has been taking with different artists.

The format of the production was from a prompt to find new ways to deliver stories from a workshop on non-traditional theater.

The theme of nature was inspired from Sarah Greenman’s Creative Alchemy Cycle, a workshop revolving around the seasons and nature. “During the pandemic … many people focused on creative pursuits and were able to spend more time in nature and realize its importance to our health. I’m particularly interested in the barriers to engaging with nature that people of color experience.”

The idea for incorporating mystery objects into the production sprung from her own experiences in the workshop. “We received seasonal bundles. It’s as fun as it sounds! Honey, dried apples, pinecones, flowers, and other ephemera.”

De Castro wanted to help give audiences the “props” to piece the elements together. “The TAG Project is about the details. It asks people to stop and pay attention. Here’s a letter. Here’s a Mystery Object. What does it mean?

“The estuary is a very overlooked area, but if you stop and look around, there is beauty. I could tell people about the estuary, but if I connect them to it through a story that takes place there, they’re drawn in.”

This program is made possible by The William Male Foundation, a Rising Arts Leaders of San Diego Virgil Yalong Quick Grant, the California Arts Council, and the City of San Diego Commission for Arts & Culture. Visit Playwrightsproject.org.