US nursing shortage may again spur recruitment from PH

US nursing shortage may again spur recruitment from PH 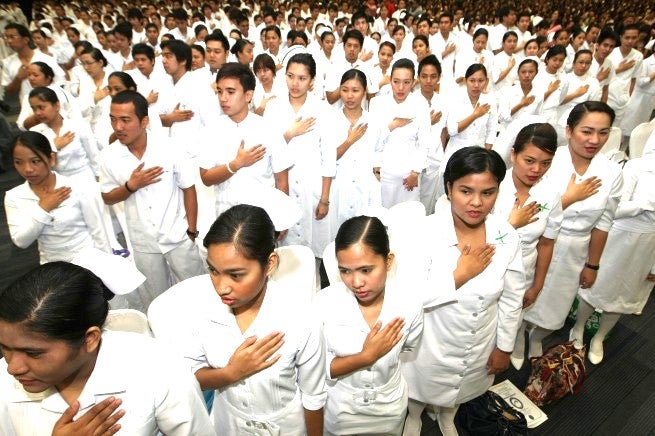 LOS ANGELES — A The New York Times editorial in 1956 warned that “The nationwide shortage of nurses is likely to reach crisis proportions.”  Now over six decades later, the shortage again seems far from being resolved due to a rising elderly population, a large number of retiring nurses and the challenge to recruit new ones.

With over three million registered nurses (RNs), and over 800,000 licensed practical nurses (LPNs) in the United States, nursing is said to be among the nation’s fastest-growing occupations.

According to the Bureau of Labor Statistics, the employment of registered nurses is expected to see a growth of 15 percent from 2016 to 2026, a growth the bureau says is “much faster than the average for all occupations.”

The current outlook, though, has many worried that the supply of registered nurses won’t even be able to keep up with the demand.

At the forefront of issues driving the shortage are Baby Boomers.  Once spiking in births between 1946 and 1964, the baby boomer generation is again showing a significant rise in numbers of those entering retirement.

The bureau also found in 2010 that the 65 and older population in the U.S., who had a growth increase of 15.1 percent, grew at a faster rate than the whole U.S. population which grew at 9.7 percent.

These numbers are especially alarming to the healthcare industry as it prepares to provide care to the growing demographic.

Patients aren’t the only ones aging.  Many current U.S. registered nurses are reaching retirement age as well, and are in turn leaving behind many job vacancies.

Statistics by the American Nurses Association (ANA) projected that an estimated 690,000 nurses will leave the workforce through 2024, resulting in a net nurse vacancy of around 1.2 million.

In a survey of over 130 healthcare facilities from 29 states, nurse recruitment and retention firm NSI Nursing Solutions Inc., found that facilities have been experiencing increasing vacancy rates since 2013.

It doesn’t help that the recruitment of new RNs has been challenging.  The average time to recruit an RN ranges from 55 to 119 days, depending on specialty.  The longer a vacancy remains open, the more quality of care becomes an issue — fewer nurses usually means higher patient loads.

A report by Reuters that interviewed more than 20 hospitals including some of the largest chains, said that many hospitals have resorted to spending billions of dollars collectively in recruiting and retaining nurses to avoid risking patient safety or closing down departments.

Many hospitals, especially those in regions where the demand for nurses can be exceptionally dire, further shelled out money for temporary nurses and travel nurses whose assignments typically range from 13 to 26 weeks.

Global advisor on staffing and workforce solutions Staffing Industry Analysts, found that the cost for travel nurses in 2017 almost doubled over three years to $4.8 billion.

Foreign nurses often provide relief.  A June 2016 report by the Institute for Immigration Research at George Mason University and the Immigrant Learning Center, found that foreign-born nurses made up 15 percent of registered nurses in the U.S.

The Philippines has long been a source of nurses since the country’s colonization by the U.S., as noted by Catherine Ceniza Choy, professor of Asian American and Asian Diaspora Studies at the University of California Berkeley, in her book “Empire of Care: Nursing and Migration in Filipino American History”.

Filipino nurses first arrived in large numbers through The Pensionado Act of 1903, which allowed pensionados (government sponsored scholars) to study in the U.S. through a government subsidized scholarship.   Nursing students either stayed in the U.S to work, or returned to the Philippines where they helped establish nursing schools.  Many graduates who would again immigrate to the U.S. to work.

In 1928, the Philippine Nurses Association of New York was founded — Its first president, Marta Ubana, completed her B.S. in Nursing at Teachers College, Columbia University.

More nurses came in 1948 through the United States Information and Educational Exchange Act of 1948, also known as the Smith-Mundt Act, which allowed interchanges of students, trainees, teachers, guest instructors, professors, and leaders “in fields of specialized knowledge or skill” between the U.S. and other countries.

By 1961, the Philippine Nurses Association of Northern California was created just a few years before many nurses again came to the U.S. in numbers as a result of relaxed immigration laws.

Since then, many Filipinos have continued to take the National Council Licensure Examination (NCLEX), or complete Commission on Graduates of Foreign Nursing Schools (CGFNS) qualifications in hopes of working in the U.S.

By 2007, the number of Philippine-educated nurses in the U.S. reached its peak and accounted for more than 30 percent of the U.S. foreign-educated nurses, according to a study by Health Services Research.

Yet as soon as the wave crested, it was followed by a drastic decrease in the following years.

The decrease may have been attributed to the U.S.’ own attempt at churning out nurses.  According to the National Council of State Boards of Nursing (NCSBN), close to a million nurses graduated from U.S. nursing schools from 2006 and 2011.

But in light of the current shortage situation, foreign-sourced nurses may once again be needed to provide relief.