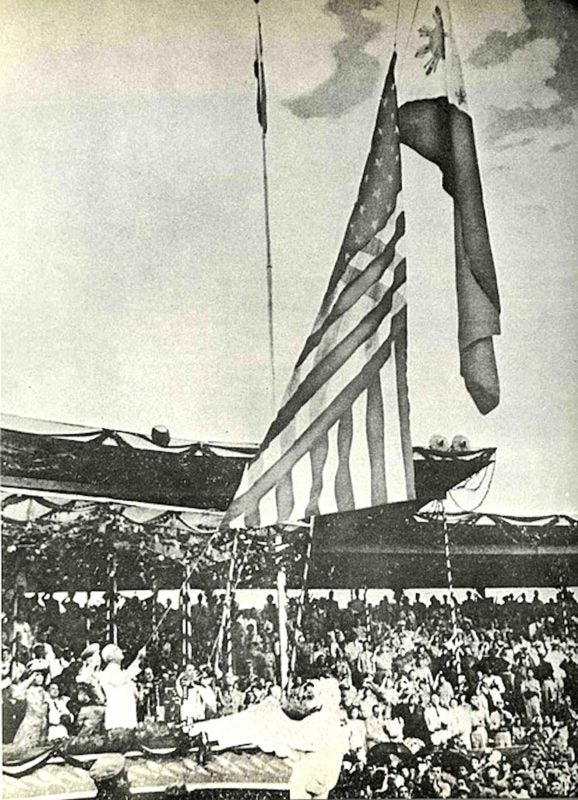 The Flag of the United States is lowered while the Flag of the Philippines is being raised during independence ceremonies, July 4, 1946.

NEW YORK—Two hundred and forty five years have gone by since the North American colonies formally declared their independence from Great Britain and mad King George. While the colonial ties were cut, not all those subject to the new nation, the United States of America, had their freedom.

Not the enslaved African Americans. Not for them the “unalienable rights to… Life, Liberty, and the pursuit of Happiness.” It would take the 1863 Emancipation Proclamation, and the end of the ensuing civil war on April 9, 1865, for the slaves to be officially freed. In Texas the slaves found out they were free only two months after, on June 19, 1865—otherwise known as Juneteenth, recently made into a federal holiday.

Frederick Douglass pointed to America’s hypocrisy in 1852, declaring, “What, to the slave, is the Fourth of July?” He noted, “What have I, or those I represent, to do with your national independence. I am not included within the pale of this glorious anniversary! Your high independence only reveals the immeasurable distance between us. This Fourth of July is yours, not mine.”

Ironically, the lyricist of “The Star-Spangled Banner.” Francis Scott Key, was the scion of a plantation-owning family in Maryland. The original lyrics included this verse, since omitted post-Civil War: “No refuge could save the hireling and slave/from the terror of flight or the gloom of the grave.”

Nor were the Native Americans deemed to have those “unalienable rights.” How the different nations who had been living for centuries in the so-called New World were treated by the white European settlers is utterly shameful, with implications of genocidal intent, including the eradication or diminution of cultures. The history of the interaction between Native Americans and the white settlers is rife with massacres, forced relocation, expropriation of land and resources, and continually broken treaties.

In 1492, the year of Columbus’s landfall, the population of Native Americans was an estimated 10 million. A combination of diseases brought over by the settlers, wars against the different tribes, displacement from their homelands, and violence reduced that number to a little less than 300,000 by 1900. The popular saying, “The only good Indian is a dead Indian,” seems to have been the prevalent and fatal genocidal principle behind acts, official and unofficial, that nearly wiped out the original inhabitants of the United States.

Just recently, more than a thousand unmarked graves of children of the First Nations—the official reference used in Canada—were discovered in our neighbor to the north. These unheralded dead were among at least 150,000 children forced to enroll in schools run by the Catholic Church, so they could be remade in the white man’s image. These grim unearthings, literal and otherwise, have sparked widespread anger, with some churches being set on fire.

July 4th was also the date chosen by the United States to formally relinquish its colonial rule over the Commonwealth of the Philippines in 1946, handing over the reins of government to President Manuel Roxas, a little less than a year after Japan surrendered to the Allies, ending the Pacific War. This of course was a deliberate snub of the revolutionary Philippine government’s declaration of independence on June 12, 1898, with President Emilio Aguinaldo presiding over formal ceremonies in Kawit, Cavite. Commodore George Dewey, head of the American Asiatic fleet that had wiped out the Spanish Navy in Manila Bay on May 1, 1898, had been invited but he declined. Not surprisingly, at the behest of Washington he was surreptitiously planning a takeover of the erstwhile Spanish colony, and awaited the arrival of additional US troops.

That planned takeover became a reality when, in the 1898 Treaty of Paris, Spain agreed to relinquish its colonial rule over the archipelago (and Cuba and Porto Rico) for $20 million, paving the way for the US’s immoral occupation of the country and half a century of exploitation of its resources and labor.

It was only in 1962 did then President Diosdado Macapagal issue a decree changing the date to June 12. Needless to say, Aguinaldo, by then a nonagenarian, was happy to see the change. July 4 was still a national holiday, but now referred to as Republic Day. During the martial law regime of the dictator Ferdinand Marcos, the designation was changed to Philippine-American Friendship Day, a working holiday. President Corazon Aquino did away with this altogether, but President Fidel V. Ramos restored it on the occasion of the handover’s 50th anniversary.

Anyone who thinks racism is a dead issue, that as a topic, i.e., critical race theory, it shouldn’t even be taught, is likely to live in a world cocooned by white privilege. Maya Angelou had the perfect reply and antidote to the venom of racism in her powerful poem “Still I Rise.” It continues to pack a punch and instill fearlessness and hope in us:

You may write me down in history

With your bitter, twisted lies,

You may trod me in the very dirt

Does my sassiness upset you?

Why are you beset with gloom?

Pumping in my living room.

With the certainty of tides,

Did you want to see me broken?

Weakened by my soulful cries?

Does my haughtiness offend you?

Don’t you take it awful hard

Diggin’ in my own backyard.

You may shoot me with your words,

You may cut me with your eyes,

You may kill me with your hatefulness,

Does my sexiness upset you?

Does it come as a surprise

At the meeting of my thighs?

Out of the huts of history’s shame

Up from a past that’s rooted in pain

Welling and swelling I bear in the tide.

Leaving behind nights of terror and fear

Into a daybreak that’s wondrously clear

Bringing the gifts that my ancestors gave,

I am the dream and the hope of the slave.