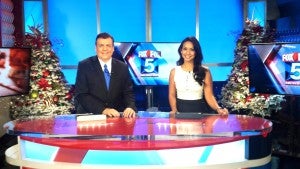 SAN DIEGO, California — She’s practically done it all in the newsroom in the last seven years, starting as a production assistant intern to becoming writer turned producer. At times she even filled in on the assignment desk.

Philippine-born Kristina Audencial has now become one of the widely recognized primetime anchors in the eighth-largest city in the United States and second largest in California. She joined the major anchors of KSWB Fox 5 News starting October 10.

Audencial is proud that there is now a growing number of Filipino American journalists, photojournalists and producers in her city, home to almost 200,000 of her compatriots many of whom are from US Navy families. “One of Fox 5’s reporters/anchors, Maria Arcega-Dunn, is half Filipina,” reports Audencial.

“Our morning show has always done incredibly well in San Diego. Adding two anchor teams to divvy up the 5.5 hours of news in the morning brings renewed energy and a different look to keep the news fresh.”

She told INQUIRER.net that her rise to a visible role to news casting was hard-fought.

“On air, I started as a one-man-band. I shot, edited, wrote and produced my own pieces.   Eventually I became the female night side reporter at Fox 5 in San Diego, reporting on breaking news and was heavily focused on the crime beat.

“Every now and then, management would have me fill-in as an anchor in all shows, ranging from the early morning newscasts to the prime time hours.”

She took a two-year break from news and gave financial services a shot at one point. She climbed the ladder in that role quickly and was part of the management team within a year. But she realized “something was missing” and decided to return to journalism.

Kristina added: “Members of management also recognized the hard work I’ve put in as a reporter and fill-in anchor over the years. I have always loved my job and couldn’t wait to hit the ground running, especially during breaking news, when others might have shied away from the task.”

On her newscasts, Kristina stands out with her infectious smile and laughter that have earned her endearing comments from viewers. Many have described her as “authentic and genuine on air.”

“I take pride in that. Anyone who has ever been to the Philippines knows our kababayans are incredibly genuine souls. Despite their hardships, their smiles will light up a room,” the anchor told INQUIRER.net. 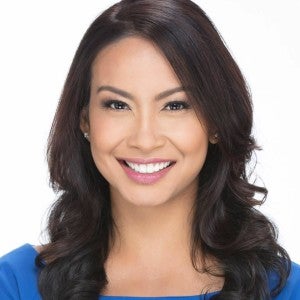 She said one memorable news feature she did was when she interviewed former President Fidel Ramos who visited San Diego last year.   “He introduced himself as ‘Manny Pacquiao’ and proceeded to ‘knock out’ our photographer!”

In 2013 her then-station UT-TV flew her to Eastern Samar to cover the damage brought by typhoon Yolanda (Haiyan). Upon her return she emceed a community benefit show for Typhoon Haiyan victims at the Moonshine flats in San Diego.

She proudly describes herself as a “third culture” kid, having lived overseas most of her life including Japan, Singapore and Guam due to her father’s military assignments.

“After graduating high school in Singapore, I earned my bachelor’s degree in Communication from the University of California in San Diego.

Her father, Rico Audencial, a naval officer who hails from Pasig, met her mother, Jennifer, of Antipolo, Rizal, when they were both in Yokosuka, Japan. Kristina was born the eldest of three siblings in Subic Bay, Olongapo.

Kristina relishes her new role as an anchor and carrying a large responsibility to teach and mentor the future generation of journalists in the broadcast field.

An aspiring broadcaster or journalist needs to include four key points in their book of musts in order to succeed, according to Kristina: hustle; never give up; never stop being curious; stay grounded. 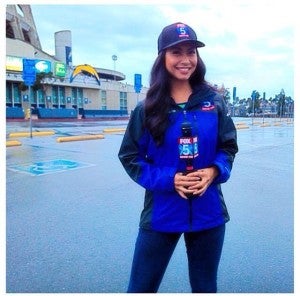 “By hustle, I mean work hard every single minute of the day. Working doesn’t end in the newsroom. It means keeping up on current events. With social media outlets like Twitter and Facebook, it’s not difficult to keep up with what’s happening or trending in the world today.

“Never give up. This business is not for the weak-hearted or weary. You will get tired. You will get knocked down. You will make mistakes. But if you don’t have a thick skin, you will not last. Stay open-minded and keep pushing toward your goal.

“Never stop being curious. Always ask questions. Tell your stories with heart. People can always tell if you’re not honest or if your heart isn’t in it.

“Stay grounded because it’s easy to get swept up in the hustle and bustle of the business. Work hard with great focus, and allow yourself to learn and improve. Keep an open mind and be willing to laugh at yourself.”

Kristina values her work as an anchor because it allows her to put the skills she’s learned over the years as a producer and reporter to work.

The statuesque anchor said she finds it most rewarding to “showcase my Filipino heritage on this incredibly visual platform.”

“San Diego has the second largest Filipino American community in the U.S. and it’s an absolute privilege to represent them in this role. As is common in our culture, I’ve worked tirelessly for my parents, my sister and brother: to bring pride to the family.”

She’d love to do more stories of survival. “I think they teach us how to live in the now. They remind us that life is often too short and spending time being ungrateful is no way to live. News doesn’t always have to bleed. Inspiring stories that provoke emotion are just as important to tell.”

Also, she said, “I would love to interview the Dalai Lama.”