For the second consecutive year, the lingering pandemic consigned New York’s annual Pride march to the virtual world on Sunday, even as its alter-ego, the Queer Liberation March, took its edgier message through the streets of Manhattan.

The NYC Pride march, the city’s marquee LGBTQ+ event now in its 51st year, became a made-for-TV production as a cautionary measure to prevent coronavirus infections, which have dropped sharply as the number of people vaccinated has grown.

Only a small number of guests were invited to the group’s three-block areas where floats and musical acts paraded for the cameras, but organizer Sue Doster said “something in the millions” of viewers were expected to tune in.

Guests included Brandon Wolf, a survivor of the June 2016 mass shooting at the Pulse, a gay nightclub in Orlando, Florida, who has since become an advocate for LGBTQ rights legislation.

“Six days after the shooting, we had a funeral service for my best friend and I made a promise to him that day that I would never stop fighting for a world that he would be proud of,” he told ABC, which aired the event. 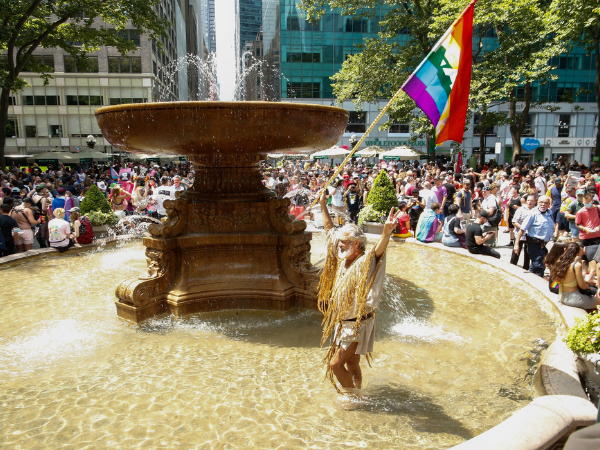 “We’ve made incredible progress in equality across the country, but trans people are under attack,” he added.

HIV/AIDS expert Dr Demetre Daskalakis, one of the event’s grand marshals, urged all LGBTQ+ community members to get tested frequently for the virus.

“At the end of the day, HIV is just a virus, and we have the ability to prevent it and to treat it,” said Daskalakis, who is director of the Division of HIV/AIDS Prevention at the Centers for Disease Control and Prevention.

MARCHING FOR LIBERATION AND JUSTICE

Meanwhile, thousands of people organized by the Reclaim Pride Coalition, whose parade began as a protest to the Pride march two years ago, marched more than 30 blocks down New York’s Seventh Avenue with rainbow flags and signs that included “Liberation and Justice.”

Coalition cofounder Jay W. Walker said the group was hoping to draw up to 70,000 marchers. 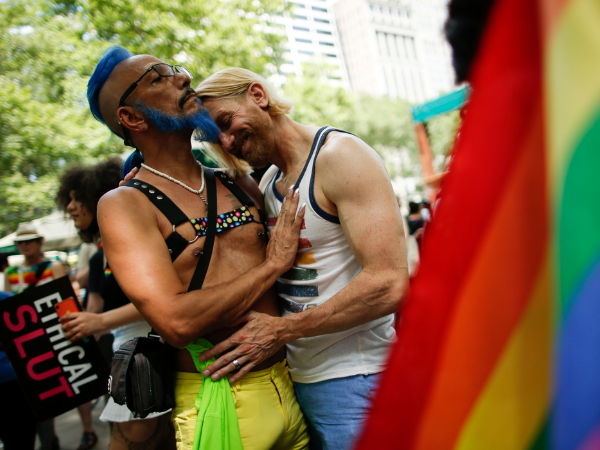 Under sunny skies with muggy conditions that felt like 90 degrees Fahrenheit (32 degrees Celsius), a racially mixed crowd of men and women chanted “No Justice, No Peace,” and other slogans, some critical of the New York Police Department.

After linking last year’s message to the Black Lives Matter movement, Walker said this year’s theme is returning to the coalition’s standard: “None of us are free until all of us are free.”

Although the group had urged marchers to wear masks, few did. Last year’s march produced no discernable spike in new coronavirus cases, he said.

Both events commemorate the June 28, 1969, uprising at the Stonewall Inn, a gay bar in Manhattan’s Greenwich Village, when patrons fought back during a police raid. The defiant stand gave birth to the modern LGBTQ rights movement.

The two groups have differed over their policies on police participation in their events, which the Reclaim Pride Coalition opposes. But Heritage of Pride last month also decided to bar uniformed police officers from its future parades. Doster said many of its Black, brown and trans members feel threatened by their presence.