SF orchestra-chorus to open season with tribute to Mexico

SF orchestra-chorus to open season with tribute to Mexico 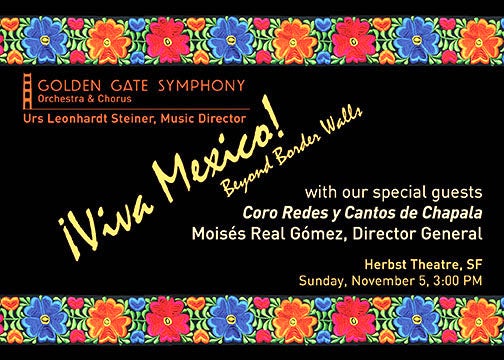 Featuring special guest conductor Martha Rodriguez-Salazar and a variety of special guests from Mexico and the Bay Area, ¡Viva Mexico! Beyond Border Walls will take place at the Herbst Theatre, 410 Van Ness Ave. in San Francisco. To purchase tickets, visit: www.cityboxoffice.com/ggsoc or call 415-392-4400.

“The Golden Gate Symphony Orchestra & Chorus invites Bay Area residents to support and celebrate our Latino neighbors with music that connects and elevates us beyond President Trump’s divisive call for a border wall,” said Maestro Steiner. “¡Viva Mexico! Beyond Border Walls will be a dazzlingly eclectic concert, with musical selections that range from Aaron Copland’s El Salón México to José Pablo Moncayo’s Huapango, as well as traditional folksongs and contemporary compositions from Bay Area musicians and soloists.”

Topping off the program, special guest chorus, Coro Redes y Cantos de Chapala, will arrive direct from the State of Jalisco, Mexico. The renowned chorus, led by Director General Moisés Real Gómez, will perform its signature mix of ballads and historic folksongs that have been performed across Mexico since earliest colonial times. The program for “¡Viva Mexico! Beyond Border Walls will also include:

Featured soloists will include local vocal talent: Alicia Naylor Guerrero, High Mezzo-Soprano, a freshman at the Ruth Asawa San Francisco School of the Arts; Zahra Rothschild, Mezzo-Soprano, a senior at Lowell High School in San Francisco; Joel Ponce, Tenor, a 23-year-old who earned a degree in Music Theory from Whitman College in Walla Walla, Washington, where he wrote about mestizaje and the music of Gabriela Lena Frank for his senior thesis; and Gaspard Mbole, Baritone, a member and Assistant Choral Director of GGSOC.

With a mission to reach out to the diverse ethnic communities of the Bay Area and beyond, Maestro Steiner and the GGSOC have been at the forefront of connecting the Latino, Asian, Filipino and African-American communities in the Bay Area with classical music since 1989. GGSOC is also known for showcasing the talents of artists from their respective countries.

“Last season, we reached out to the Chinese community in order to learn and perform in Mandarin the epic Ask the Sky and the Earth by Hong Kong composer, Tony Wok,” said Maestro Steiner. “¡Viva Mexico! Beyond Border Walls continues our proud tradition of performing socially relevant music that informs, inspires, and connects us all.”