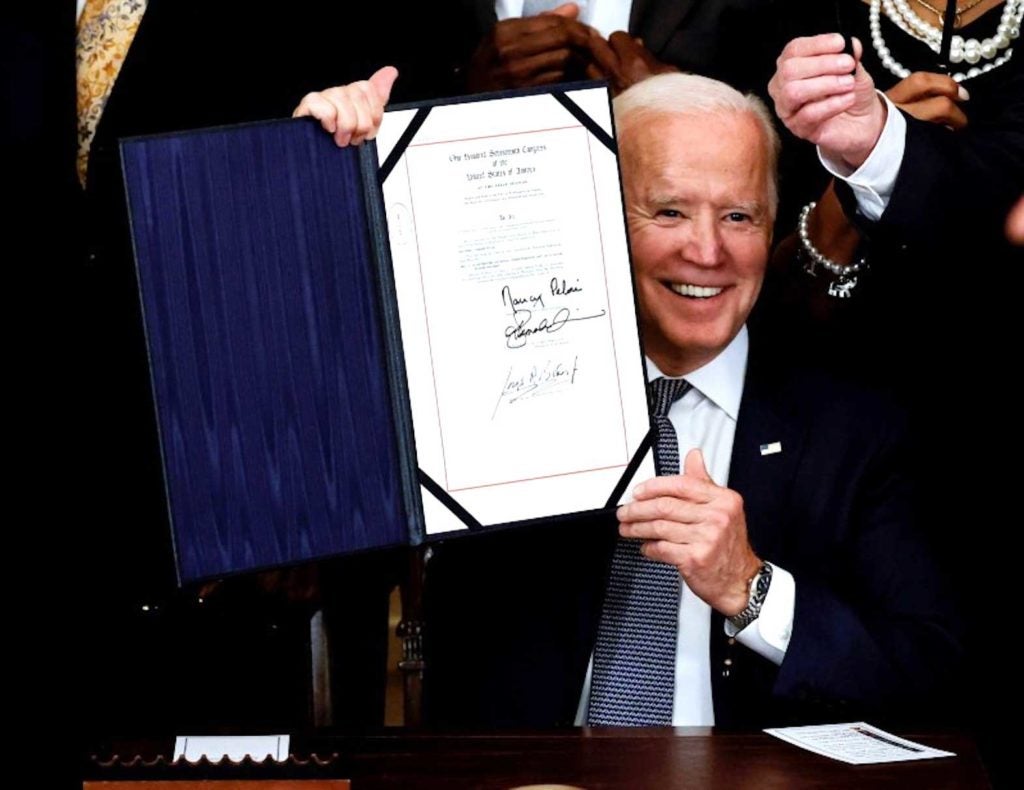 U.S. President Joe Biden is applauded as he holds the Juneteenth National Independence Day Act during a signing ceremony in the East Room of the White House in Washington, U.S., June 17, 2021. REUTERS/Carlos Barria

The bill, which was passed overwhelmingly by the U.S. House of Representatives on Wednesday after clearing the Senate unanimously, marks the day in 1865 when a Union general informed a group of enslaved people in Texas that they had been made free two years earlier by President Abraham Lincoln’s Emancipation Proclamation during the Civil War.

“Juneteenth marks both a long hard night of slavery subjugation and a promise of a brighter morning to come,” Biden said. The day is a reminder of the “terrible toll that slavery took on the country and continues to take.”

European colonists first forcibly brought enslaved Africans by ship to the British colonies that became the United States in the 1600s; millions of people were legally owned there until the 13th Amendment passed in 1865.

“Great nations don’t ignore their most painful moments…they embrace them,” Biden told a room filled with about 80 members of Congress, community leaders and activists including 94-year-old Opal Lee, who campaigned for decades to make Juneteenth a federal holiday.

Vice President Harris reminded the White House guests that they were gathered in a “house built by enslaved people,” and said the holiday would be an occasion to “reaffirm and rededicate ourselves to action.”

Federal employees will start taking the holiday off this year, observing it on Friday since Juneteenth falls on Saturday, the U.S. Office of Personnel Management said on Twitter.

Biden and his fellow Democrats are under pressure to respond to a slew of Republican-backed state bills that civil rights activists say aim to suppress voting by minorities, and to meaningfully address the disproportionate killing of Black men by police.

Some Republicans are also pushing state bills that discourage history teachers from focusing on the U.S.’s history of slavery and racism.

Many Republicans backed the Juneteenth bill in Congress; several of the over a dozen who opposed it said declaring a “Juneteenth National Independence Day” would needlessly divide or confuse Americans.

While celebrities and federal officials cheered the holiday’s creation, some questioned whether it would have real impact on the country’s deep-seated issues.

“It’s important to commemorate emancipation and to encourage everyday Americans to reckon with the history of slavery … but there is always a danger with these sort of things so they can be performative,” said Matthew Delmont, a professor of history at Dartmouth College who specializes in African-American history and civil rights.

Designating Juneteenth a federal holiday will be a “failure” if it just acknowledges the date without spurring action on issues such as police brutality, voting rights, and the racial wealth gap, Delmont said.

The law comes a year after the United States was rocked by protests against racism and policing following the murder of George Floyd, an African-American man, by a Minneapolis police officer.

“The promise for equality is not going to be fulfilled until it becomes real in our schools, on our main streets and in our neighborhoods,” he said.

LATEST
U.S. layoffs surged in January as tech slashed thousands of jobs – report
Escudero wants Marcos admin to uphold ‘no tax exemption’ policy in Maharlika fund
Man shot dead in Quezon City
Dollar climbs as central banks see inflation risks unwind
Kris Aquino gets ‘renewed confidence’ after consultation with new doctor: ‘I have a strong chance of getting better’
Your subscription could not be saved. Please try again.
Your subscription has been successful.
MOST READ
DID YOU KNOW?
Kylie Jenner Ramen Recipe: Is It Good?
How to Store Raspberries Properly
How To Play Drunk Jenga: The Ultimate Guide
Best Food to Bring Camping
Popcorn Toppings that Are Perfect for Movie Night