PH flag raised in SF and other cities for June 12

PH flag raised in SF and other cities for June 12 Philippine flag-raising events were held in major San Francisco Bay Area cities even before the actual June 12 commemoration of the 123rd Independence Day of the Philippines.

Daly City was one of the first cities to raise the Philippine flag in honor of Filipinos that make up almost 40% of its population, holding the ceremony last Monday, June 7.

Manalo, who acknowledged her Philippine-born parents, is the first Filipina Mayor of the city dubbed as the Gateway to the Peninsula.

“They raised both my sister, Carley Ann and I with the values of kapwa, pakikiramdam, bayanihan (fellowship, empathy, mutual help) and to embrace our Philippine heritage by speaking to us in Tagalog,” Manalo shared.

“As my husband and I raise our two children Ethyn and Juselle we will be sharing with them the heroes and heroines, like Lapu Lapu, Tandang Sora, Gabriella Silang, Andres Bonifacio  and as Filipino Americans we will continue to honor Larry Itliong, Philip Vera Cruz, Tita Alice Bulos, Steve Arevalo, and Dawn Mabalon, among others as we now see representation and so proud of California Attorney General Rob Bonta.”

For his part, ConGen Ferrer, in the first in-person flag-raising that he was attending in the Bay Area, reminded attendees that “We are also celebrating the 75th anniversary of the establishment of diplomatic relations between the Philippines and the United States.”

The friendship between these two countries has been strengthened by its people-to-people relations, especially in locations such as Daly City, where Philippine culture and heritage continues to thrive.  We hope that the leadership and people of Daly City will continue to serve as the bridge that links our two countries together,” Ferrer noted.

“Like many of you, I am pleased to be out and about after more than a year of sheltering-in-place.  We have all experienced an extraordinary year and we are looking forward to California’s expected reopening in a week’s time.  As we remember the heroism of those who fought for independence, we pay tribute to the everyday heroes of the pandemic, including our Filipino front liners,” Ferrer stated.

Ferrer likewise recognized that amidst the pandemic, the Filipino community is also facing a serious threat posed by rising anti-Asian hate. He expressed hope that systemic changes will result from people’s collective actions.

He delivered the same message in the next flag-raising ceremony, this time at Colma Town Hall on Wednesday June 9. 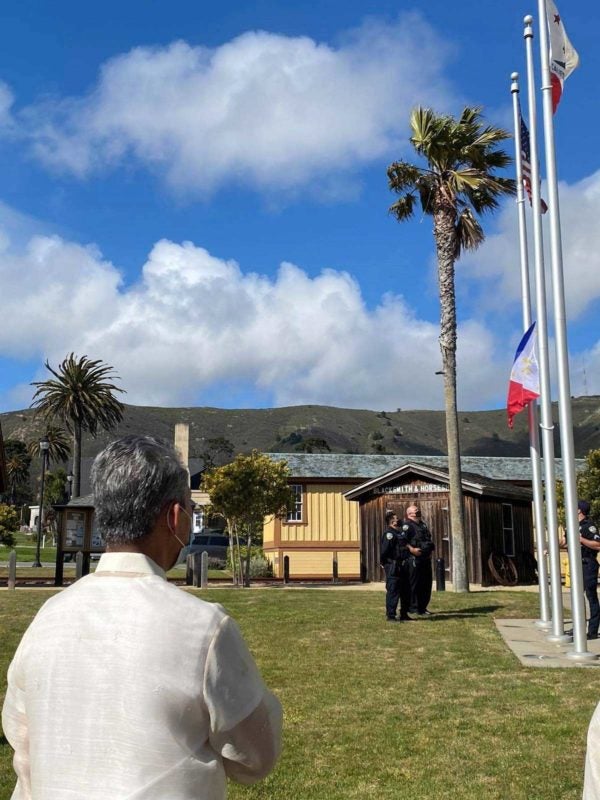 Consul General Neil Ferrer (back at the picture), together with Colma City Officials led by Mayor Diana Colvin and Council Member Joanne del Rosario witnessed the raising of the Philippine flag together with top Consulate officials and the rest of Colma Filipino community in attendance. CONTRIBUTED

“(We) give thanks to our community’s Filipino American citizens for their countless contributions to our nation’s cultural, economic and political heritage,” Colvin said.

On Friday June 11, the Philippine flag was also raised at the balcony of the San Francisco City Hall. He was presented a proclamation declaring June 12, 2021 as Filipino American Friendship and Heritage Day in San Francisco by Meron Foster, Protocol Officer at the San Francisco Mayor’s Office.

In his message, Ferrer thanked San Francisco City and County Mayor London Breed for the opportunity to honor the Philippine flag, especially this year as the Philippines and the United States commemorate the 75th Anniversary of the Establishment of Diplomatic Relations.

The consulate will host a virtual Independence Day celebration on June 26 at 6 p.m. PST (Philippine Consulate General in San Francisco) in partnership with The Filipino Channel and the National Commission for Culture and the Arts.