Lin-Manuel Miranda on “In the Heights,” Filipinos,  immigration, “Hamilton”

Lin-Manuel Miranda on “In the Heights,” Filipinos,  immigration, “Hamilton” 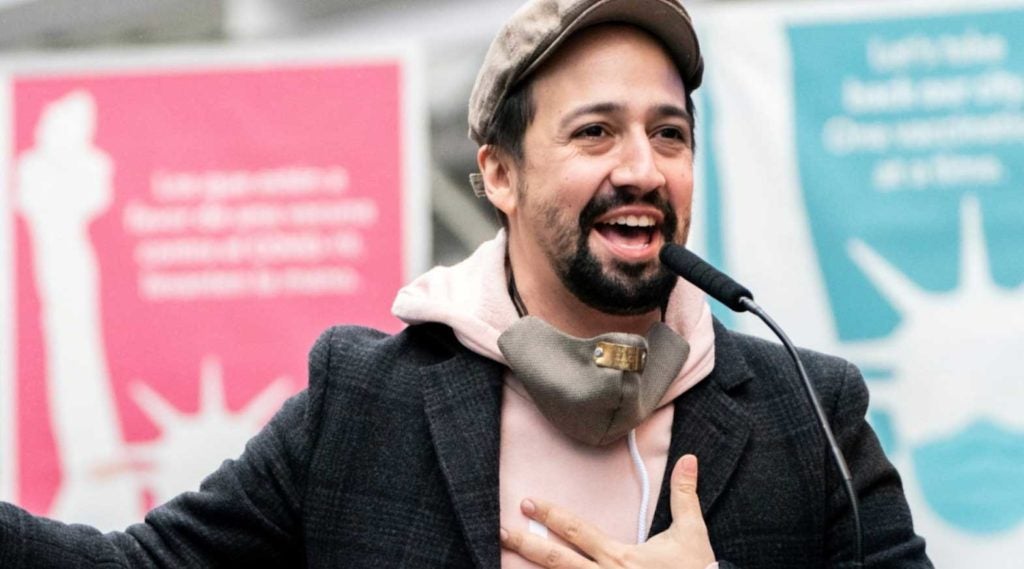 I was a film critic on TV in the ‘80s, so here’s my Siskel&Ebert take: Go no further than “In the Heights” for the feel good movie of America’s gradual re-opening.

It’s the official gushing hydrant for the country’s summer street splash, exploding with song, dance, story. Not too heavy, not too light, but after 15 months of various stages of lockdown and quarantine, it’s a nice re-entry piece into a sense of community. Lots of big screen humanity, everyone looking good.

On the Zoom junket a month ago, I talk to Lin-Manuel Miranda, the co-creator of the musical turned film. I told him I was a “Gil-yer-mo” Guillermo, that’s the way Filipinos say the double L.

“We were all colonized by the Spanish,” Miranda told me. “We’re all doing our best.”

Yes, we were all caught up in the Spanish American War, and the Filipinos were the West Coast versions of the Cubans and the Puerto Ricans, who stayed on the East Coast in NYC.  And then they were joined by the Dominicans in the ‘70s. All three of those immigrant themes are part of the movie,  but no Filipinos in the Heights?

Miranda  had a ready answer for me.  “The first international production of ‘In the Heights’ was in Manila, directed by the great Bobby Garcia, and it was my revelation that I didn’t have to translate any of the words!”

Much of the Spanish and the Tagalog were the same, apparently. OK, so he got in a Filipino angle without having to import any Filipinos from Jersey City.

I was hoping the Filipinos would be the Asian crossover  bridge in the movie. Instead, it was “Crazy Rich Asians” director John M. Chu.  Was he the first choice?

“He was really the one who was most like us,” Miranda said referring to co-writer Quiara Alegria Hudes about Chu, whom they met after an initial Hollywood version didn’t happen.

“He was first generation, his parents came from somewhere else, open a small business,” Miranda continued. “I just think he understood this particular lens on the immigrant experience. We are the kids of the folks who made the way possible. Our parents were born on the island and we grow up here and then we have to navigate what all that means. And I think John was struggling with similar questions. What do I take from my heritage, what do I pass on to my kids. John understood this at a molecular level, so he was absolutely our first choice.”

Miranda said the musical’s path went from a basement workshop to Broadway. But Chu was able to take it even further.

“When he took the reins, he really dreamed bigger than any of us possibly could,” Miranda said. “The thing that happened in the movie cannot happen on the stage, not the 96,000 Esther Williams swimming sequence, not Benny and Nina dancing up the side of a building with leaking air conditioners and fire escape while singing. He really took their dreams and turned them into Technicolor in a huge way.”

The film’s direction and editing are a marvel. But it’s the storylines that Miranda fought for.

“I feel like time has caught up with this show in a really big way, when we first opened on Broadway, I think there was so little positive representation of Latinos,” Miranda said. “Even the critics didn’t realize their bias when they were like, ‘it’s good but it’s like a little airbrushed. There wasn’t any crime. There wasn’t any drugs because they were so unaccustomed to seeing that. So it must be the ‘Sesame Street’ version of life, right? We can’t actually write about ourselves with joy and love.”

But it’s not all fluff. There’s the immigration theme that Miranda said is “ an update from the stage version made to reflect how much that immigration debate is center stage in every Latino conversation. I don’t think you can walk out of this movie the same way you walked in when you realize that Sonny (played by Gregory Diaz IV)  is struggling with it. Now it’s not a “they” who are struggling to come in, it is ‘Oh my god if that character is not American like what the f— are we even doing. So again that’s the way art changes lives.”

The other character/storyline  I related to was Nina, the neighborhood gal who goes to Stanford and then mysteriously returns. Did she make it? Was it a case of “the imposter syndrome,” where one feels they don’t belong?  Or was it the tuition that Dad struggled to pay? It’s a storyline many a BIPOC student who has gone to an elite college the last 40 years has faced.

Like me, you probably didn’t get a catchy song and dance number about your dilemma.

Nina (played by Leslie Grace) does.

Miranda said that was the hardest character to write because he was so close to it. “Going away to college, being one of very few Latinos at every school I went to that was much more my experience,” said Miranda. “When your parents make real sacrifices for you, that’s more nuanced than ‘ I’m going to run away from home and do whatever I want.’  I’m going to honor the sacrifice you made for me, but I’m also going to live my life.”

I was running out of time but I wanted to touch on “Hamilton,” the musical  Miranda applied what I call a  little affirmative action—he put the black and brown actors in the white parts.

The Founding Fathers got “Hamiltoned.”

“Well, it’s interesting,” he said. “The idea when I picked up the book was it’s an R&B hip-hop musical, so, of course, black and brown actors would play those roles. As I’m reading the book the first time, I’m picturing which of my favorite hip-hop artists should play Hercules Mulligan or George Washington. They were always people of color and the music reflects that…I was sort of more surprised that everyone was surprised when we finally came out.”

“I think it kicks open the door,” he added. “Why are we so literal when it comes to this stuff? And you know I see Shakespeare with people of every ethnicity playing the roles, why can’t that be the case with our founders, we know what they look like they’re on our f—ing money. So like let’s, let’s move forward here. But I think once you see a show that has had the diversity that we have on stage, it’s very hard to go back to sort of these all white productions because you’ve got to ask why, what stories aren’t we getting when you see that.”

It was the perfect opening to ask a question about Ishmael Reed, the MacArthur Genius grant winning novelist, satirist,  and playwright, who has written a play, “The Haunting of Lin-Manuel Miranda,” that takes Miranda to task for the failure to highlight the real history of Hamilton.

Hamilton and his in-laws, the Schuyler family,were slave owners.

Miranda may have given the actors some tone, but the historical soul remains the same but obscured.  Reed sees Miranda as duped by the Hamilton biography by Ron Chernow, which Miranda used as the main  source for his skin deep musical that glosses over our racist founders.

“I think seducing thousands of children and even the inaugural poet Amanda Gorman into believing that Hamilton and the Schuyler girls were ‘ardent abolitionists,’ must rank as a cultural crime,” Reed said to me this week.

As I asked my question about Reed of Miranda, the PR girl cuts in: “We are actually out of time.”

Then Miranda says, “I got a long schedule sorry. Thank you.”

Would have been interesting to hear his answer with “Hamilton” beginning a new tour in August.

But this is megabuck showbiz, and the PR juggernaut must go on.

Miranda’s  got this new property to sell that’s a lot more cleansing and joyful. It’s the feel-good-movie of the post-pandemic, you know. All the hydrants are gushing.

Emil Guillermo is a journalist and commentator. He writes a column for the Inquirer.net’s North American Bureau. See his vlog at www.amok.com and his FaceBook Live [email protected], [email protected] emilguillermo.media