The man accused of mowing down a Muslim family with his pickup truck in what Canadian police are calling a hate-motivated attack appeared briefly by Zoom before a judge on Thursday and is due back early next week.

Due to a publication ban, details from the five-minute hearing cannot be revealed.

Nathaniel Veltman, 20, was arrested on Sunday in a London, Ontario, mall parking lot, a short distance from the city’s oldest mosque. He was wearing what appeared to be a body-armor-type vest and a helmet at the time, police said.

Veltman, who will next appear in court on Monday, faces four charges of first-degree murder and one of attempted murder.

“It was with utmost shock and horror that I came to hear of the unspeakable crime committed last weekend,” said Mark Veltman, the accused attacker’s father, in an email on Thursday. People pray following a vigil after four members of a Muslim family were killed in what police describe as a hate-motivated attack at London Muslim Mosque in London, Ontario, Canada, June 8, 2021. REUTERS/Carlos Osorio/File Photo

“There are no words adequate to properly express my deep sorrow for the victims of this senseless act,” he added.

Police said that Veltman was not known to have links to any hate groups but added that they were still investigating and terror charges were being considered.

London Police Chief Steve Williams told the Canadian Broadcasting Corp that little information is being made public in order to guarantee the integrity of the judicial process.

“We have to be protective of the information to ensure that the court process goes untainted by anything we do or say right now,” Williams said.

Four members of one family, spanning three generations, were killed when the truck ran them over while they were out for an evening walk near their home. A fifth family member, a 9-year-old boy, remains in a hospital with serious injuries.

“The front part of the pickup truck was severely damaged” and was stained with blood, said Hasan Savehilaghi, president of a taxi firm, recounting details provided by one of his drivers who was at the scene of the arrest. 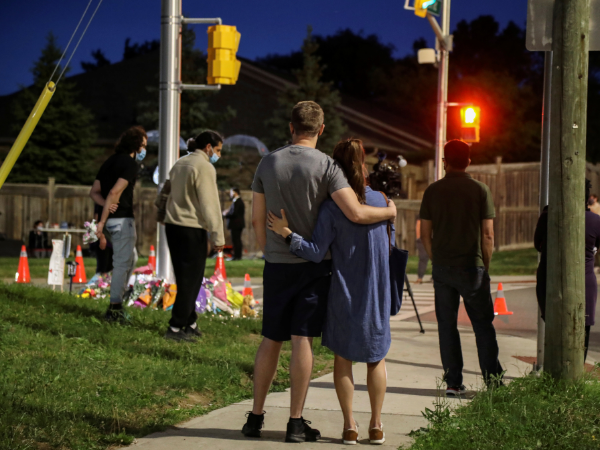 People and members of the media are seen at a makeshift memorial at the fatal crime scene where a man driving a pickup truck jumped the curb and ran over a Muslim family in what police say was a deliberately targeted anti-Islamic hate crime, in London, Ontario, Canada June 7, 2021. REUTERS/Carlos Osorio

Savehilaghi said that as the suspect was dragged from his truck by police, he was chanting, but his words were not clear. Veltman yelled at the taxi driver to film the arrest.

“He was enjoying the scene, like it was important for him to be recorded,” said Savehilaghi.

On Tuesday, Canadian Prime Minister Justin Trudeau called the killings a “terrorist attack” and vowed to clamp down on far-right groups and online hate.

Scant details about Veltman’s life have come to light.

Veltman worked part-time at an egg-packing plant in Strathroy, Ontario, near London. Neighbors at his downtown London apartment said he could often be heard playing video games at high volume late at night, the London Free Press reported. London is about halfway between Toronto and Detroit.

Sunday’s incident was the worst attack against Canadian Muslims since a man gunned down six members of a Quebec City mosque in 2017.

(Additional reporting by Allison Martell and Moira Warburton in Toronto and David Ljunggren in Ottawa; Editing by Peter Cooney and Steve Orlofsky)