Red baiting and the attempt to silence Susan Quimpo 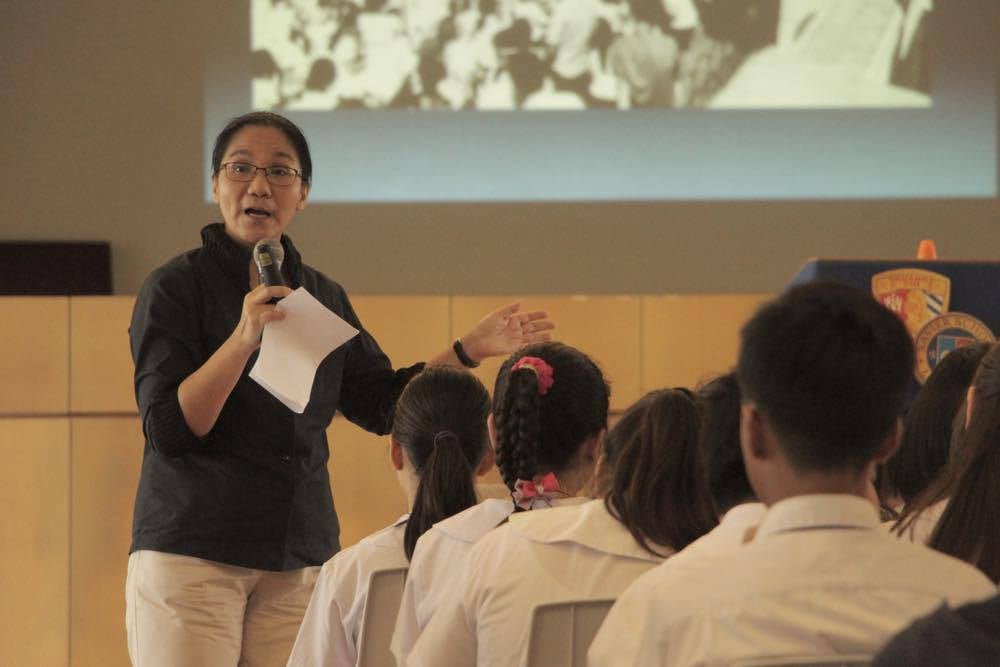 Raissa Robles and Susan Quimpo are two of the most courageous Filipino women today and it’s great that they’ve have had opportunities to speak in the U.S. about the Marcos era and its similarities with the Duterte regime.

That’s not always easy to do. There are groups that don’t want them to be heard.

Robles has been a target of Duterte and Marcos supporters who have relentlessly attacked her online. That hasn’t dampened the enthusiasm for her ongoing tour to promote her best-selling book, Marcos Martial Law: Never Again.

Quimpo had a rougher time earlier this year when she visited in the U.S. to promote Subversive Lives, a powerful chronicle of her family’s struggles during the Marcos era. Her tour sadly was marred by unexpected and puzzling cancellations.

I was reminded of that last week when, to mark Filipino American month, an online petition asked writers and academics to reject red-baiting, the despicable practice of persecuting people because of their left-leaning beliefs. It was also a tribute to Carlos Bulosan, the revered Filipino American writer and activist who was one of the known victims of red-baiting in the 1950s.

I proudly and without hesitation signed it. I’m No. 54 on the list of  people who endorsed the statement.

But then a Bay Area friend raised a troubling question: Is the statement also aimed against Susan Quimpo?

This fear was based on what happened during her book tour in March when some of her scheduled talks were suddenly cancelled. The reason: someone was spreading the lie that Susan Quimpo engages in red-baiting.

The cancellations disrupted what was already a low-budget and generally low-key tour, which often involved addressing small groups of people.

Accusing Susan Quimpo of red-baiting was bizarre and mean-spirited. She has spent the last several years speaking on campuses about the harassment and abuse activists and ordinary citizens endured during the Marcos years, and their similarities to the situation today under the fascist government of Rodrigo Duterte.

In classrooms across the country, young Filipinos have listened to her stories. One of them was Matthew Flores, a 10th grader at Xavier School in Manila who talked about what he learned from Quimpo — including the Marcos-era tactic that fits the description of red-baiting.

“Ms. Susan Quimpo shared with us the absurd reasons for detainment during the suspension writ of habeas corpus under the Martial Law, of how just by having glasses, a UP ID card, and looking Chinese, you can already be suspected of being a communist and/or a rebel against the government. That by being a student leader, a student writer, or just plain smart, it was enough to take you away from your families and subject you to torture,” he recalls in an essay on the Xavier School website.

“And that wasn’t all. She explained, in quite a lot of detail, the various methods of torture and the stories of people during their imprisonment. People our age, my age, being tortured and treated like animals- even worse than animals in fact. It was horrific to imagine.”

Flores said he grew to see the troubling connections of the Marcos years to the present.

“I feel that we are all compelled to become a more socially aware community, to see the parallelism between then and today. After knowing more about Martial Law, I can’t help but see the eerie similarities today such as the deaths, the extrajudicial killings. It seems as though through the 44 years, all we’ve done is replace the word ‘communist’ to ‘drug pusher.’ Like before, there is a dehumanisation of people.”

“The risk when you carry water for someone, is that it might end up watering the wrong plant,” he told me. “The statement of US based scholars on red baiting on the occasion of Filipino American History Month is nice but disappointing. It fails to use history’s lessons as a way of navigating through the period we are in.”

It is once again a period of repression in the Philippines and there are again different views on how to respond. It is a time when the willingness to listen to and engage with groups and individuals with different views is important.

Certainly, Susan Quimpo’s is just one voice and point of view. She comes from a family activists whose stories are told in Subversive Lives. The book tells the story of her 10 siblings, seven of whom joined the underground left in resisting the Marcos dictatorship. Five of the siblings were imprisoned by Marcos; four tortured, one forced to live in exile in Europe; one was murdered by the military and another abducted and is presumed dead.

Most of the Quimpos have become critical of the national democratic movement and the UG left which is perhaps explains the attempts to silence Susan in the Bay Area. Ironically, back in the Philippines, she’s actually worked with national democratic activists in her education efforts. The national democrats undoubtedly played a critical role in the fight against Marcos which must recognized and highlighted.

Inviting writers and activists from the Philippines, like Raissa Robles and Susan Quimpo,  to speak in the U.S. is an important and effective way to give Filipinos here deeper insights into events in the homeland.

Writers like Robles and Quimpo deserve our support.  They must not be silenced.

The academic who initiated the statement told me it had nothing to do with Quimpo and the bid to silence here earlier this year, and noted that Quimpo is not even mentioned in the petition.

So, despite the concerns of friends, I continue to support the petition which has been signed by Filipino American academics I respect and admire. I join them in affirming: “We challenge and resist tactics like red baiting that undermine our critical practice as teachers, scholars, artists and writers. We stand with our colleagues who refuse to be silenced or censored for their critical beliefs.”

How can anyone disagree with that position? I encourage you to sign the petition which you can find here.

But I also ask everyone to stand with me and others who were upset with the way Susan Quimpo was treated during her US visit in making this broader declaration: We are against those who use red-baiting and other tactics to suppress freedom of expression — including those who use false and malicious claims of red-baiting in an attempt to silence other writers.

The young Filipinos and Filipino Americans eager for information and insights from activists from the homeland — they will be the big losers if people like Susan Quimpo are denied opportunities to speak. 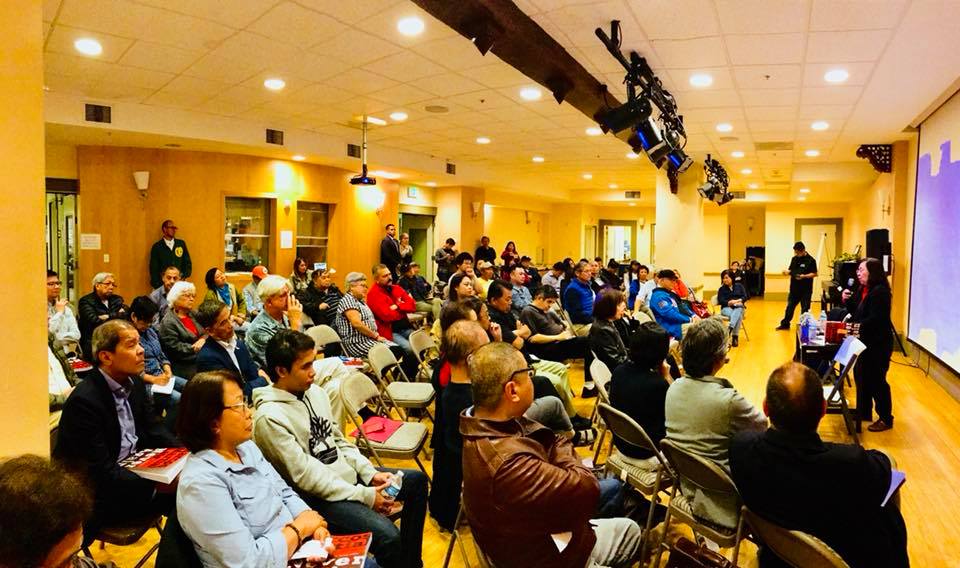 Sadly, the League of Filipino Students at San Francisco State University embraced the view of those who wished to silence Quimpo calling her recent visit a “form of self-aggrandizing via book tours and forums to disparage activists trying to build movements for peace and justice.”

This is a time for unity.

For Filipinos overseas our role is clear: to support those on the frontlines back in the Philippines, people like Raissa Robles, Susan Quimpo and other writer, artists and activists — including those with whom we don’t completely agree.

Many writers, academics and activists are now waging an important struggle in the Philippines to educate young people about what happened to us during the Marcos regime, especially since there are so many lessons from that past that could help us understand what’s going on under Duterte.

That campaign has helped young people like 16-year-old Matthew Flores understand the current situation in the Philippines.

“After the talk, I was compelled to ask myself, “What am I called to do? What do I do now?””  he wrote in his account of Susan Quimpo’s recent talk at Xavier. “I believe the best way we can properly honor the Martial Law victims is by making sure it doesn’t happen again.

“However, we must not end with being just socially aware. Awareness may be the key to change, but it is only when we move our hands can the lock be opened. The talk inspires us to take action and fight for what we believe in. Despite the challenges we face, we should always strive for truth and justice.”

You can catch a video of Raissa Robles’ talk at the UC Berkeley Graduate School of Journalism here.