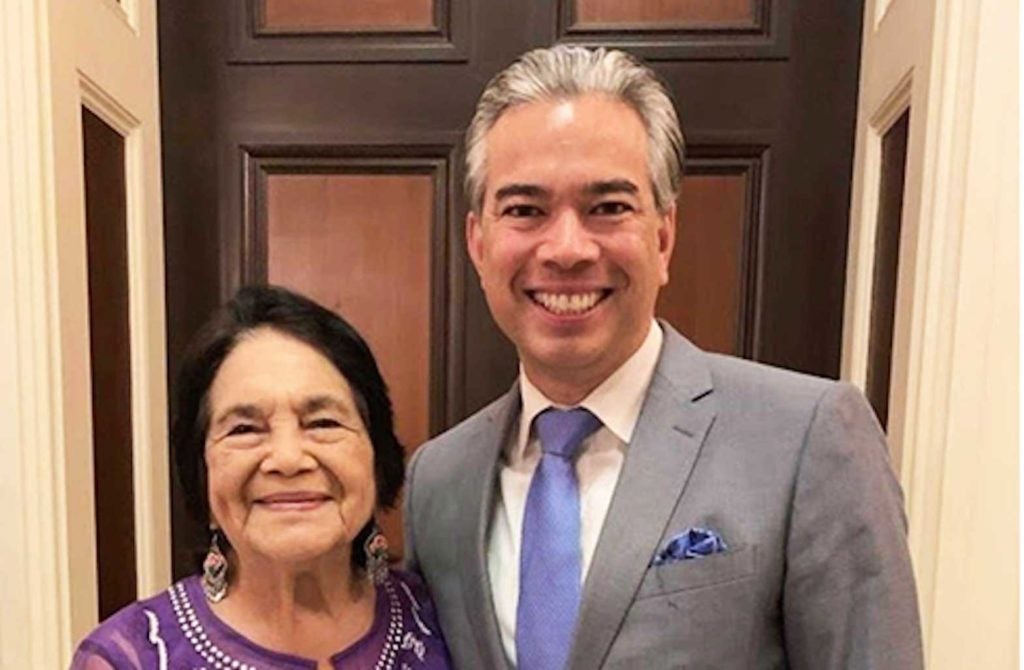 Bonta, also the first Filipino American elected to the state legislature, was appointed as AG in March, after Xavier Becerra left to become President Joe Biden’s secretary of health and human services.

He’s a Yale Law School graduate and the son of social justice activists who organized Latino and Filipino farmworkers for racial and economic rights. And Bonta’s own public service record has reflected a similar worldview.

The head of the San Francisco Police Officers Association told Politico earlier this month that Bonta’s record puts him “to the left of any prior California attorney general,” according to a May 6 article. (Police unions are one of the chief constituencies opposing the newer, more progressive vision of law enforcement that’s taking hold in major cities.

The new attorney general told Reuters during an interview on May 19 that he is creating a new “officer-involved shooting division,” which will investigate police shootings of unarmed Californians. He noted that his own mother, in the past, has been the victim of an assault that was apparently racially-motivated. And he repeatedly addressed people of Asian and Pacific Islander descent in particular.

I spoke with Bonta about his new job, and how he expects to bring a new approach to the role.

The following answers have been edited for length and clarity.

Reuters: What does it mean for someone like you to take such an important position, and at such a critical time?

BONTA: Representation matters, and representation in all leadership matters. Some communities have historically been prevented from certain opportunities, and they don’t believe they’re a part unless they see someone who looks like them.

Quite a few people have reached out — especially as anti-Asian and Pacific Islander violence is on the rise and we’re seeing these horrific racially-motivated attacks — and they’ve said seeing me in this role is inspiring, and gives them hope that their community matters. That shows that maybe there was a ceiling, a barrier, that was once present, but is no longer there.

They’ve also in the same breath shared their pain, their fear and their anxiety. Feeling like they can’t walk outside, or go shopping, or run an errand without the fear of an assault — being shoved down, or spit on, or even murdered.

Having someone with deep roots, and proudly, in the community, who is a Filipino, an immigrant, and an Asian-American, I think gives faith that they’ll be looked after. And that’s a part of my goal — to make their fight my fight.

Reuters: How have you been affected by these attacks against people of Asian and Pacific Islander descent?

Bonta: It’s personal, and it hurts. It makes me worried. And I know my peers are also worried about their lolas and lolos and nanays and tatays — their parents and grandparents.

It reminds me of a time my own mother was attacked — shoved to the ground and left in a heap — many years ago. I hadn’t thought about that in a long time, until I saw images and videos of attacks on people who are Asian or Pacific Islander in California and New York. I looked at one video in New York and thought “that could’ve been my mom.”

It makes me angry and hurt, but it also fuels me to act.

REUTERS: You recently announced a “racial justice bureau.” What makes this effort different from similar commissions and other initiatives we’ve seen in many cities over time, almost all of which ended up the focus of activists’ complaints, or a push to go further with reform?

BONTA: It’s designed to create action and initiatives that change people’s lives. It’s not a study or a commission that’ll put together a report that’ll share information, which, as you mention, won’t be surprising. It’s a commitment to putting people and real resources to work to combat hate. It’ll take on anti-AAPI violence, because that’s a state of emergency. It’ll investigate white supremacist groups and other hate organizations.

It’ll also address hate-crimes. We’ve learned over 50% of hate crimes aren’t identified and investigated as such, and so it’s important to use existing laws to identify and investigate cases as potential hate crimes. That doesn’t mean all the elements will be found, but things need to be done differently, especially when we’re seeing so many clear patterns.

REUTERS: Progressive prosecutors everywhere have faced serious resistance, although some prominent ones, like Philadelphia’s Larry Krasner, were recently re-elected. Any thoughts on how you’ll deal with pushback to your agenda?

BONTA: I plan to lead with my heart and my values, the way I’ve always led. I don’t have any pre-decisions, and I don’t know how people are going to react. I can only control what I’m going to do. And I’m going to collaborate and work to make people’s lives better, correct historic wrongs and create more justice.

Part of that is working to infuse our criminal justice system with more humanity, compassion and fairness. That’s not mutually exclusive to safety, and we must be open to recognizing opportunities for progress. So I’m committed to working with my team and the Department of Justice on my vision, and hopefully I’ll earn support and buy-in for that vision, because I think it’s the right one to get us where we need to go.

The opinions expressed here are those of the author. Reuters News, under the Trust Principles, is committed to integrity, independence and freedom from bias.