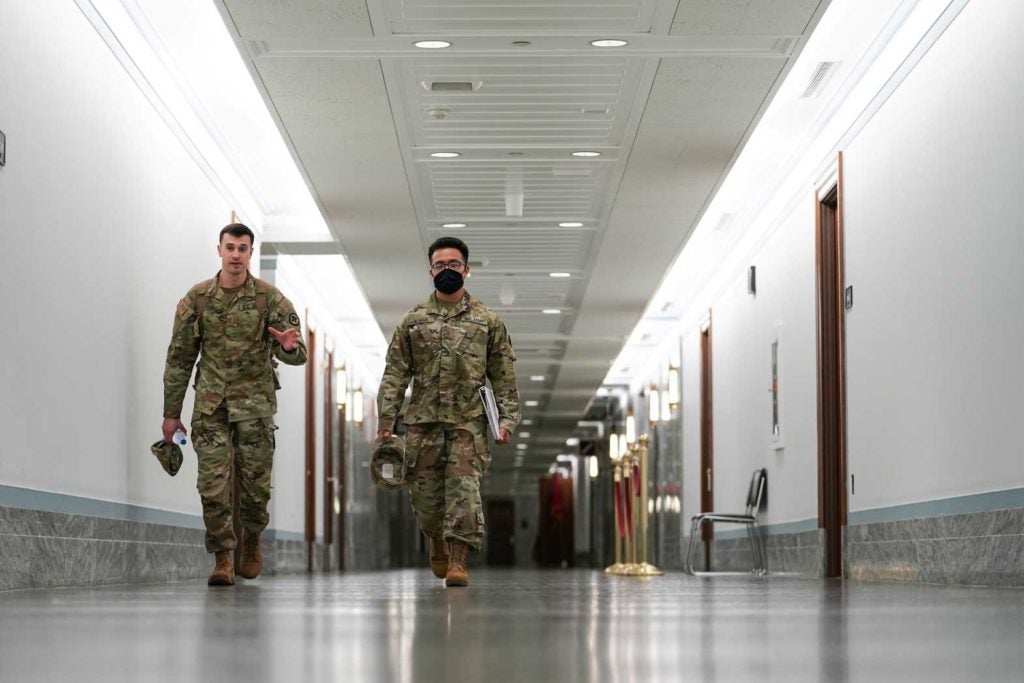 Members of the National Guard walk in the Dirksen Senate Office Building on Capitol Hill on the final days of their deployment following the January 6 Capitol riots in Washington, U.S., May 23, 2021. REUTERS/Sarah Silbiger

The defense spending request for fiscal 2022, which was sent to Congress on Friday, invests in troop readiness, space, the Pacific Deterrence Initiative aimed at countering China’s military build-up in Asia and nuclear weapons technology.

The budget request would buy warships and jets, and pay for maintenance and salaries. An additional $38 billion is earmarked for defense-related programs at the Federal Bureau of Investigation, Department of Energy and other agencies, bringing the national security budget to $753 billion, a 1.7% increase over the 2021 figure.

There is also money to further develop and test hypersonic weapons and other “next generation” systems as the military aims to build capabilities to counter Russia and China.

Presidential budget requests, including those for the military, are commonly a starting point for negotiations with Congress, which ultimately decides how funds are spent.

The proposed pay raise for military and civilian Defense Department workers follows a 3% raise for the 2021 fiscal year, which ends Sept. 30.

More than $5 billion will be spent on the Pacific Deterrence Initiative, created to counter China and focusing on competition in the Indo-Pacific with an aim to boost U.S. preparedness in the region through funding radars, satellites and missile systems. Specifically, the Pentagon plans to increase investment in missiles like the Raytheon Technologies-made Tomahawk and Standard Missile 6 to keep China at bay.

Tensions with an increasingly assertive China are on the minds of U.S. military planners. Beijing accused the United States last week of threatening the peace and stability of the Taiwan Strait after a U.S. warship again sailed through the sensitive waterway.

To pay for this shift and things like a $112 billion research budget, the Pentagon is seeking to divest some of its older equipment with higher maintenance costs.

Divestment from the Army, Navy and Air Force will total $2.8 billion in fiscal 2022.

The retirements include four Littoral Combat Ships, 42 A-10 aircraft, which provide close air support to ground troops, as well as 14 KC-10 and 18 KC-135 planes in the mid-air refueling fleets.

Fewer M1 Abrams tanks made by General Dynamics will be purchased, dropping to 70 from 102 in fiscal 2021.

Among the Pentagon’s competing priorities, the Biden administration requested 85 stealthy F-35 fighter jets made by Lockheed Martin. The 2021 and 2020 presidential budgets requested 79 and 78 of the jets respectively, but ultimately Congress authorized additional fighters. Senators and governors have come out to support the jet, which has a huge industrial base.

The request increases funding for the U.S. Space Force by $2 billion to $17.4 billion, but the U.S. Navy’s shipbuilding request was eight new warships versus a plan for 12 under former president Donald Trump.

Despite shaving numbers from older systems, the Biden administration will invest $27.7 billion in modernizing the U.S. nuclear triad of land-launched nuclear missiles, nuclear missile-armed submarines and aircraft with nuclear bombs and missiles.

The budget includes $617 million to prepare for, adapt to and mitigate climate change.