Boarding gates at the Midfield Satellite Concourse (MDC) of the Tom Bradley International Terminal (TBIT) where PAL is slated to transfer; food availability is limited to vending machines (below and center of pictures). CONTRIBUTED

Philippine Airlines is complaining that the transfer of its boarding gates by month’s end to a new site at LAX, the largest international airport in Southern California would be a huge inconvenience to its passengers.

PAL has been flying Filipino Americans to and from the U.S. West Coast since 1946, and to and from LAX since 1984 where it operated up to 17 weekly flights before the pandemic.

PAL North America Regional Head Bryan Lim said that PAL management disagreed with the order in talks with LAWA as early as 2018, contending that the move would inconvenience its passengers, especially the elderly. 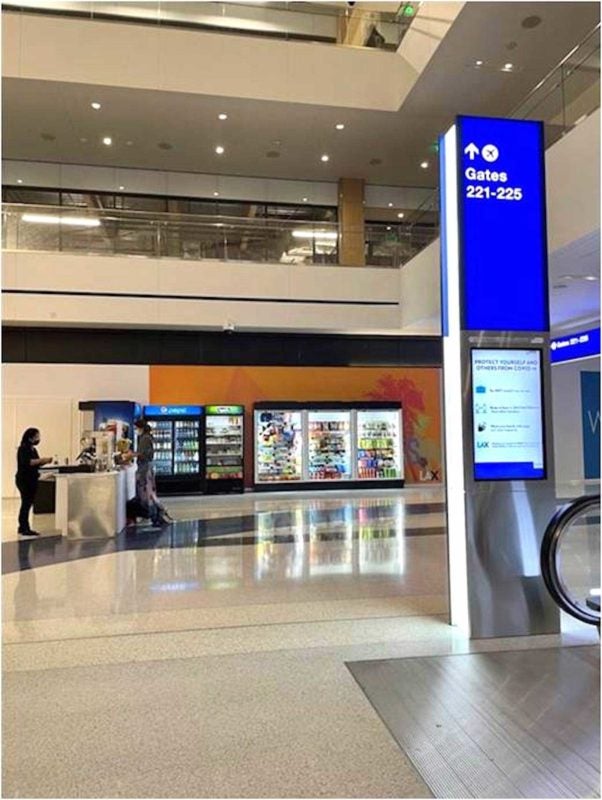 The appeal letter reasoned that the relocation “would result in a significantly degraded passenger experience with a disproportionate impact on our senior citizen passengers and our passengers who are persons with disabilities (PWD),” who reportedly account for the highest usage of wheelchair services among operators at the TBIT.

The Sta. Maria letter also estimates that ambulatory passengers will take longer time to travel from PAL’s present check-in counters to the MSC which could, in turn, adversely impact their on-time departure performance and incur additional costs for the PAL, including higher costs for wheelchair services due to additional demand

Additional inconvenience poised by the planned transfer is that there are only vending machines, a stall with light snacks/drinks and a food delivery service which are the barest food services to cater to the needs of the passengers departing from the MSC.

The relegation of PAL to the new site, the letter continued, would put PAL at a competitive disadvantage, as all their direct competitors — Korean Air, Asiana, EVA Air, Cathay Pacific, China Airlines, Japan Airlines and Singapore Airlines, all of whom serve Manila via two trespective hubs — are to be assigned gates at the main TBIT concourse. Other Asian airlines designated to operate out of the MSC do not fly to Manila at present, e.g., Sichuan Airlines, Hainan Airlines, Hong Kong Airlines, etc.

Responding to PAL in an April 26, 2021 letter, LAWA management maintains that it strongly values its longstanding relationship with Philippine Airlines and Filipino residents and visitors and anticipates providing outstanding guest experience for Philippine Airlines passengers at LAX for many years to come.

“The new Tom Bradley International Terminal (TBIT) West Gates make up a brand new state-of-the-art concourse that is designed as a seamless extension of the Tom Bradley International Terminal. Therefore, the operational parameters of airline functions at the TBIT West Gates are expected to be substantially similar to current practices for airlines operating at TBIT…The innovations and technology at the TBIT West Gates will enhance the overall efficiency and experience for guests and operators,” the letter continued.

On concerns about the elders and PWD passengers, LAWA says it is committed to providing efficient transit of these passengers, mentioning the use of at least 12 Terminal Transport Vehicles (TTV) that can transport 4-5 passengers at any given time. The vessels will necessary partitionsfor COVID-19 separation and will ensure that transfer of wheelchair passengers is not unduly delayed.

LAWA also does not expect undue delays with arrivals or bag transfers, as all international passengers are required to clear immigration and customs at the first port of entry, which is LAX. It also confirmed that the transfer times from the U.S. Customs and Border Protection Federal Inspection Station are comparable to the transfer times from some of the current TBIT gates.

As a result of the relocation, a PAL advisory—despite its protest–was released for departing and arriving LAX passengers informing of the move to the new Midfield Satellite Concourse of LAX beginning June 1.

Asking for passengers’ patience and understanding, PAL alerted them to the following:

PAL assured that it is urgently appealing to the airport authority to reconsider the relocation and that it is seeking help from city officials. PAL’s Sta. Maria wrote to Los Angeles Mayor Eric Garcetti to raise PAL’s concern as LAWA is the LA City department that owns and operates LAX.

Garcetti reportedly sent PAL an email deferring to LAWA, reasoning that the latter had considered everything leading to the decision. Still, PAL is reportedly trying to lobby for his reconsideration.

PAL North American Regional Head Lim has also appealed to the president of the Board of Airport Commissioners and Chair of the Trade, Travel and Tourism Committee of Los Angeles not to push through with the planned move.