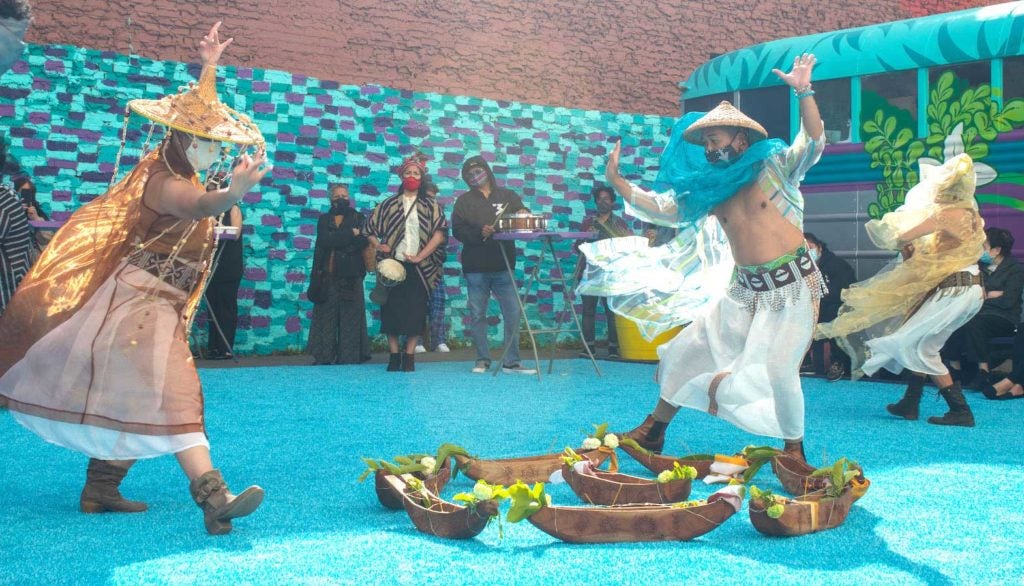 On top of several legacy organizations in the Filipino community in San Francisco, SOMA Pilipinas was one of the first cultural districts selected for state designation by the California Arts Council in 2017.

It was officially recognized as the Filipino Cultural Heritage District by the city of San Francisco in 2016. It spans 1.5 miles bounded by Market Street to the north, Brannan Street to the south, Eleventh Street to the west, and Second Street to the east.

To celebrate the cultural district’s fifth anniversary, a socially distant and pandemic protocol compliant event was held on April 29, 2021 at Kapwa Gardens, the newest asset and a pandemic-inspired space in SOMA Pilipinas. It was the first mass gathering of community leaders and members since the easing of lockdown and restrictions in the city. 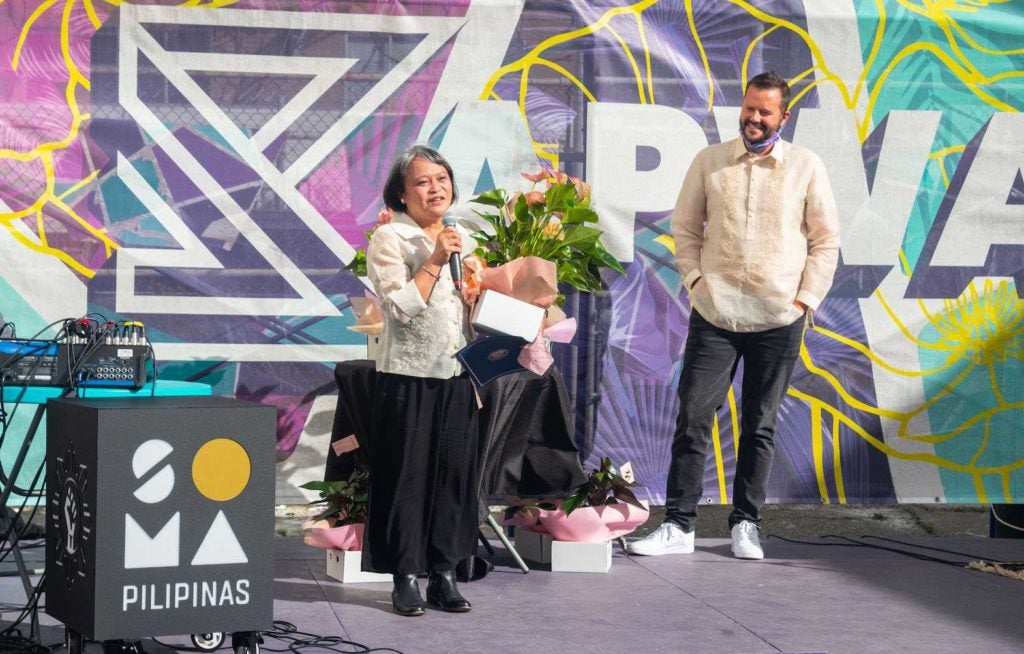 The event started with an invocation in the form of a ritual dance offering and ceremonial performance, Lakbai Diwa, Diasporic Spirit, directed and choreographed by Alleluia Panis, executive and artistic director of Kularts, a SOMA Pilipinas legacy organization and the nation’s premiere presenter of indigenous and contemporary Pilipino arts.

Honors and recognition were given to community leaders and members. This included a Certificate of Honor presented by District 6 Supervisor, Matt Haney, to Bernadette Borja Sy, executive director of the Filipino American Development Foundation, for her and her family’s contribution and efforts in the creation of what now has become SOMA Pilipinas.

“Much of our work is really cultural celebration and community building, and the pandemic really impacted that,” says SOMA Pilipinas Executive Director, Raquel Redondiez. “At the same time, it also becomes an opportunity for coming together to creatively address the situation as well as thinking more outside the box, and to take a step back and reflect.”

In 2018, SOMA Pilipinas received the prestigious National Endowment for the Arts’ Our Town Grant for Creative Placemaking. It was a recipient of the 2019 Community Alliance Award for Revitalization by the American Institute of Architects San Francisco and the 2020 Yerba Buena Center for the Arts 100 Honoree. As with the rest of the world, the pandemic and the resulting lockdown and restrictions for health and safety had shifted much of the cultural district’s operations online, but the work had not slowed down.

Redondiez says that the work with the cultural district “has been as heavy, if not more” and that the pandemic intensified issues within the community, such as insecurities with housing and rent affordability.

The pandemic also brought a great deal of loss to the community with many Filipino front-line workers who had risked their health and safety. Mental health issues also increased and resulted in a rise in suicide rates among youth.

Resurgence in overt racism and violence against Asian Americans, most especially elders, has also been a matter of grave concern in the Filipino community. Filipinos who had died from police brutality was brought into prominence with the death of Angelo Quinto in the hands of law enforcers.

SOMA Pilipinas is addressing this concern as a community on different fronts. It has provided self-defense workshops to community members as well as reaching out to seniors for their health and safety, from simply checking in on them about how they are feeling, to escorting them, and doing food drop-offs.

The most important achievement, so far, is the visibility and recognition of the Filipino community in San Francisco and the ability to “demand accountability from the city in its role in displacement and the lack of equity when it comes to resources, and the lack of recognition.”

“SOMA Pilipinas and all the efforts involved in it have provided an important platform to be able to talk about the issues that are impacting our community,” says Redondiez.