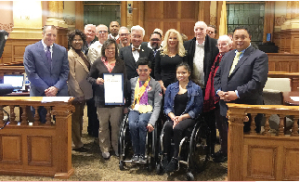 “Congratulations to Raymond for his incredible achievements on a global scale,” said Jersey City Mayor Steven Fulop. “Jersey City is lucky to have a role model like him and we look forward to him setting many more records throughout his career.”

“We are proud to have a Jersey City native like Raymond represent our city on an international stage,” said Jersey City Council President Rolando Lavarro. “Just as he has done in London and now in Rio de Janeiro, I have no doubt that he will continue to make Jersey City proud and serve as a positive role model for our city’s youth.”

“I’m a little bit more experienced now. To come back for my second one was a great feeling and now I’m looking forward to Tokyo in four years. Rio put on a great Paralympic games but I know Tokyo would go above and beyond,” Martin told the Asian Journal in an interview after the ceremonies. “I’m going to hit training a lot harder, if that is even possible.”

London offered four events for his category and Rio offered three. He competed in all events and won gold in six and a silver on his seventh.

Asked about what this honor from his city meant to him, he replied with a quick smile.

“It means a lot. My home is here in Jersey City, it feels good to come back and it feels refreshing that there are a lot of Filipinos supporting me,” he said.

“You can be anything you want to as long as you put your mind to it. You can be a doctor, a lawyer, a professional athlete, just do a lot of hard work. It is possible,” he told younger Filipino Americans who attended.

“No, I did not imagine myself as a gold medalist in the Paralympic games, or at this level of performance, for that matter,” he admitted.

That changed in 2010 when he decided to try and go to his first games, the 2012 Paralympics in London. He was then 16 years old.

“When I had a good performance there, I knew that I could do it,” he said.

“Ray is a really special person, he serves as an inspiration to our current students and alumni at the Hudson County Schools of Technology, demonstrating that hard work and dedication truly do pay off,” said HCST Superintendent of Schools Frank J. Gargiulo. “We are elated that Jersey City is honoring an alumni of our schools, the recognition is well deserved.”

The HCST Foundation originally awarded Martin a scholarship so he could attend the trials for the 2012 London Paralympics.

“The records and accomplishments that Raymond has achieved is no surprise to the HCST family,” said HCST Foundation Executive Director Linda J. Quentzel. “We always believed in his abilities and determination, and knew we were making a wise investment in our student in helping him get to the 2012 Paralympics.”

Martin is entering his senior year at the University of Illinois, concentrating in science and majoring in the Physician’s Assistant program.