On May 13 - remembering Our Lady of Fatima

On May 13 – remembering Our Lady of Fatima 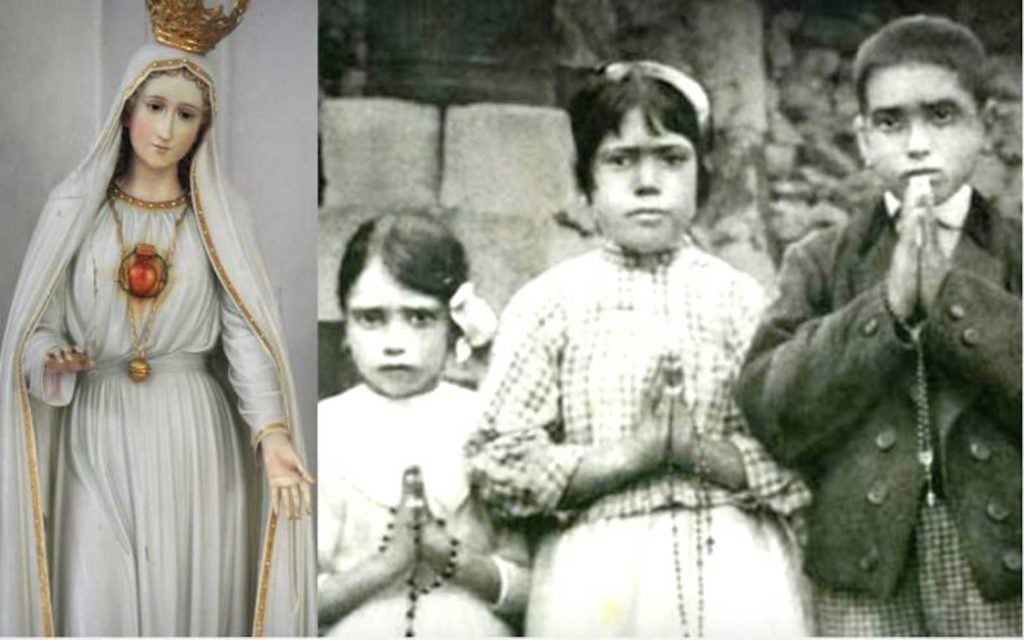 Our Lady of Fatima reportedly appeared to Francisco Marto, his sister, Jacinta Marto, and their cousin, Lúcia dos Santos, on a Portuguese hillside. PUBLIC DOMAIN

A hundred and four years ago, a massive crowd of Christians gathered in the Portuguese village of Fatima in 1917 and witnessed the so-called “the Miracle of the Sun.” Among them were a hundred of scientifically-inclined cynics, the merely curious, and a dozen reporters who wrote that, after the miraculous events and apparitions, more than a few skeptics became converts.

As always, there were those who doubted and pooh-poohed the event saying: Why would we believe those poor farm children? To this date, we encounter educated people who still make attempts to debunk the Miracle of the Sun and downplay it as “farcical,” which calls to mind an adage attributed to St. Thomas Aquinas:

Evidence-based movies have been produced, eyewitness-based conversion stories have been documented, and research-based books have been published since 1917. Photos and videos of the 1917 occurrences have been archived and their original copies guarded safely.

Fact 1: On October 13, 1917, the virgin Mother of Jesus appeared to three shepherd children – Francisco Marto, his sister, Jacinta Marto, and their cousin, Lúcia dos Santos – on a Portuguese hillside and gave them an urgent message for the Universal Church.

Fact 2: Our Lady of Fatima effectively confirmed that the urgent message of repentance was from God the Father in Heaven by showing the Miracle of the Sun.

Fact 3: The miraculous event, both terrifying and astonishing, was reported and confirmed on the same day by local secular newspapers, when TV and radio broadcasting was yet in the drawing board, in these words: “Before the astonished eyes of the crowd, whose aspect was biblical as they stood bare-headed, eagerly searching the sky, the sun trembled, made sudden incredible movements outside all cosmic laws—the sun ‘danced’ according to the typical expression of the people.”

The prelude to this miraculous event were the May 13, 1917 apparitions to the three little Portuguese children of Mary, the Mother of God, whom the children described as “a Lady more brilliant than the Sun.” In the Universal Church, May 13 was officially declared as the solemn feast day of Our Lady of Fatima.

During the 1917 events, Francisco was only 10 years old, Jacinta 7, and Lucia was also 7. Both Francisco and Jacinta died of influenza, the former in 1919 and the latter in 1920. Biographers of both saints note that until the end, the saints were praying the Holy Rosary and offering their sufferings for world peace, conversion of sinners, and for the Holy Father. Their cousin, Lúcia dos Santos, became a Discalced Carmelite nun, and God blessed her with a long life to witness Jacinta and Francisco beatified in 2000. Sister Lúcia, who jotted down the secrets of Fatima in her memoirs, died in 2005.

I reiterate the valid question of the unbelievers: Why would we believe those poor farm children?

In 2016, three years after his election, Pope Francis told the Portuguese bishops his wish to visit Fatima, Tengo ganas de ir a Fátima. Then, on the 100th anniversary of the first apparition on May 13, 2017, his wish was granted. Pope Francis went to Fátima and canonized the Marto children, who are now considered two of the youngest Catholic saints, with Jacinta being the youngest saint who did not die a martyr.

Catholic canonization, which is the final step in declaring a deceased person a saint, is one of the toughest formal processes in recognizing a person’s holiness. Quite recently, Archbishop Fulton Sheen’s beatification was temporarily halted due to some technicalities and issues even after everyone else in the Vatican said “go.” To reach this stage, all documents and factual evidence related to the candidate’s life, persona, and heroic virtues are subjected to a series of thorough and comprehensive scrutiny with meticulous attention to details – in addition to the presence of a devil’s advocate whose job is to demolish everything good in the person. Most importantly, a second miracle attributed to prayers made to the candidate is required.

Turkish assassin, Mehmet Ali Agca, was hell-bent on killing the Vicar of Christ on earth. On May 13, 1981, on the Feast of Our Lady of Fatima, at St. Peter’s Square in Vatican, Agca got his chance and shot John Paul II four times. The Holy Father fell down and suffered severe blood loss while being brought to the hospital. Attributing to Mary’s mantle of protection the fact of having survived the four bullets fired by the Turkish assassin, the Supreme Pontiff went to Portugal for the main purpose of thanking Mary, Our Lady of Fatima.

Jose Mario Bautista Maximiano (facebook.com/josemario.maximiano) is the author of MCMLXXII: 500-Taong Kristiyano. Volume Two (Claretian, 2021) and THE CHURCH CAN HANDLE THE TRUTH (Claretian, 2017).