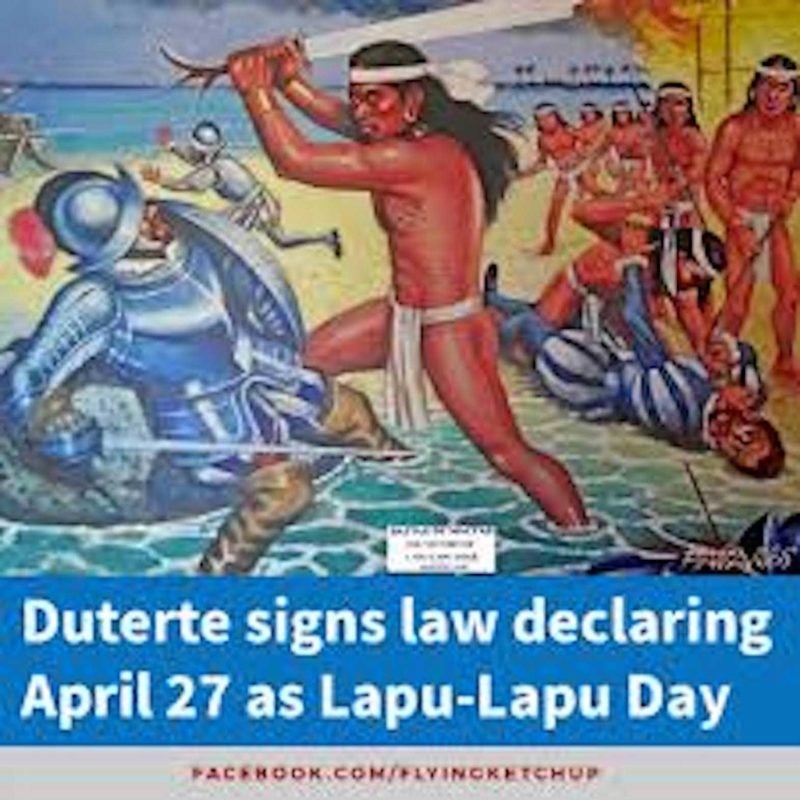 As the nation commemorates the 500-year anniversary of the Battle of Mactan, Malacañan spokesman Harry Roque once again expressed his veneration for the Philippine commander-in-chief by saying: He is my “modern-day Lapu Lapu!” The world wonders who believes him anyway. But Roque’s pronouncement pains the Filipino heart because Lapu Lapu is nothing like the “inutile” commander-in-chief.

Lapu Lapu was the Mactan chief who symbolized the bravery running in the veins of every Filipino. As an authentic leader of his people, he stood his ground, ready to spill his blood, and fought back the invading aliens.

Au contraire mon frère, just a couple of weeks ago, the Filipino and Chinese officials have engaged themselves in a verbal tussle over a hundred Chinese ships surrounding Julian Felipe Reef. China was definitely encroaching on the waters, which the Permanent Court of Arbitration in The Hague in said in a historic ruling belong to the Philippines. And what did the commander-in-chief of the Armed Forces of the Philippines do? Nothing. Absolutely nothing.

Lapu Lapu of yore would be gravely offended. If ever, the courageous hero of Mactan would tell Roque: Don’t you remember that last year, by his own admission, your commander-in-chief said repeatedly: On this matter, talagang inutil ako d’yan, walang magawa (“I am inutile and cannot do anything…”)? He who is a bully to his own people is nothing but a meek lamb to China.

Not only Lapu Lapu but all Filipino heroes are now turning in their graves. At 35, Dr. Jose Rizal offered his dear life without sabre-rattling and aggressive rhetoric (“jet-skiing” to face the enemies); for his love of country he bravely faced the firing squad armed with Remington rifles at the Luneta. Like Rizal, Andres Bonifacio at 33 offered himself on the altar of martyrdom and is likely now fuming mad with the commander-in-chief because of the latter’s “meek and humble” submission to China of the latter.

Graciano López Jaena and Marcelo H. Del Pilar must be extremely shocked by such admission of incompetence in protecting our territorial rights and sovereignty. Leaving his family, country and comfort zone in Bulacan, Del Pilar went to Spain, worked himself to death and, in the words of Leon Ma. Guerrero, “dragged himself to Barcelona to wait for a ship that would take him back home. He was so wretchedly sick that, like an animal, he had to climb on hands and knees up to the poor garret where he lived.”

The lack of winter clothes and the fangs of hunger took a heavy toll on the health of López Jaena and Del Pilar. Imagine how they kept themselves warm during cold days by picking up and smoking discarded cigarette butts that littered the streets. At the end, their lungs were racked with tuberculosis and their physical constitution was obviously damaged by years of hardships and malnourishment. Imagine the anguish and the loneliness felt by our heroes  before dying in a strange land. Both were buried in borrowed grounds in 1896.

López Jaena and Del Pilar, Rizal and Bonifacio, Gabriel Silang and Tandang Sora, and a host of valiant Filipinos stood their ground, ready to make the ultimate sacrifice, and fought for Inang Bayan. The polar opposite of what they did is capitulation, meaning submission that shamefully implies an admission of defeat, a “ball-less” surrender, which the present Philippine commander-in-chief seems to manifest in front of China’s claim of the Philippine waters.

And what is the price of capitulation? Our fishermen are starving because more than 260 tons of fish are illegally appropriated on a daily basis by huge Chinese fishing vessels. It means we are losing more than 30 billion pesos annually in damaged marine life and lost income for the local fishing industry due to China’s fishing operations in our territorial waters and, according to the environmental group Homonhon Environmental Rescue Organization (Hero), it is “worse than invasion.”

Soldiers, from privates to generals buried at the Libingan ng mga (tunay na) Bayani, who served during World War II, paid the dear price of sacrifice for every square inch of the archipelago and the waters that surround it. “This land is mine. God gave this land to me (us)!”

Mon frère Harry Roque, with due respect, do not insult the hero of Mactan by comparing him to your boss. Nothing like Lapu Lapu, the present commander-in-chief of the Armed Forces of the Philippines is the opposite of the true meaning of patriotism, a disgrace among Filipino presidents who served the country with honor and courage, and an unrivaled valedictorian in the hall of shame.