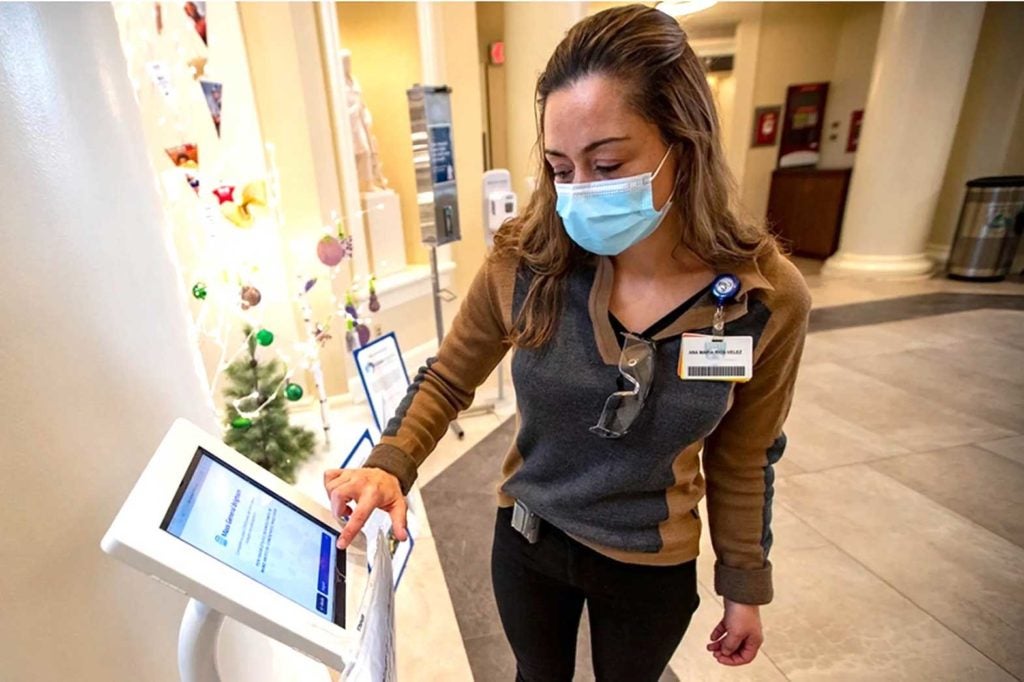 Interpreter Ana Maria Rios-Velez demonstrates the screening app at the front entrance of Brigham and Women’s Hospital in Boston. It has a multilingual function to better communicate with non-English-speaking patients and staffers.  (JESSE COSTA / WBUR)

In March 2020, just weeks into the covid-19 pandemic, the incident command center at Brigham and Women’s Hospital in Boston was scrambling to understand this deadly new disease. It appeared to be killing more Black and brown patients than whites. For Latinos, there was an additional warning sign: language.

Patients who didn’t speak much, or any, English had a 35% greater chance of death.

Clinicians who couldn’t communicate clearly with patients in the hospital’s covid units noticed it was affecting outcomes.

“We had an inkling that language was going to be an issue early on,” said Dr. Karthik Sivashanker, then Brigham’s medical director for quality, safety and equity. “We were getting safety reports saying language is a problem.”

Sivashanker dived into the records, isolating and layering the unique characteristics of each of the patients who died: their race, age and sex and whether they spoke English.

“That’s where we started to really discover some deeper, previously invisible inequities,” he said.

Inequities that weren’t about race alone.

Hospitals across the country have reported more hospitalizations and deaths of Black and Latino patients than of whites. Black and brown patients may be more susceptible because they are more likely to have a chronic illness that increases the risk of serious covid. But when the Brigham team compared Black and brown patients with white patients who had similar chronic illnesses, they found no difference in the risk of death from covid.

But a difference did emerge for Latino patients who don’t speak English. That sobering realization helped them home in on a specific health disparity, think about some possible solutions and begin a commitment to change.

But first, Brigham had to unravel this latest example of a life-threatening health disparity. It started outside the hospital, in lower-income communities in and just outside Boston, where the coronavirus spread quickly among many native Spanish speakers who live in close quarters with jobs they can’t do from home.

Some avoided coming to the hospital until they were very sick, because they didn’t trust the care in big hospitals or feared detection by immigration authorities. Nevertheless, just weeks into the pandemic, covid patients who spoke little English began surging into Boston hospitals, including Brigham and Women’s.

“We were, frankly, not fully prepared for that surge,” said Sivashanker. “We have really amazing interpreter services, but they were starting to get overwhelmed.”

“In the beginning, we didn’t know how to act. We were panicking,” said Ana Maria Rios-Velez, a Spanish-language interpreter at Brigham.

Rios-Velez remembered searching for words to translate this new disease and experience for patients. When called to a covid patient’s room, interpreters were confused about whether they could go in and how close they should get to a patient. Some interpreters said they felt disposable in the early days of the pandemic, when they weren’t given adequate personal protective equipment.

When she had PPE, Rios-Velez said, she still struggled to gain a patient’s trust from behind a mask, face shield and gown. For safety, many interpreters were urged to work from home. But speaking to patients over the phone created new problems.

And Rios-Velez couldn’t look her patients in the eye to put them at ease and build a connection.

“It’s not only the voice. Sometimes I need to see the lips, if smiling,” she said. “I want them to see the compassion in me.”

Brigham responded by adding more interpreters and buying more iPads so remote workers could see patients. The hospital purchased amplifiers to raise the volume of patients’ voices above the beeps and machines humming in an ICU. The Mass General Brigham network is piloting the use of interpreters available via video in primary care offices. A study found Spanish-speaking patients used telemedicine less than white patients during the pandemic.

“It was really tough. I got sick and had to take a week off,” said Yilu Ma, Brigham’s director of interpreter services. Mass General Brigham is now expanding a centralized translation service for the entire hospital network.

Inequities Within the Hospital Workforce

Brigham and Women’s analytics team uncovered other disparities. Lower-paid employees were getting covid more often than nurses and doctors. Sivashanker said there were dozens of small group meetings with medical assistants, transport workers, security staffers and those in environmental services in which he shared the higher positive test rates and encouraged everyone to get tested.

“We let them know they wouldn’t lose their jobs” if they had to miss work, Sivashanker said. And he, along with managers, told these employees “that we realize you’re risking your life just like any other doctor of nurse is, every single day you come to work.”

Some employees complained of favoritism in the distribution of PPE, which the hospital investigated. To make sure all employees were receiving timely updates as pandemic guidance changed, Brigham started translating all coronavirus messages into Spanish and other languages and sending them via text, which people who are on the move all day are more likely to read. The Mass General Brigham system offered hardship grants of up to $1,000 for employees with added financial pressures, such as additional child care costs.

Angelina German, a hospital housekeeper with limited English, said she appreciates getting updates via text in Spanish, as well as in-person covid briefings from her bosses.

“Now they’re more aware of us all,” German said through an interpreter, “making sure people are taking care of themselves.”

Beyond the Hospital Walls

The hospital also set up testing sites in some Boston neighborhoods with high coronavirus infection rates, including neighborhoods where many employees live and were getting infected. At least one of those sites now offers covid vaccinations.

“No one has to be scheduled. You don’t need insurance. You just walk up and we can test you,” Dr. Christin Price explained during a visit last fall to a testing site in the Jamaica Plain neighborhood.

Nancy Santiago left the testing site carrying a free 10-pound bag of fruits and vegetables, which she’ll share with her mother. Santiago said she’s grateful for the help.

“I had to leave my job because of [lack of] day care, and it’s been pretty tough,” she said. “But, you know, we gotta keep staying strong, and hopefully this is over sooner rather than later.”

Brigham recently opened a similar indoor operation at the Strand Theatre in the Dorchester neighborhood. Everyone who comes for a coronavirus test is asked if they have enough to eat, if they can afford their medications, if they need housing assistance and if they’re registered to vote.

Mass General Brigham leaders said they’ll take what they’ve learned dissecting disparities during the pandemic and expand the remedies across the hospital network.

“Many of the issues that were identified during the covid equity response are unfortunately pretty universal issues that we need to address, if we’re going to be an anti-racist organization,” said Tom Sequist, chief of patient experience and equity for Mass General Brigham.

Brigham’s work on health disparities comes, in part, out of a collaboration with the Institute for Healthcare Improvement.

“There’s a lot of defensive routines into which we slip as clinicians that the data can help cut through and reveal that there are some biases in your own practice,” explained IHI President and CEO Dr. Kedar Mate.

“If we don’t name and start to talk about racism and how we intend to dismantle it or undo it,” Mate added, “we’ll continue to place Band-Aids on the problem and not actually tackle the underlying causes.”

“Poverty and social determinants of health needs are not going away any time soon, and so if there’s a way to continue to serve the communities, I think that would be tremendous,” said Price, who helped organize Brigham’s testing program.

But has Brigham’s work lowered the risk of death from covid for Spanish-speaking patients? The hospital hasn’t updated the analysis yet, and even when it does, determining whether (or how) the interventions worked will be hard, Sivashanker said.

“It’s never going to be as simple as ‘We just didn’t give them enough iPads or translators and that was the only problem,’” said Sivashanker.

But Sivashanker said more interpreters and iPads, and better messaging to non-English speaking employees — plus all the other steps Brigham has taken during the pandemic — have improved both the patient and the employee experience. That, he said, counts as a success, while work on the next layer of discrimination continues.

This story is part of a partnership that includes WBUR, NPR and KHN.