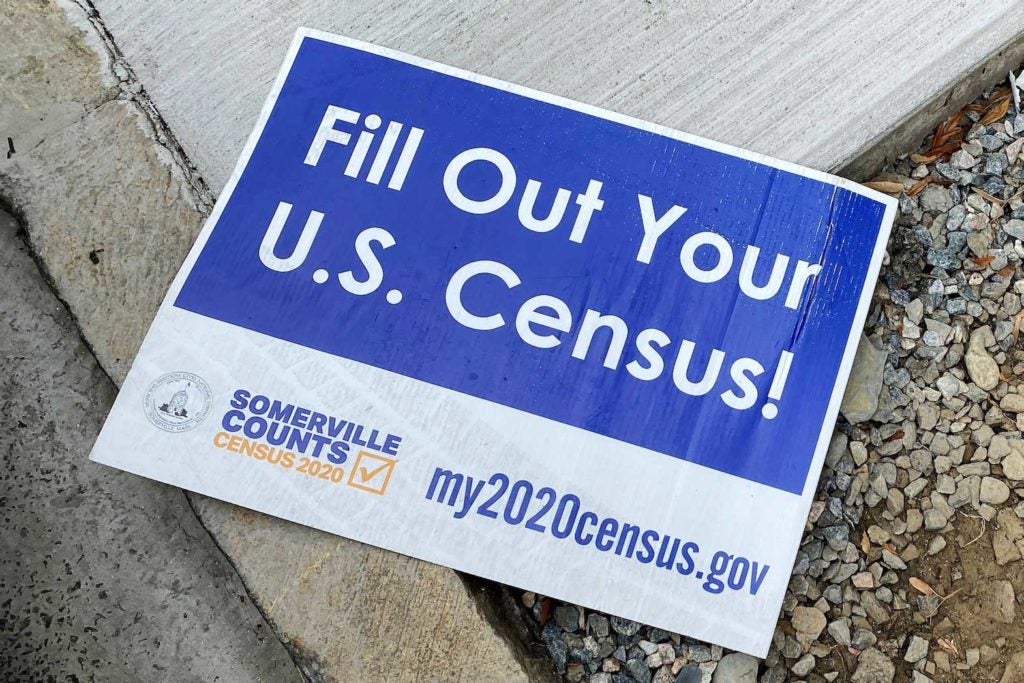 A sign encouraging participation in the U.S. Census lies on a sidewalk in Somerville, Massachusetts, U.S., August 4, 2020. REUTERS/Brian Snyder/File Photo

Texas, Florida and North Carolina are among the states that will gain congressional seats based on new population data from the U.S. census, a shift that could boost Republican chances of recapturing the U.S. House of Representatives from Democrats in next year’s midterm elections.

The overall U.S. population stood at 331,449,281, the Census Bureau said on Monday, a 7.4% increase over 2010 representing the second-slowest growth of any decade in history.

The release of the data, delayed for months due to the coronavirus pandemic, sets the stage for a battle over redistricting that could reshape political power in Washington during the next decade. States use the numbers and other census data to redraw electoral maps based on where people have moved.

Under the U.S. Constitution, the 435 seats in the House and the votes in the Electoral College that select the president every four years are divided among the 50 states based on population, with every state receiving at least one congressional seat.

The seats are reallocated every 10 years following the decennial census count.

The shift in seats reflects broader population trends that have seen the South and West grow more rapidly than the Northeast and Midwest for decades.

New York, California, Illinois, Michigan, Ohio, Pennsylvania and West Virginia will each lose one seat. California, the most populous U.S. state, lost a congressional seat for the first time in its 170-year history.

The reapportionment can come down to razor-thin margins. If New York had 89 more people in the census count, for instance, it would have kept its seat at the expense of Minnesota, officials said.

The gains for states such as Texas, North Carolina and Florida, where Republicans control the legislatures, could be enough to erase Democrats’ current narrow majority in the House. Republicans in those three states have in the past engaged in aggressive gerrymandering, the practice by which maps are deliberately redrawn to benefit one party over another.

“I’d expect, just from reapportionment, the Republicans to win a few seats,” said Kyle Kondik, an election analyst at the University of Virginia. Republicans only need to flip five seats in 2022 to retake the House.

Every state uses the census data to redraw lines both for districts and thousands of state legislative seats in a process known as redistricting.

That work cannot be completed until the census releases more precise block-by-block data, which is slated for September. The delay has raised concerns that states will be forced to rush through the complicated process of redistricting ahead of the next elections.

The U.S. Supreme Court ruled in 2019 that federal courts have no power to restrict political gerrymandering, although racial gerrymandering – which aims to curb the political power of specific racial or ethnic groups – remains unlawful.

The four most populous U.S. states – Texas, Florida and New York, along with California – have more than 110 million residents combined and will hold about one-third of the House seats.

The shift of seven seats among 13 states was the smallest number of seats moving among states in any decade since the current method of calculating them was adopted in 1941, officials said.

Overall, the U.S. population grew more slowly from 2010 to 2020 than in every other decade aside from the 1930s, during the Great Depression, census officials said.

Population growth has slowed as the birth rate has declined, while the “baby boomer” post-World War Two generation has aged. In addition, immigration sharply decreased due to the hardline policies of the Trump administration.

Utah’s population grew faster than any other state’s, increasing by more than 18% since 2010. Only three states lost population: West Virginia, which saw its population decrease by 3.2%, followed by Illinois and Mississippi, which dropped by 0.1% and 0.2%, respectively.

Washington, D.C., the nation’s capital, grew by 14.6% to a population of 689,545. House Democrats have passed legislation to admit the district as the 51st state, but Republicans oppose the measure.

The territory of Puerto Rico, which was devastated by Hurricane Maria in 2017, has seen its population decrease by 11.8% since 2010.