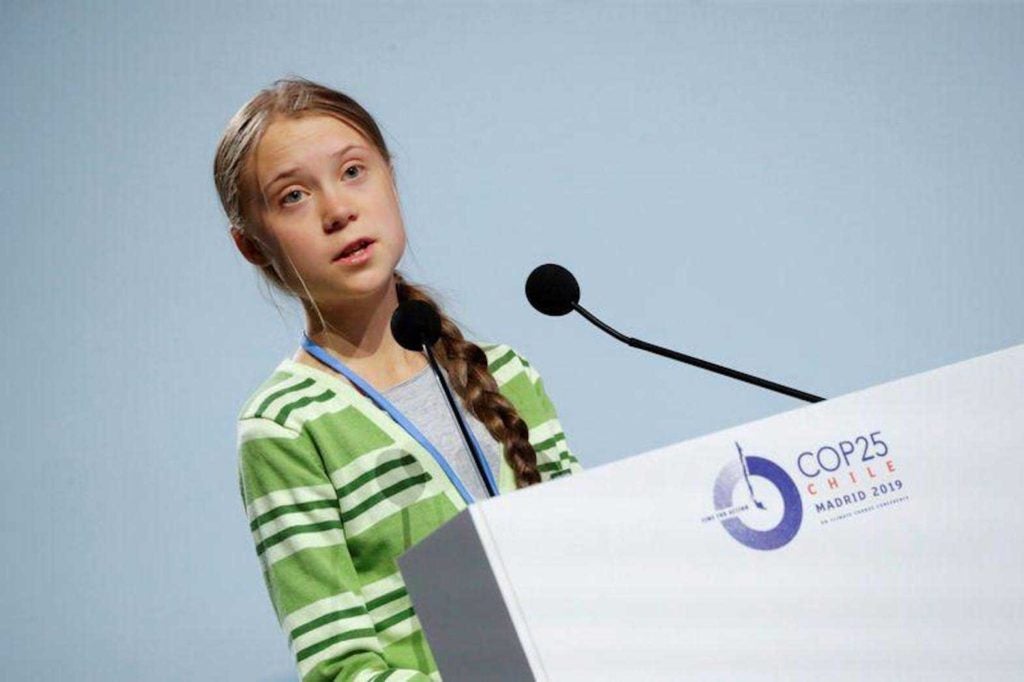 NEW YORK—The child is the mother of man.

I refer to Greta Thunberg who first held a one-person sit-down strike outside the Swedish Parliament in 2018, with a sign reading Skolstrejk för klimatet (School Strike for Climate). She was all of 15 years.

In what the media has tagged the “Greta Effect,” other students were quick to follow, not just in Scandinavia but globally, engaging in similar protests. By the very next year, organized  multi-city protests with over a million students each, were being held, and smaller student strikes occurred every week in different parts of the world.

Invited in 2019 to speak at the UN headquarters in New York City, on the occasion of the UN Climate Action Summit, to avoid flying, she sailed from Plymouth in the UK—no doubt a nod to the 1620 New World voyage of the Pilgrims on the Mayflower—to Gotham. Addressing the assembly on September 23, 2019, Thunberg opened her statement by speaking truth to power:

“This is all wrong. I shouldn’t be up here. I should be back in school on the other side of the ocean. Yet you all come to us young people for hope? How dare you! You have stolen my dreams and my childhood with your empty words. And yet I’m one of the lucky ones. People are suffering. People are dying. Entire ecosystems are collapsing. We are in the beginning of a mass extinction. And all you can talk about is money and fairytales of eternal economic growth. How dare you!”

Thunberg has since become internationally known, awarded various honors, including chosen in 2019 as Time’s youngest Person of the Year, and being nominated three years in a row—2019 to 2021—for the Nobel Peace Prize.

Is Greta Thunberg the Joan of Arc of the environmental movement, leading the charge against inaction and apathy, and being regarded with skepticism by many global leaders?

In spite of claims to the contrary, especially coming from those with vested interests in the fossil fuels industries, climate change is palpably real, the existential threat to our very survival and the planet’s.

Fortunately, President Biden takes the threat seriously, rejoining the Paris Accord, from which the former guy withdrew. (It bears repeating that the latter’s four-year presidency was an unmitigated disaster.) The Biden plan takes much-needed steps, the aim being for the US to reduce its carbon footprint by 50 percent by 2030. It is ambitious but necessarily so. Hopefully it will prompt other state actors to undertake similar efforts. That will take some heavy lifting.

What might get the global shakers and movers off their asses to undertake meaningful action would be the sudden drop in their profit margins. According to a New York Times article, “Climate Change Could Slash Global Wealth, an Insurance Giant Warns,” Swiss Re has calculated that  “[I]f countries succeed at holding average global temperature increases to less than two degrees Celsius above preindustrial levels — the goal set by the 2015 Paris accord, an agreement among nations to fight climate change — economic losses by midcentury would be marginal, … The company found that most countries’ economies would be no more than 5 percent smaller than would otherwise be the case.”

However, if nothing significant is undertaken, by 2050, “global temperatures are likely to increase as much 2.6 degrees.” Thus, “For poorer nations, which tend to be more exposed to warmer temperatures but have less ability to adapt their infrastructure and economies in response, the consequences would be far more dire.”

Interestingly, Swiss Re singled out Southeast Asian countries such as Malaysia, Thailand, and the Philippines, predicting that their wealth would be reduced by a third. Consider the economic damage wrought by Typhoon Haiyan on the Philippines in 2013: Between $12 to $15 billion in losses, with major rice- and sugar-producing areas devastated.

Annually the archipelago is hit on the average by 20 typhoons. According to the Asian Development Bank, typhoons and earthquakes cost the Philippines around $1.6 billion each year. One realizes how truly enormous was the damage wrought by Haiyan.

Even more disturbing, “Swiss Re also modeled the economic impacts of a 3.2-degree increase by 2050, which it described as the ‘severe case’ for temperature gains. If that happened, levels of wealth in Malaysia, the Philippines and Thailand would drop almost by half compared with a world with no climate change. The economy of Indonesia would be 40 percent smaller. India’s would be 35 percent smaller.”

The poor will get even poorer, even as their ranks expand because of the increase in poverty levels. The rising tide, literally, will float so many boats, but only those big and sturdy enough. Most of the smaller craft won’t make it, and those without boats—the majority of humankind—will perish.

MOST READ
usa MagSafe: Effortless and wireless charging for iPhones
usa Elon Musk Twitter Bid Restructured and Nearly Complete
usa University of Hawaii names nursing school after PH-born nurse
usa Monkeypox: Should the world be concerned?
usa Highway marker honoring Filipino sailors who settled in Virginia to be unveiled
usa Available vaccines, treatments for fighting monkeypox
usa The latest on the tragic Texas school shooting that left 19 children, 2 adults dead
DID YOU KNOW?
The Best Kindle of 2022: Which one should you buy?
A Beginner’s Guide to Buying a Vacuum Cleaner in 2022
Island Hopping in Tulum: The 12 Best All-Inclusive Tulum Resorts
How to Dispute a Debt and Win | Simple Tactics
The 12 Best Lat Exercises for Muscle Growth
Countdown to summer: tips for learning how to surf