County with many Filipinos legally declared a 'hate-free zone'

County with many Filipinos legally declared a ‘hate-free zone’ 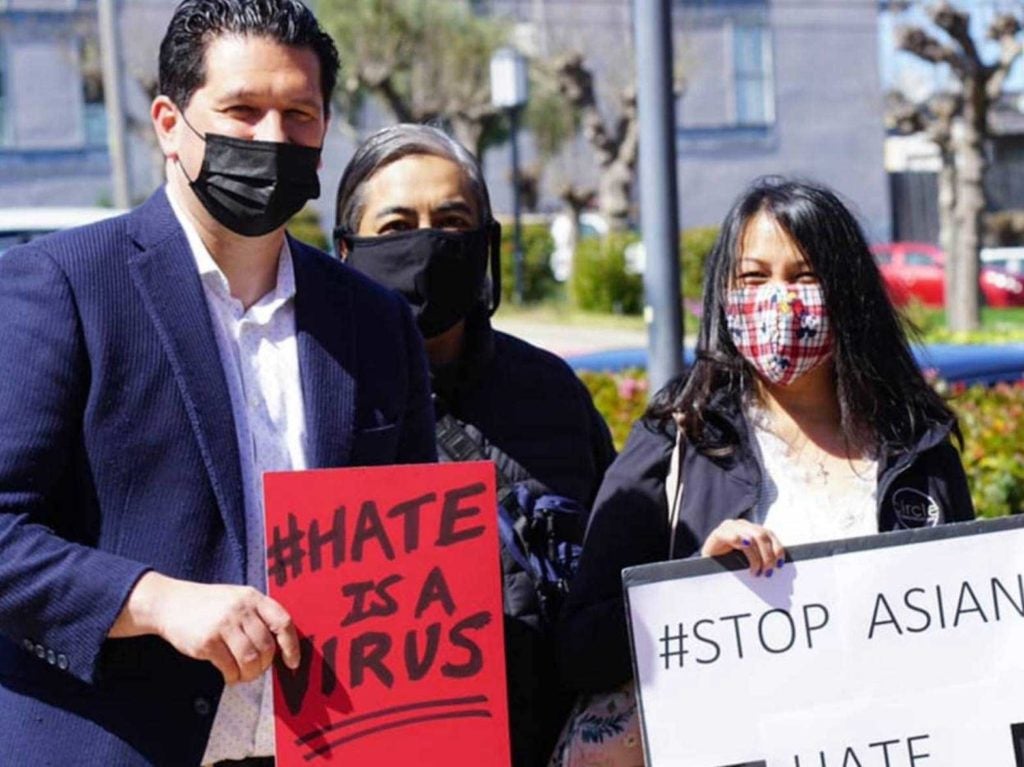 The youngest and now the head of the County elected leadership had vowed before hundreds of protesters last March to act against Covid rhetoric-spurred violence against Asian and Pacific Islander Americans.

Canepa’s words became fact April 6 when the entire board voted to declare the county a “hate-free zone,” affirming San Mateo County’s “commitment to the safety and well-being of Asian Americans and in combating hate crimes targeting them.” Canepa co-authored the declaration.

The County resolution also bolsters commitment “to protect and aid victims of hate acts, and to prosecute and curb hate crimes, related to COVID-19 in partnership with nonprofits, the County of San Mateo’s District Attorney’s Office, and our law enforcement partners.”

“Rumors and lies about Covid-19 have fueled mistrust, fear and racism against the Chinese and Asian American communities. We cannot let this disease divide us. Rather, this is an opportunity for us to say loud and clear that xenophobia has no place in our community,” said Canepa, who represents District 5, which includes Daly City, home of the highest concentration of Filipinos on the US mainland.

Three in ten San Mateo County residents are of Asian descent, the board noted.  In fact Asians outnumber all sectors in Daly City, South San Francisco, Millbrae and Foster City, according to US Census records.  The group is second most populous in Brisbane, San Bruno, Pacifica, Hillsborough, Belmont and San Carlos.

The previous U.S. president continues to brand the coronavirus as a plague brought over from China, effectively placing a bull’s eye on the backs of anyone of Asian descent, AAPI advocates say.

To date nearly 4,000 incidents of various attacks against Asian Americans across the country — from verbal to physical violence resulting in two fatalities here in the Sam Francisco Bay Area — have been tracked in the past year alone by multiple policy and advocacy groups.  Community leaders believe the number reflects underreporting because AAPIs are known to avoid confrontation for fear of retaliation. There is also a lack of trust in government. Filipino American community leaders hailed the resolution as a welcome deterrent to the “other epidemic that is racism.”

“Bigots harboring ill will against Asian Americans — particularly the older and therefore vulnerable members of our community — will think twice or pay for their criminal behavior with potential jail time,”  said Bettina Santos Yap, founding president of ALLICE Alliance for Community Empowerment.

Following  is the full text of the legislation:

WHEREAS, Asian Americans and Pacific Islanders have contributed to the success of the United States economy for more than a century, including the building of the Trans-Continental Railroad; and

WHEREAS, Asian Americans and Pacific Islanders bravely fought and died in several US conflicts and wars; and

WHEREAS, anti-Asian racism and hate are not new and have a long history in the United States; and WHEREAS, since the beginning of the coronavirus pandemic, hate crimes against Asian Americans and Pacific Islanders (AAPI), including verbal, physical, and psychological abuse, have increased exponentially; and

WHEREAS, although largely unreported, incidents of racism, hate, and discrimination against Asian Americans and Pacific Islanders have been occurring throughout San Mateo County. The increased rates of anti-Asian hate crimes impact community members of all ages, and are often directed at the most defenseless populations, the elderly and youths; and

WHEREAS, violent attacks on Asian Americans and Pacific Islanders or anyone for any reason is irrational, but also a felony; and WHEREAS, the World Health Organization (WHO) and the Centers for Disease Control Prevention (CDC) recognize that naming COVID-19 by its geographic location or linking it to a specific ethnicity perpetuates stigma; and

WHEREAS, anti-Asian racism and hate must never be ignored or tolerated; and

WHEREAS, this increase in racism is leaving a traumatic impact on Asian American youth in the county. It is critical to acknowledge and condemn the targeting of hate, particularly for the next generation of Asian Americans, to move forward and create a more equitable San Mateo County.

AND RESOLVED FURTHER that the Board of Supervisors of San Mateo County condemns hate crimes against Asian Americans and Pacific Islanders, and declares San Mateo County as a hate- free zone.