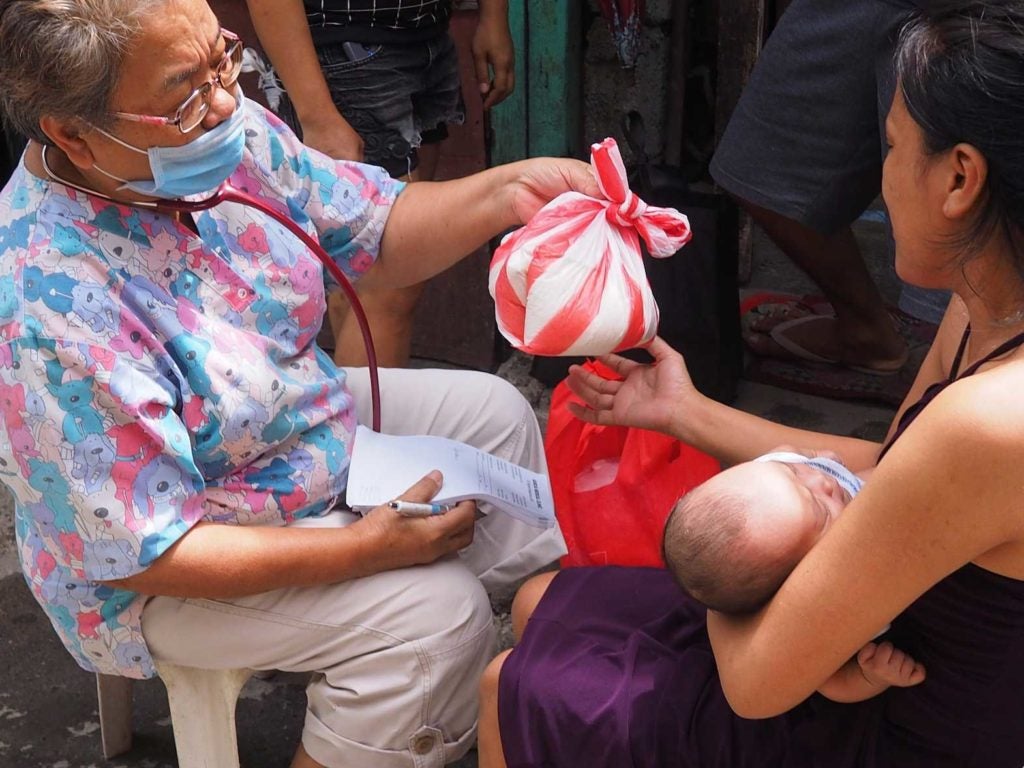 Dr. Ginny Pineda Garcia “was unstoppable in helping families, communities, her country, and even internationally.” CONTRIBUTED

In April last year, I wrote a story about Dr. Virginia “Ginny” Pineda Garcia, a pediatrician who served the poor communities in Barangay De La Paz and Barrio Santolan in Pasig City, Philippines (In the Time of COVID: ‘Love life and it will love you back!’ (inquirer.net)). She died April 2 (Good Friday) from COVID-19 complications a week after her own son Gabino, 37, died from COVID.

In the end, even the doctor could not save her son.

Dr. Virginia “Ginny” Pineda Garcia, a community pediatrician in Pasig City, Metro Manila, once used to visiting patients in the urban community in Barrio Santolan and Barangay De la Paz, had to make do with her clinic as a last refuge for her son Gabino, 37, who contracted COVID-19 last week of March.

Hospital beds were full. Fortunately, some of her doctor friends were able to alert her that a bed was available. Gabino was rushed to the hospital but died on the way.

By then Dr. Ginny and her husband, photographer Oliver Garcia, had also contracted the virus. They were admitted to ER, and Dr. Ginny was given life-support immediately. However, she did not survive. She passed on Good Friday, April 2, almost a week after her son died.

Dr. Ginny was mourned by family, friends, colleagues and classmates from UP High School, University of the Philippines, and Far Eastern University College of Medicine.

In his homily at an online memorial Mass, Father Patrick Falguera, S.J., said: “We remember in thanksgiving, we celebrate with love, and we believe in forgiveness. In remembering Ginny, let us, instead of facing the sunset, face the sunrise.”

To Dr. Cho Chiong Tan, a neuropsychiatrist who helped his friend in her various projects, the cheerful doctor was a go-getter who practiced medicine where it was needed most. From offering free consultations to pregnant moms to giving vaccinations to children to organizing a TB (Tuberculosis) prevention and treatment program right in the heart of the community, with patients and their families. “She was unstoppable in helping families, communities, her country, and even internationally.”

Dr. Vicente Ramirez Porciuncula, another classmate in FEU, expressed admiration for his friend’s dedication to her vocation. 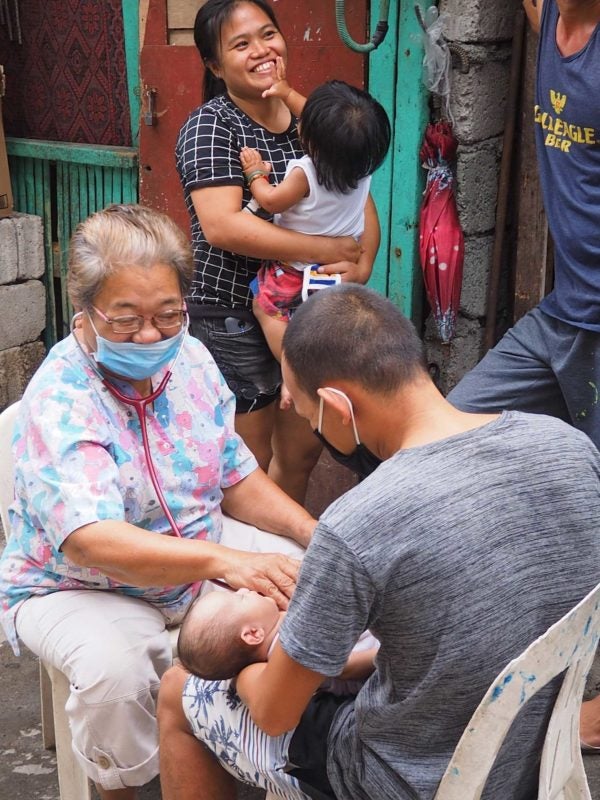 The cheerful doctor was a go-getter who practiced medicine where it was needed most. CONTRIBUTED

As medical interns, he remembered Dr. Ginny volunteering after an earthquake hit Mindanao. “She was the only female in the group, the lone rose among the thorns. She wanted to know first-hand, how the people were. Then when we wanted to sit with the FEU board to press for changes to improve health delivery to the urban poor in the Fairview area, it was her voice that they heard. It ended with the FEU administration building a better, bigger, and more modern hospital than the one downtown Manila.”

Dr. Romeo Quijano, Dr. Ginny’s friend and colleague from early UP days, who was also a classmate at FEU Medicine, related how the young medical student knew how her life would proceed early on. “Ginny was a fighter and defender of the poor, even when we were university students and medical interns. She was a passionate medical activist from way back.”

Dr. Telly How, another classmate, relates how she was invited by her friend to support a pandesal-breadmaking class at Fabella Hospital in Mandaluyong, an initiative to offer livelihood programs for single moms and their children. “We ended up the session literally covered with kneading flour, but everyone loved it!”

Dr. Ginny was an inimitable spirit, and a hard-headed one, says her eldest sister Baby de la Pena, who thanked those who supported their family in their time of grieving. “She knew what she wanted, and she pursued it.”

Pathologist Dr. Jess Socrates, a UP High Class ’66 and pre-med school classmate, recalled how Dr. Ginny had approached him to help fund her TB project. “Funders need results: pictures of patients before and after, their families, financial statements. Ginny submitted them right away, and we were impressed.” The project would have gone off the ground had COVID-19 not taken over.

“I wonder what would happen to the medical clinic, and the programs that our classmate has started,” Dr. Socrates says with concern.

Friends from UP High Class ’66 who were at the mass were also awed by the extent of their classmate’s work and involvement. How she had evolved from the spunky old days of their youth to the caring doctor who placed the patient’s interest above all else.

One of them, who prefers to remain anonymous, said: “For Ginny, the doctor must be caring—mapagmamalasakit sa pasyente. Her TB project emphasized that. The doctor must go to the patient and their family, not the other way around. She knew the probability that the disease is present in the home, so the family must be treated as a whole.”

Hosted by UP High Class ’66 alumna Bopeep Franco, the online tribute Mass was organized by Lucy Lazo and Pura Castillo-Romero.

Dr. Ginny’s husband Oliver, recovered after a hospital stay in intermediate care, is back in their home in Barangay de la Paz. This time, however, it would be his daughter Luningning, 43, who would be confined in the hospital because her fevers have not subsided.

While the grandfather is still in quarantine, grandson Luis, 12, who has contracted COVID, is healed and waits for his mom to recover.

“I’ve stopped counting days,” says Oliver on the phone, “They come in a blur: night, day, night. Soon, I hope it will be day again.”

He has not even seen the cremains of his beloved wife and son. They are contained in small urns in their second-floor living room. The hub of the house, the room is filled with Dr. Ginny’s favorite art works, and flowers from their garden—sampaguita, champaca and ylang-ylang, and woven mats and bags she collected from her various trips and assignments.

Dr. Ginny had also volunteered to serve in refugee camps in Laos, Thailand, Cambodia and Vietnam, as well as poverty-stricken areas in Ethiopia and Sierra Leone. Why? Here is an excerpt from her speech on why she volunteered in these countries:

“Ola During Children’s Hospital is a 200-bed hospital, and in the rainy season we have two to three patients in one bed, so it makes for 400 to 600 patients at some point. And when you are assigned in the emergency room for 24-hour duty you will see some 30 to 40 admissions at some nights: from bleeding gastro-intestinal cases to convulsing patients to cerebral malaria and children gasping for air. You just watch because there’s not enough oxygen for everyone. So, you just watch them die.

“I cry not only because I miss my family, I cry because I see seven to ten deaths many times in a week and their bodies filing in one corner of the emergency room. I cry for them.

“I literally live in the hospital in a small corner near the door of the emergency room…to see my patients survive at least 24 hours and hope that in the next 48 to 72 hours they are still with me…so they go home alive.”